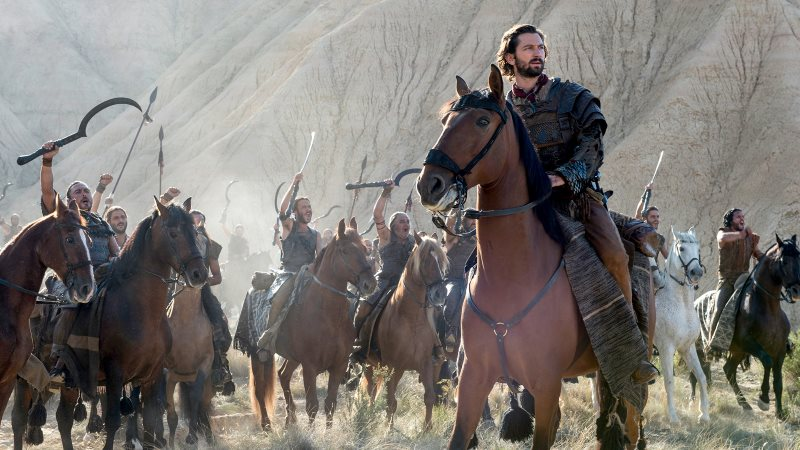 “Blood of My Blood” is the title of this week’s episode. This refers to the Dothraki expression used by khals to their bloodriders, the three chosen warriors who follow their leader into battle. Specifically, it refers to their bond, a sort of blood-brothers type linkage that signifies the martial creed and the filial connections therein. The Dothraki value all kinds of relationships – master-slave relationships, carnal relationships, polygamous marriages – but the bloodrider bond is the most sacred, the position of highest respect in the khalasar, second only to the khal himself. Where the khal is the living embodiment of war, of the Great Stallion, the bloodrider is the symbol of the Dothraki: a reaver, a horseman, a brutal force of death kept only in check by his sworn duty to the khal.

Not all of the oaths in Game of Thrones are as bloody as the Dothraki’s, but a good portion of them end in blood. Marriage, for example, has a poor track record in this series when it comes to nonviolence. Sansa Stark, Edmure Tully, Joffrey Baratheon, even the beginning of Daenerys Targaryen’s wedding was more than a bit unpleasant. Whether its murder, poison, sexual abuse or your wedding guests getting murdered, what is supposed to be a union of joy almost never ends in joy. The happy, the show seems to indicate, do not wed, but live freer. Love is not bondage, but the relationship shared by Jon Snow and Ygritte, based on “you know nothing” and lots of sex in caves. Love is not found in great ceremonies but in mutual respect, such as the love shared by Daenerys and Daario Naharis. Love has nothing to do with the institution of marriage, because the institution signifies an ending.

Just as common as the oath of marriage appears to be the oath of the Kingsguard. People get named and unnamed from that supposedly elite group many times over the course of the series. Sandor Clegane, the Hound, held the position, briefly, before forsaking his oath and abandoning the king because of a little fire. In the most recent episode, Jaime Lannister is dismissed from their ranks due to a lack of godliness, despite remaining a member of the Kingsguard even after killing the Mad King. Barristan Selmy’s dismissal, of course, was wildly more dramatic, choosing to serve Daenerys rather than be sent to, in his words, “a hall to die in, and men to bury me.” Sacred and powerful as the oath of the Kingsguard is, with their big book of tales and white cloaks, it doesn’t protect Meryn Trant, possibly the least honorable knight in the whole kingdom (second only to Bronn, of course). Trant, who kills Syrio Forel, strips Sansa in the Red Keep and enjoys beating little girls with a willow switch, was, supposedly, the most honored man for King Joffrey, a grand old member of the guard.

So you have a man who flees from fire, a man who kills his own king, and a man who has no honor, that comprise the worst elements of the Kingsguard, compared to the one decent man, who leaves his oath to serve a rule with more dignity. So much for oaths, then. If the institutions of love and honor are rotten, what purpose do pacts and promises serve? Certainly they have given rise to organizations like the Brotherhood without Banners, whose only loyalty is to each other, with a mission to save the world from corrupt lords wrapped up in oaths. Tyrion’s treaty with the slavemasters seems shaky at best, and foolhardy at worst. Sam’s return to Horn Hill is a violation of his promise to his father, Lord Tarly, even if it is cloaked in the commands of the Night’s Watch. On the whole, the series seems to claim that such oaths are useless, mindless products of an older world, and we’d all be better off without them. Indeed, Robb would be alive and free to marry without his promise to Walder Frey, Arya could live without her quest for vengeance, and the man most bound by oaths, promises and pacts, Ned Stark, might still be alive if not for his stubborn dedication to duty, to honor.

This episode, however, does not damn the pact the way the show does. “Blood of my Blood” reaffirms many things we’ve already seen so far in the season. The way Sansa and Jon are reunited is a mirror to Bran and “Cold Hands” Benjen’s meeting, an informal recognition of the bond of family. Sam and Gilly’s own bond, falsely established to gain them entrance into Horn Hill, ends up drawing them closer together, forging a real family bond as they head out into the unknown. Jaime and Cersei bond over taking back things that belong to them, weird and obsessive as their relationship is, but it furthers their connection to each other, and to their name, to do as “father would have wanted.” To complete the picture is Daenerys, echoing Khal Drogo’s speech in season one, as she names her whole khlasar bloodriders. The social institutions of Westeros, the little bonds and connections that drive the plot forward in so many fascinating ways – to say they could be unimportant in the world of Game of Thrones is to ignore their contribution to the bedrock of the drama. One man breaks his oath, a thousand swords are raised in vengeance. Another fulfills his and a thousand voices sing his praise. One thousand oaths are made to a woman riding a dragon, and entire kingdoms rise and fall.