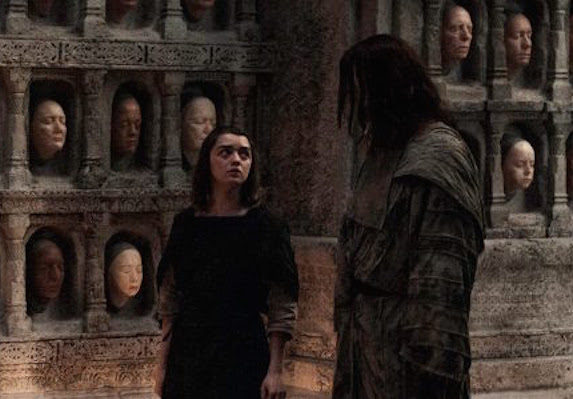 Game of Thrones: How I Learned to Stop Worrying and Love the Faceless God

Dear readers, I cried during Game of Thrones last night. This was new for me. In my time watching the series, I’ve laughed, shouted, danced, made love, eaten, or groaned as it aired. These days, I usually sit back in my exceedingly comfortable recliner and meditate, fingers crossed, on the events as they unfold, like some diabolical villain watching the world turn on his screen. But last night’s episode, “The Door,” had me in tears. Hodor’s origin and end, the stunning revelation of “hold the door” and Bran’s total douchebaggery, had me bolt upright, staring at the rolling credits, salty streams all over my face. It was a moment of severe pathos – the show I thought I was inured to, the entertainment I rely on for story and imagery – all suddenly cut me to the quick in a new, altogether awful way.

But I’m not writing today to tell you how Game of Thrones succeeded last night. I’m here to ask you to consider how the show, the writers, and the producers continue to fail us. Try, if you can, to look past Hodor’s death, past Jorah’s quest for a cure, past Tyrion and Varys’ encounter with a newer, redder woman, past Jon and Sansa’s plans to retake The North, and look at Arya, a stranger in a strange city. For the past season and a half, she has been a guest of the House of Black and White in Braavos, training to be a killer, a ‘Faceless Man.’ In that time, she’s killed Meryn Trant, the Kingsguard who slew Syrio Forel, way back in season one, and led a handful of supplicants of the Faceless God to their deaths as well. But so far, it’s no comparison to her time with the Hound, where she got her revenge on Polliver and Rorge, not to mention inciting a few other deaths at the hand of Sandor Clegane. It’s an oddity, that Arya should kill less while training to be a killer, but I suppose more bloodshed is yet to come (SPOILER ALERT: more bloodshed is always about to come).

That, certainly, is chief among the things that frighten me. Not death, or the general way the show comports itself around the subject. No, what scares me is that after all Arya has done, after how bloodthirsty she’s shown herself to be, in the eyes of her trainers, she still has a long way to go. The Girl With No Name tells her that she’ll never really be one of them, and The Man With No Name agrees. Arya has a hard time letting go of things: her lineage, her name, her vengeance and her personality. The path she has chosen demands total sacrifice, total surrender, and no one is sure if she can practice that, let alone feign it long enough to learn what she needs to kill everyone on her list.

And yet, still they train her. Still they give her missions, poison, instructions and objectives. Despite all evidence to the contrary, they present themselves as faithful in Arya’s abilities to be a killer of men. I can’t make up my mind whether they want her to fail or whether they want her to succeed. To fail would mean blindness (again), death, or worse. To succeed would continue to Arya’s progress down the darker path, and to my mind, her path has been dark enough. We see, too, Arya’s struggle with this issue in “The Door.” On assignment to assassinate Lady Crane, she watches the drama of her former life unfold, from Robert’s death to Ned’s execution to Sansa’s marriage to Tyrion. Some of the story she may have known, some parts she may have not, but watching her face, a myriad of emotions fly across it. Arya is transfixed by the theatre, by performance. She plays many roles, as Faceless Men do, and the very notion of playacting is appealing to her. But it is her life that she is witnessing on the stage, her shattered world in Westeros that comes alive before her. It’s a lot to take in, a lot to think about, and we can see Arya nearly break down at points.

At the same time, this is all she’s thought about, for months and years, since her family’s nigh-total extinction. These are the memories she fights to repress in The House of Black and White, but they are what brought her here, they are the parts of her that she has to hide, like Needle, Jon Snow’s gift to her. We watch Arya struggle to maintain composure, but also struggle to not let them go, to keep these family members (read: raunchy actors portraying her family members) just a little bit longer, to make the magic of the stage undo the violence of her life, if only for a few minutes.

This is where the show fails me. Not the ‘play within the HBO series,’ not the weird contortions Masie Williams makes to look like she’s suffering, but the premise that Arya’s story is going to lead somewhere with a happy ending. The tide may be starting to turn, with the Stark children all reuniting slowly and the setup for Daenerys to return with Euron to Westeros, but Arya is not a part of that tide. In a world of no child left behind, just as Rickon was swept under the rug only to be produced as a convenient motivator for Jon Snow, Arya’s path is basically murder fetishizing. She doesn’t get friends or family (not ones she can keep for long, that is). She doesn’t get allies. She doesn’t even get to have a direwolf. No, Arya gets to learn the best ways to kill people, with poison, with knives, with sticks, fists, rocks and all sorts of horrible things. In a world of growing horror, between Sansa and Arya, we see the worst of it. But where Sansa has been a victim for the majority of the show, Arya has almost always been a motivator, a doer, a killer.

Is that who the show wants me to respect, to believe in? The story in Game of Thrones is heavily sympathetic to the Stark children, and everything, from the lighting to the musical cues to the way the extras and scenery reacts to them, leads us to believe that they are our heroes, the agents of change, the protagonists along with Daenerys. Where Bran got a three-eyed raven and a Warg dream-team, Arya got the Hound, the Brotherhood, the Faceless Men. Her teachers are always bloodier, her allies always more morally dubious. With the spotlight the show casts, we are told to put our trust in her story, to have faith that things will right themselves. But believing in Arya is becoming harder and harder to do. She walks with the promise of righteous vengeance, but the path of Faceless God only promises death. After all, all men must die.