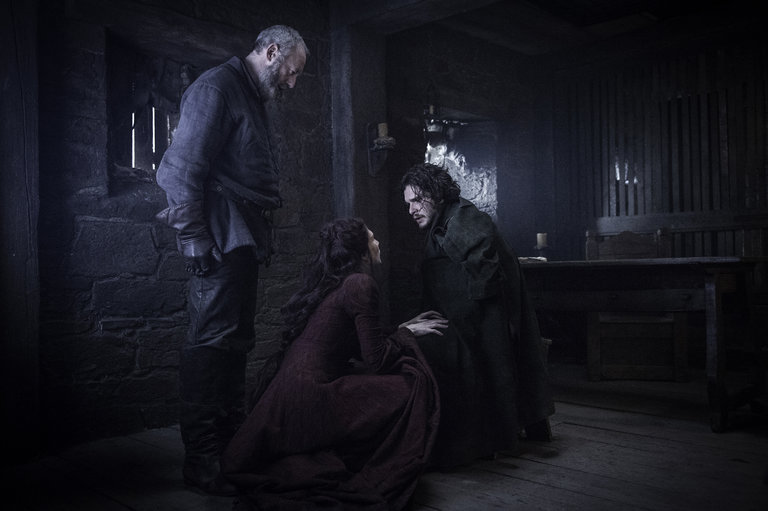 Game of Thrones: Give Me that Old Time Drag

Well, season six of Game of Thrones is off to the races. The board is set, the pieces are moving, and the plot is unfolding like a complex origami maze. And like any origami, it takes a long time for the full story to reveal itself entirely. Yes, we’ve now hit the start of what TV writers often refer to as “the slump.” With the first and second episodes out of the way, the third is more often than not setup, suspense-building, an hour full of long pauses, witty exposition, and melodramatic emotional explosions. And you can expect to see that for the next three to five episodes, until the end starts to come around the corner (put this one in your prediction corner: the Bolton-Umber-Karstark alliance will attack Castle Black towards the end of this season).

Game of Thrones, all things considered, does an pretty good job of managing “the slump.” Any television series worth its salt makes slumping seem fun, meaningful, even vital to the narrative – after all, it does account for a significant chunk of episodes. Weiss and Benioff (the two faces of Game of Thrones’ producing staff) donate a more than a healthy amount of that time to sex and violence, which keeps their audience glued to the screen. They throw around witty banter and stunning one-liners like confetti and even occasionally tie comedy to significant plot events. Given that the show is based off of a fantasy series, the producers also throw out a hint to the books every once in a while, to drive the fans crazy, and it has the added bonus of spinning the rumor mill fast enough to beat an egg.

Episode three, “Oathbreaker,” is no exception to their treatment of “the slump.” Given that episodes one and two dealt with some rather earth-shaking revelations, much of Sunday’s show devotes time to reflection, absorption. Daenarys faces the judgment and scrutiny of the widows at Vaes Dothrak, and learns of one possible fate, one potential future that may be in store for her. Bran Stark advances further in his dream-world recollection of his father’s past, and is forced to confront the possibility of Ned’s dishonesty. Jon Snow barely speaks after he rises from the dead, but nearly all of the time we spend at Castle Black focuses on his recovery, both physically and among the men at arms. He ends the episode by executing his murderers, a fitting last duty for his term as Lord Commander. Everyone has a lot to process, a lot to think about, before they can fully decide on a course of action, one way or another.

And yet, even in this slump of brooding decision-making, there is a greater sense of speed, of progression in this season. Many have remarked that the episodes seem to moving at a faster pace, switching been scenes and characters and story arcs with great rapidity. In a sense, that is true: with the reunited plots of Bran and the Iron Islands, HBO’s writing staff must be working double time to secure enough screen time for all the story they can get. I don’t imagine we’ll be seeing much more of Dorne this season, but our central stories, in King’s Landing, at Castle Black, beyond The Wall with Bran Stark, Winterfell and the Boltons, Tyrion and Varys in Mereen – they aren’t going anywhere. And it’s in between all of that the writers must explain the Tower of Joy, the sudden appearance of a new Greyjoy brother, Sansa’s journey north and Arya’s transformation into a Faceless Man. No wonder things seemed to have sped up.

And if things are speeding up, can we really call it a slump? With everything that’s happening, everything that’s yet to happen, many are beginning to wonder if the show will end prematurely. If that’s the case, it’s not so much that Game of Thrones is entering a slump, but rather, what is starting to look a lot like the endgame. In the middle of this season, we’re getting closer to the truth about Lyanna Stark and Rhaegar Targaryen. The remaining Stark children are poised for a reunion of epic proportions – Bran in the far North, Rickon at Winterfell, Jon just about to leave Castle Black and Sansa just about to arrive. Cersei has one child left who seems determined to put himself in more and more danger, bringing the witch’s horrible prophecy to full fruition. These are not the marks of a show that is entering a slump. This is the deep breath before the plunge. This is the stillness before the storm. Great things are on the wind, in Westeros, across the Narrow Sea, in great chambers and muddy holes. The best, as they say, is yet to come.