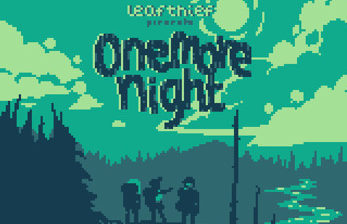 Sweet Bytes is a series of articles that highlights fun, unique video games that you can play through in an afternoon.

Onemore Night is an interesting little morsel of a game. Its origins give it its character: it was built for GBJAM 4, a GameBoy-themed game jam where designers have only ten days to complete their games. As a result, Onemore Night is nostalgic, graphically charming, and very, very short.

Developer Leafthief presents Onemore Night as a visual novel, a fitting description. Gameplay is limited to a few dialogue choices. These choices don’t change the story’s outcome—instead, they let you explore your friendship with two other characters, Holly and Nish.

Onemore Night focuses on a single night of camping, chatting, and drinking during the last summer before school ends. The friendship between these three girls—Holly, Nish, and the player—anchors the game. It’s a snapshot of teenage hopes and fears, constantly aware of the impending end of adolescence.

And, like that ending, the end of the game comes all too quickly.

I finished my first playthrough of the game in under five minutes and felt like I had barely scratched the surface of these characters’ lives. Starting up the game again gave me a little bit more dialogue—on each play, you only have time to speak to one of the characters one-on-one. After about three playthroughs, it began to feel like I had gotten as much out of the game as I was going to. There were still more dialogue choices to explore, but it became repetitive to go through the dialogue that doesn’t change based on your choices.

There were even a few choices that felt like they should have given different dialogue, but had no effect. For example, there’s a point where you can choose to drink with either Holly or Nish, but the following dialogue was the same no matter which one you chose. Perhaps there was more planned that had to be cut for time or other reasons—it was made during a game jam, after all—but moments like this made the game feel unfinished and left me wanting more.

In fact, that may have been the desired result. The game has a wistful feel to it. In the end, it reflects on the lack of closure we often feel when a part of our lives comes to an end. The dialogue implies subtextual stories that the game doesn’t give you time to explore fully, just as life leaves many things left unsaid.

The old-school graphics and sound effects enhance the game’s nostalgic feel—especially for players who associate those retro elements with their youth. Beautiful and expressive, the pixel artwork steals the show.

Overall, Onemore Night was a thought-provoking little game with execution that suited its themes, but it still left me wanting more… just like those old high school summers.

Onemore Night is available for pay-what-you-want on Leafthief’s website and for free on Indie Game Stand.