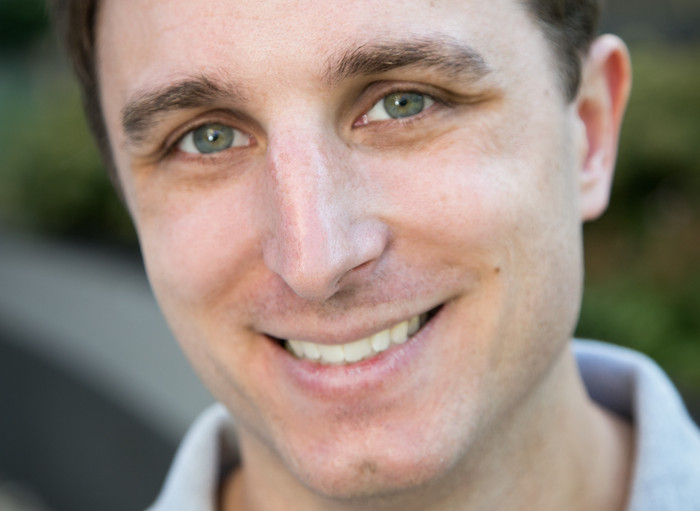 Matt Arnold is nominated for his performance in the ensemble of Terra Nova. His character’s wit and good cheer do not save him from an untimely death in the icy depths of the South Pole. Arnold supplements his acting credentials with designing fights for several local companies. We chatted about playing a blind character, about what makes a great show ensemble, and about how Matt once helped me safely get bonked in the face with a stone pestle.

What made you decide to be an actor?
I’ve been acting since middle school; I was very active in my high school’s drama club back home in Rhode Island, and had decided pretty quickly that I wanted to be an actor.  Lots of credit goes to my teacher at the time, Myke Wilkinson.  Not only did he help me to foster a love of theatre and an appreciation for what it can do as an art form, but he also instilled in me a level of discipline and professionalism that I’ve tried to make a cornerstone of my work to this day.

What was it like to trudge through the Antarctic tundra and suffer snow blindness as Bowers in Terra Nova?
Terra Nova was a physically demanding piece.  A significant part of the work during rehearsals was exploring and understanding how the cold affects a person’s body and the different ways in which we react to it.  One of the biggest challenges was knowing that all five of the explorers were going to die, but carrying on in the hope that the expedition would make it home.  There was lots of grim fatalism and gallows humor about freezing to death backstage, but when we were in character keeping that hope alive was the most important thing.

I had actually played a blind character before, so I was excited to give it another shot when I found out Bowers would lose the use of his eyes.  Wearing the blindfold felt kind of like playing on Easy Mode, but snow blindness hurts – it’s like a sunburn on your corneas – so the blindfold was more there to ease Bowers’ pain than to try and depict blindness.  Performing the final scenes without the ability to see what was going on with the other actors who were right next to me was disorienting, but one of the most memorable moments of the show for me came from that part.  There was a moment where James Hayward and I were busying ourselves in the background and he (as Dr. Wilson) give me a drink from his flask.  I never knew until maybe three-quarters of the way through the run that after I took a drink Wilson went to take a swig for himself and discovered there was none left.  I felt genuine remorse that I’d been taking the last of his booze every night even though it was a wonderful acting moment that James had planned and executed entirely on his own.

You also performed in The Farnsworth Invention, another Flat Earth show with a fantastic ensemble. What elements help a group of actors form a strong collective, while still maintaining their idiosyncratic character choices?
Theatre is a team activity, and like any other team activity it works best when everyone is doing their part.  The best ensembles are the ones where there isn’t a hierarchy based on number of lines or the significance of a role, but rather every member of the cast is bringing something unique to the table and giving just as much of themselves as everyone else.  In Farnsworth, I think we could have done a performance where we scrambled the casting by drawing names out of a hat; everyone knew the script well enough, and it would have been neat to see what everyone did with each other’s roles.  It wouldn’t have been quite the show that we made, though, and Sarah Gazdowicz did an excellent job of casting everyone in the roles that brought out the best in them as individuals and as an ensemble.

You are a fight director as well as a performer. How does your knowledge of and training in stage combat inform your work in acting?
Fight work has definitely heightened my physical awareness, and affects the way I move, especially around other actors onstage.  With even just a little bit of stage combat training you become very aware of where everyone else is in relation to you.  One of my weaknesses as an actor is that I tend to get wrapped up in the text which can lead me to lose track of my physicality, and the awareness that comes with fight work has helped with that tremendously.

P.S: Thank you for keeping me from bonking my head against a proscenium arch in Theatre@First’s Knight of the Burning Pestle.
Any time!

What’s next for Matt Arnold?
I’m currently in Flat Earth’s Tales of a Fourth Grade Lesbo, which opened March 11.  I’ll be doing some tech and design work with Unreliable Narrator and Theatre@First later this year, and I’m still actively auditioning around Boston.  I started a new day job in January so I’ve had to adjust the ways in which I make time to pursue theatre, but there are so many wonderful theatre companies in the area that I’d love to work with given the opportunity.  My ultimate goal is pursuing the elusive Actor’s Equity card – that would be a very important milestone for me.