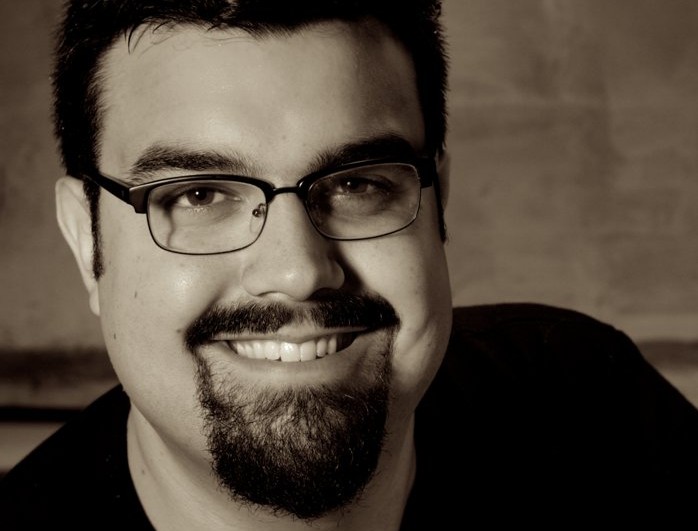 Jake Scaltreto is nominated for his Outstanding Direction of Flat Earth’s Theatre’s Terra Nova. A cofounder of Flat Earth, Scaltreto has directed, produced, taken photos, and done graphic design for the company. We talked about how directors should avoid micromanaging, what photography and directing have in common, and how it was that he and his colleague accidentally founded a theater company

Growing up in Watertown, you were a member of the Watertown Children’s Theatre. When did you know you wanted to direct plays?
You’ve done your research! Yes, I was a member of the WCT during my formative years, which is really where I fell in love with theater. I was always the kind of kid who was putting on some kind of performance, on a stage or off, and often at inappropriate times. Theater gave me an outlet for expressing myself in a way that other activities didn’t. Possibly one of the most significant decisions of my life (in the sense that it’s impact has continued to affect me twenty years later) was the day I quit little league to do WCT. It’s a decision I’ve never regretted.

As for how my love of theater evolved into becoming a director, well that’s more or less by accident. After High School I figured I was done with theater. I was working full time, and it just wasn’t really part of my life any more. It was my best friend and Flat Earth cofounder, Kevin Mullins, who brought me back into the fold when he asked if I’d direct his show, Joe. Directing was not something I’d ever really considered before, nor was it something I knew the first thing about. What I didn’t expect was that it would reignite my love of theater, and that I’d still be doing it ten years on.

What would you say your job is, as a director?
I’m still figuring that out, I think. I feel like the more I work at it, the more I learn from my experiences, and from those I work with. When I first started directing I had no idea what I was doing, and made the mistake of acting like more of a puppeteer than anything else. Mercifully, one of the actors pulled me aside and said, “let us do our jobs!” That comment has informed, I think, my directing philosophy more than anything else I’ve learned since.

For me, directing is all about making the big picture come together in a way that is cohesive for the audience. When it comes to working with actors, these days I tend to use a very light touch with nudges here and there. I try to avoid micromanaging as I’ve found that the best performances are those which the performers find for themselves (with some guidance along the way from me). I find myself focusing more on the mechanics of things such as how the piece flows from scene to scene, how the characters interact, and how the whole thing will come together on a stage.

It’s all about pulling back and trusting those with whom I collaborate (actors, designers, etc.) to do their thing while I maintain a macroscopic view of the whole endeavor, guiding it along the way.

What inspired the founding of Flat Earth Theatre?
I wish I could say there was some grand plan or vision that led to the formation of Flat Earth, but the truth is far more mundane. It probably all began around the summer of 2005, when Kevin approached me with the idea of collaborating with him on a staged reading of Howard Zinn’s Marx in Soho, a one-man show featuring Karl Marx. That project never really came together, though it planted the idea that we should do something. After a few more fits and starts trying to come up with a project, we eventually committed ourselves to producing a play that Kevin had written, Joe.

That first production was very much in the spirit of The Little Rascals putting on a show. We had no plan, no budget, and no experience. Between our first rehearsal and opening night was something like fifteen days. But it came together, and a decent number of people actually came out to see it. For me, it was an exhilarating experience, and I knew right away that we had to keep doing it.

At the time we weren’t connected at all with the local fringe theater scene; I don’t even think we knew there was a fringe theater scene. So for the first couple of years were were sort of working in this bubble, pretty much just doing theater for ourselves as a way to remain creatively engaged, picking up like-minded folks along the way. At some point we looked at what we were doing and realized that we had accidentally started a theater company.

You wear many hats for Flat Earth (directing, producing. graphic-designing, etc.) . Do you have a favorite role to play?
I don’t think I really have a favorite role, per se. It’s more about figuring out what’s the best thing for me to be doing on any given production. Having said that, there’s nothing that quite matches the exhilaration and satisfaction of directing a show and watching it come together. It can be frustrating along the way, such as when you’re trying to solve some issue with the blocking, or some moment just isn’t playing the way you want it to. And you’ll be sitting there, pulling your hair out, feeling like all is lost when suddenly there will be some epiphany, some solution to the problem.

Those are the moments that artists live for, I think: that instant of perfect clarity when the impossible becomes possible.

At the risk of sounding like a broken record, Terra Nova blew me away. Can you tell me how Flat Earth came to stage this show?
I’m so glad you liked Terra Nova! Flat Earth has a very democratic way of choosing seasons. Every year, a group of us reads a couple dozen scripts over the course of a few months. Collaboratively, we condense our list down to a handful of scripts that we all like and feel would be a good fit for our season. It’s at this point that we solicit proposals from directors. In the end, we try and craft a season that has a somewhat cohesive theme, but often that’s just by chance.

For the 2015 season we were very fortunate to have a number of really outstanding scripts that also happened to play really nicely together. When we looked at our short list and it included Terra Nova, Farnsworth, and Radium Girls it was really a no-brainer what our season would be.

There are many stories that talk about man’s arrogant attempts to duel with nature. What makes Terra Nova stand out from other narratives?
There’s a tendency in historical nonfiction to romanticize tragic heroes as these larger-than-life figures. I think that’s how Scott, especially, has mostly been immortalized in the popular consciousness; he’s not a man, he’s a bronze statue. Terra Nova, more so that other works in its genre, succeeds in peeling back the veneer of heroism to reveal the flawed man beneath. In reality, this isn’t a story about man versus nature, it’s a story about man versus himself.

It was not the weather that doomed the expedition, it was Scott’s arrogance and folly: His pig-headed insistence that things be done in a proper, “sporting” way; his blind belief in British superiority; and his confidence in himself as a leader. It’s very easy to paint Scott as a hero who died in the honorable pursuit of scientific discovery, but the reality is far more nuanced than that. Robert Scott was his own worst enemy, and I think Tally does a fantastic job of presenting him as such.

You take stunning photographs. What parallels (if any) do you draw between capturing moments in photos with capturing them live onstage?
Thank you! I think my approach as a director is informed by the process of photography. In a way, both art forms depend on factors outside of your direct control, and in both cases the key is in manipulating the factors you can control.

With photography you can control things like focal length, lighting conditions, and framing, but you don’t necessarily have control over your subject. The trick is to set things up in a way that are favorable to creating the image you want. Once you release the shutter, all bets are off and you just have to hope that the choices you made pan out.

As a director, you can’t control every aspect of what appears on stage, but with good planning and a talented team of collaborators, you can have reasonable confidence that your vision will come across. Like photography, the key is in knowing what variables you can–and should–manipulate in order to get there.

What’s next for Jake Scaltreto?
While I don’t have any directing gigs lined up, I will be producing Flat Earth’s fall production of The Sound of Cracking Bones. Until then, I’ll just be finding ways to stay busy and creative.