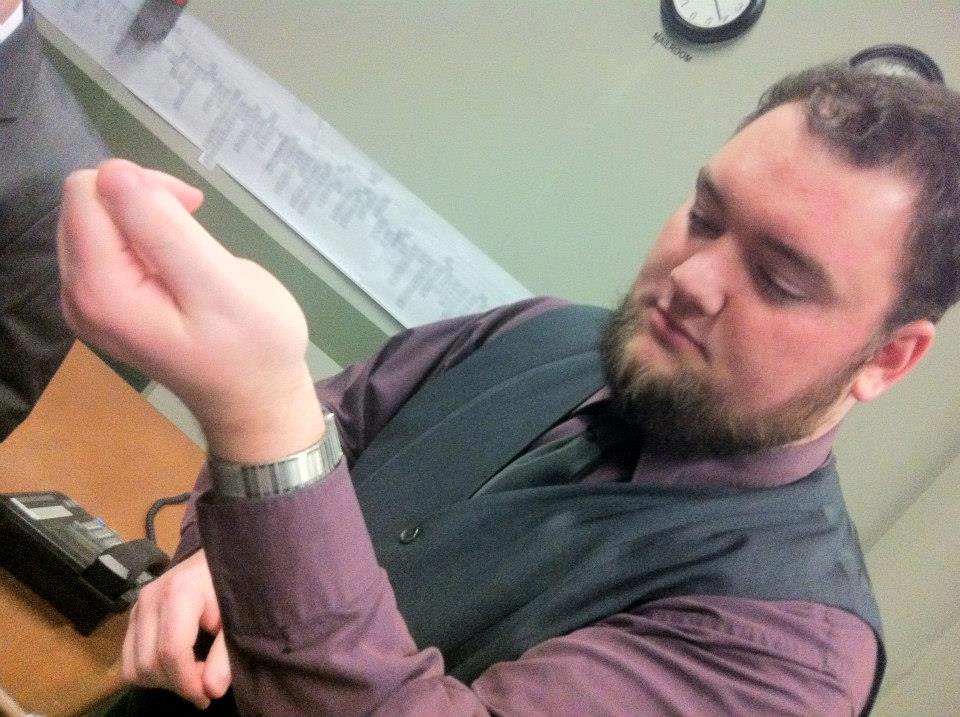 Chris Chiampa is nominated for Best Actor for his role as Captain Robert Falcon Scott in Flat Earth Theatre’s Terra Nova. The English Royal Navy Officer led a doomed expedition to the South Pole. We discussed playing historical characters (and how some character research can prove unhelpful), helpful directing tactics, and the importance of theatre companies taking chances.

What drew you to work in the theatre?
I’ve been doing theater since I was a kid, so I’m rather afraid I don’t remember anymore what drew me to it in the first place. The Charlestown Working Theater was offering acting courses for children; I can’t remember whether it was my idea to do it or my parents having me try it out since I’d already proven myself a desperate failure at athletics. So it’s just always kind of been around.

I’ve dipped in and out over the years. Acted in various CWT children’s productions through elementary to early high school years, dabbled a LITTLE bit in improv in high school, then didn’t do any theater of any sort again until college. After college I did a single show and then nothing for a while. So something keeps bringing me back at least, even if I don’t remember the initial impetus. At the end of the day, it’s a way to siphon off excess energy and stave off existential boredom, while also getting to be an entertainer. The latter’s probably the most important to me.

The first production I saw you perform in was in Flat Earth Theatre’s The Pillowman, a very dark, very funny, and much-loved modern play. Why did you audition for that show? What was it like playing Michal?
I’d been back at acting a little under a year, having appeared in a couple of productions with The Post Meridian Radio Players, a Somerville-based group that does radio show-style performances. But there’s no line memorization or blocking there, and I wasn’t necessarily planning on getting into fully staged productions again. I’d also had a few appearances in a part-improvised-part-scripted comedy show called Fishnet Networks.Net, which had a rotating cast playing various parts and, again, not a big demand mentally, due to the characters I played not having many written-in-stone lines. I’d known the director of The Pillowman, Sarah Gazdowicz, since college. Juliet Bowler, who ended up playing Tupolski in Pillowman, had been the director of Fishnet by the point in its run where I joined. Now, which of them suggested I give it a go, I can no longer tell you, but I’m largely certain it was one of them. I can’t claim to have been familiar with the material; as far as actors go, I’m horrifically unfamiliar with plays if I’ve not seen or been in them. And it wasn’t until the show premiered and I saw the program for The Pillowman that I realized “Oh, this is by the In Bruges guy.”

Almost four years on now, the main thing I remember about playing Michal was feeling utterly terrified. It was my first go in fringe theater, and I was having a hard time shaking the feeling that at any minute the powers that be would realize they’d made a terrible mistake and replace me. But my castmates were amazing, treating me as a peer as opposed to the incompetent trainee I felt like. And Sarah is an amazing director, which helped immensely. Michal is incredibly complex, and the one thing I remember in particular is Sarah having me play him in rehearsal by emphasizing one specific aspect of his character throughout so I would remember that, however he is behaving from moment to moment, all these variations of him were in his head.

Terra Nova was a marvelous production, and your role as Captain Robert Falcon Scott earned you our nomination for Best Actor. How did you prepare for this role?
Step one ended up being to avoid as much information about the historic Scott as possible. When I got the role I began to read a little bit on him, but the real man was quickly shown to be too incompetent for words, so I stopped. I saw the Scott on the page as well-meaning but misguided, perhaps somewhat desperate, and therefore at least kind of sympathetic. Having since learned more about the real Scott, it would have been incredibly difficult to do that. The real man just about epitomized turn-of-the-20th-century imperial hubris, and if I’d known all that going in, it might have been hard to make him the man I saw on the page.

After that it was bringing out the aspects of the character that I felt would make the audience sympathize with him the way I did. Because one could, despite how he is written, twist the way he is presented to make him a more antagonistic figure: drown out the self-doubt by upping the blowhard; play his decision to return to the Antarctic less agonized and be more argumentative than pleading with Kathleen, his wife, during that scene; keep his men at a distance willfully as opposed to, as I tried to play him, from not really understanding how to deal with people. I also kept David Tomlinson in the back of my mind for the scenes where he showed a braver face; anyone who knows me has been bored to tears hearing me extol the virtues of Mary Poppins, and his performance as Mister Banks seemed an excellent reference point for a stiff-but-well-meaning and slightly socially-inept Edwardian gentleman.

The audience watches helplessly as Scott guides his men to their death at the frozen bottom of the Earth. Do you agree with Amundsen’s characterization of Scott as “the most dangerous kind of decent man”?
I’d say so. There was a lot of joking in the rehearsal process about how the Scott of the play does genuinely seem to think that “good old-fashioned British gumption” would see him and his men through. Because he’s exploring a part of the world devoid of other people, you can tell his story without having to gloss over, attempt to justify/apologize for, or otherwise just ignore the uncomfortable connection to colonial imperialism that is inevitable when talking about his peers who went to populated areas. It is the “Because it’s THERE” mentality in its purest form, and I think, on some level, that’s something a lot of folks can naturally root for. But he also has this desperate need to prove himself due to his earlier failures, and this desperation is ultimately what drives his poorer decisions. But this, again, is something I think audiences can identify with. He, unlike most of us, just found himself facing a much larger and more dangerous task to overcome to try and rectify the situation, so these poor decisions have much larger consequences than most of us would ever realistically have to face. And that belief—that if he just played by the rules as he understood them, they would win the day—was a big part of his undoing.

You’ve performed in several Flat Earth shows, and been house manager for a number of productions as well. What do you hope for the future of this theatre company?
Mostly that they keep doing what they’ve been at for some time now. They put on, I think, excellent and quite interesting shows, and they take chances. At the time of writing, they’re running the East Coast premiere of Tales of a Fourth Grade Lesbo, and were previously the New England premier of What Once They Felt. Last year they mounted Radium Girls with an all-female cast. I was in their Pygmalion in 2014, and even something as staid as that show was presented in an entirely unique way. I hope they keep it up.

What’s next for Chris Chiampa?
This May will see a staged reading of my first, full-length play, With a New Song’s Measure. It’s based off the King Arthur legend and will feature, among many others, my Terra Nova castmates James Hayward and Kevin Kordis. Then this summer I’ll be making my fifth appearance as Doctor Watson in the Post Meridian Radio Player’s summer mystery show.