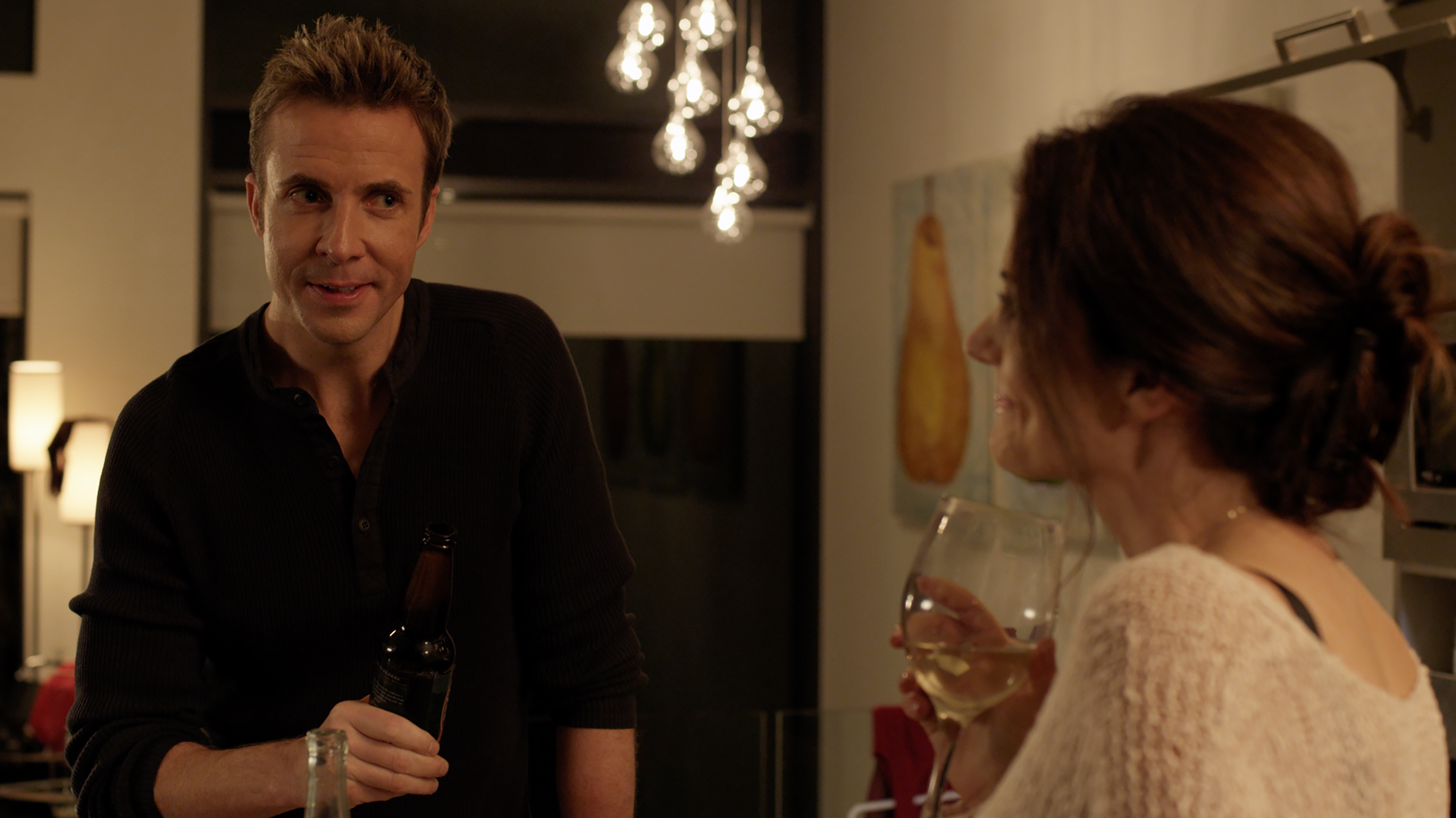 When you sit down to watch What an Idiot (currently playing at the Kingsway Theatre in Toronto), make sure you commit. Five minutes into this Canadian comedy (that annoyingly pretends to be American), I wanted to turn it off. Tired “women never like nice guys” tropes, humourless fat jokes and a band of the most archetypical bros imaginable convinced me this film had nothing to add to any conversation. But I stuck with it anyway and, as the film moves on from setup and into its actual story, it gets infinitely better.

Average nice-guy divorcee Nick (writer/director Peter Benson) falls fast and superficially for his hot (and cold) new boss Jackie (Julia Benson). When she immediately rebuffs him, he uses the information that he gleaned from stalking her with his buddies to change the narrative- she only hangs out with gay dudes, so her tells her he’s gay. It’s a dumb, predictable concept but it’s not completely devoid of insight, a saving grace I’m going to credit to the female Benson who co-wrote the story and is definitely more qualified than her husband when it comes to demystifying the plight of the outrageously attractive female. Jackie’s complete unwillingness to let a straight man into her bubble speaks intriguingly to the self-defensive world view of someone whom men relentlessly pursue (mostly for the wrong reasons). Once Nick forces himself out of suitor mode, he becomes instantly 20 times more charming and Jackie’s defences come way down, allowing the onscreen chemistry between the offscreen married couple to really shine. It speaks to an infuriating phenomenon in the dating game- there’s too much of a difference between how we talk to potential mates and how we talk to someone we see as just a fellow human being. Silly and “idiotic” as Nick’s scheme is, it gets rid of the game and lets two human beings connect.

In a very reassuring move, the film manages to present its slightly problematic gay jokes without falling into the biggest stereotypical traps. Despite how much I hated those first ten minutes or so (which really set the film up to be so much worse than it is), I knew What an Idiot would be alright when Nick and his bros ask their friend Geoffrey to “make him gay” and he responds not with an elaborate makeover montage but with a basic “be yourself” that frees Benson from the “playing gay” horror I’d been anticipating.

The dialogue is at times trite, the friends and co-workers are in desperate need of either development or deletion, and every turn is predictable, but What an Idiot is built on a base of strong chemistry and, somewhere in there, it says something that needed to be said.