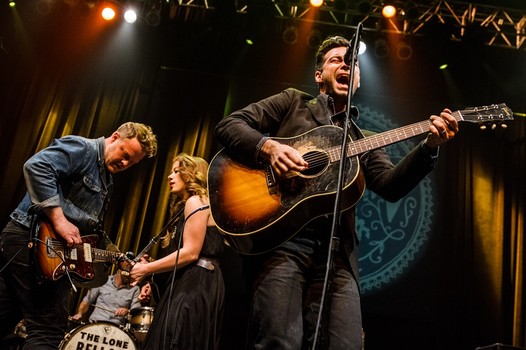 The Lone Bellow at Boston’s House of Blues

I recently had the extreme pleasure of seeing The Lone Bellow at Boston’s House of Blues, and I can’t have asked for a better way to spend a Wednesday night.

The first opener of the show was Hugh Masterson, a singer-songwriter out of my very own Nashville, TN. He said at the beginning of his set that he typically performs with a band instead of solo, and it was pretty clear that he needed the band. He was solidly OK as a solo act – nice voice but nothing special, lyrics and melodies that were decent but unmemorable – but when the performers from the second opener Anderson East joined in, things actually got interesting. The whole-ensemble songs featured driving bluesy bass lines and a full-bodied sound that kept my attention, something the solo numbers had failed to do. By the end of his set, I had come to the conclusion that Hugh Masterson was so-so on his own but worth listening to when he has some backup.

Anderson East was next in the lineup. Their sound when backing up Hugh Masterson could not be more different than what they came out with in their own set. The music was a delightful mashup of gospel, Motown, big-band, and good old-fashioned rock-and-roll. Mr. Anderson East himself fronted the band as the lead singer, with the raspy drawl of Ray LaMontagne and the gyrating hips of Elvis Presley. As opening acts go, this was one of the best I’ve seen. Whether they were playing covers of old favorites or tracks from their new album Delilah, they had the whole crowd dancing. This is definitely a group I’m adding to my “favorites” list.

And then, finally, the act we all were waiting for: The Lone Bellow. They were worth the wait. From the very beginning, the entire band performed with an energy that infected the entire space. The lead singer Zach Williams belted the words until I thought his voicebox would burst. For some reason it never occurred to me that the guitarist Brian Elmquist sang some of the songs I had heard on their newest album Then Came the Morning, so it was a pleasant surprise when he took over the mic for “Watch Over Us.” They were joined for one song by the slide guitarist from Anderson East, a long-haired bearded fellow they called “The Reverend,” presumably for his sermon-like monologue on the power of good music to cure “rheumatism and athlete’s foot.” My favorite parts of the set were the songs where Williams, Elmquist, and mandolin-player Kanene Pipkin gathered around an ambient microphone, joining their voices together in a unified wash of harmony and gentle mandolin accompaniment. Other times, Williams leapt into the buffer zone between the crowd and the stage, high-fiving audience members and spraying sweat everywhere. The set ended with the album’s title track “Then Came the Morning,” featuring the most successful example of audience participation I’ve ever seen. In the past when I’ve been at concerts where the band tries to get the audience involved, it almost invariably falls a little flat. But here, the whole crowd joined in a two-part harmony that felt almost spiritual.

If this show is still touring near you, I highly recommend it. The Lone Bellow played a fantastic set, and their openers weren’t half bad either. All in all, an excellent musical experience.