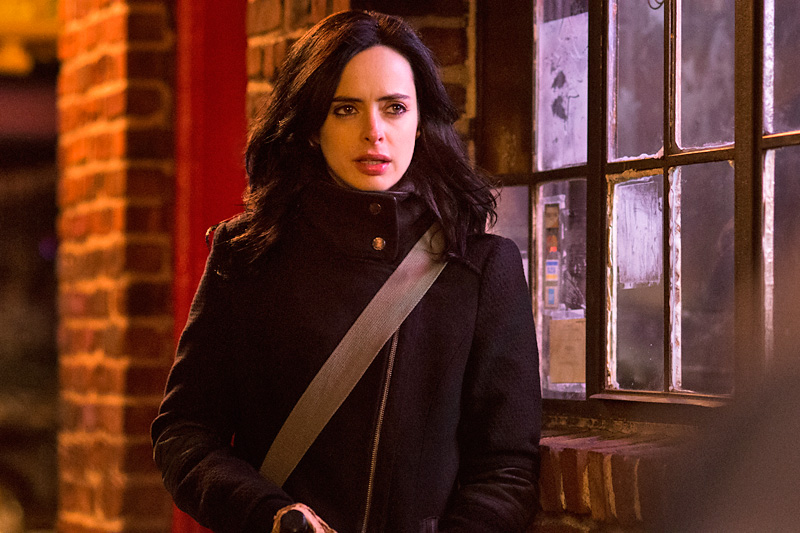 Finally, finally, after months of waiting, Jessica Jones is here. Since the first stills of Krysten Ritter in character as Jessica were released, I was ready for this show, and the first episode not disappoint. In a world with a lot of superhero TV shows already airing, and more planned, Jessica Jones has no trouble distinguishing itself and carving (or punching out) its own niche within the genre.

One of the things that makes Jessica Jones stand out (for a show about a superhero) is how it’s focused on Jessica and her story. Most superhero shows are focused on the bigger picture. Whether the hero in question is driven by innate goodness, by a desire for redemption, or something in between, they use their powers to protect their planet, or city, or even their neighborhood. Jessica isn’t driven by any such forces. She just wants to get by, and uses her powers to aid her PI business. That’s not a criticism of Jessica. She is under no obligation to use her powers (which at this point mostly seems to be super strength) for anything. Not to mention, she has her own problems, like PTSD, and trying to earn enough money to make a living. Instead of seeing a fresh-faced hero rising up and embracing something new, we see a woman who’s been there, done that, and has been burned for it. The big question of the episode is: will Jessica run away, or will she do something about it?

“It” is the reappearance of the sinister Kilgrave (David Tennant), who only appears in flashes. Kilgrave is an expert at Jedi mind tricks – he can make people want to do things they wouldn’t ordinarily want to do. He made Jessica do some things which still haunt her. We might now know the specifics, but if they can shake Jessica, who even after just one episode has shown herself to be pretty tough, they must have been pretty horrific.

While episode one was all about Jessica, the supporting cast showed a lot of promise. In addition to Kilgrave, Luke Cage (Mike Colter) made an impression. Which is good, since he’s getting his own Netflix series too. Rachael Taylor was good in the few scenes she was actually in, as an old friend of Jessica’s. And Carrie-Anne Moss’s Jeri Hogarth was intriguing. It’s not clear yet if Hogarth will be an ally or antagonist (maybe both?), but it was fun to see her dynamic with Jessica.

My one gripe with the episode was the somewhat excessive voiceover narration. I kind of get it- it’s a show about a PI, and voiceovers are a classic staple in detective films. But it’s a tool that needs to be used carefully. As the episode moved on, and Jessica’s voiceovers were used less, they were fine. Ritter is a talented actress and doesn’t need these voiceovers to communicate. When used sparingly, they’re an asset, but when used too much, like in the first five minutes, they end up detracting from her performance.

‘AKA Ladies Night’ set up a flawed and fascinating main character, an interesting supporting cast, and a gritty, but realistic world. I would write more about its dry humor, fast pace, and the thoughtful way it handles victims of psychological trauma, but I have to go binge the rest of this show.