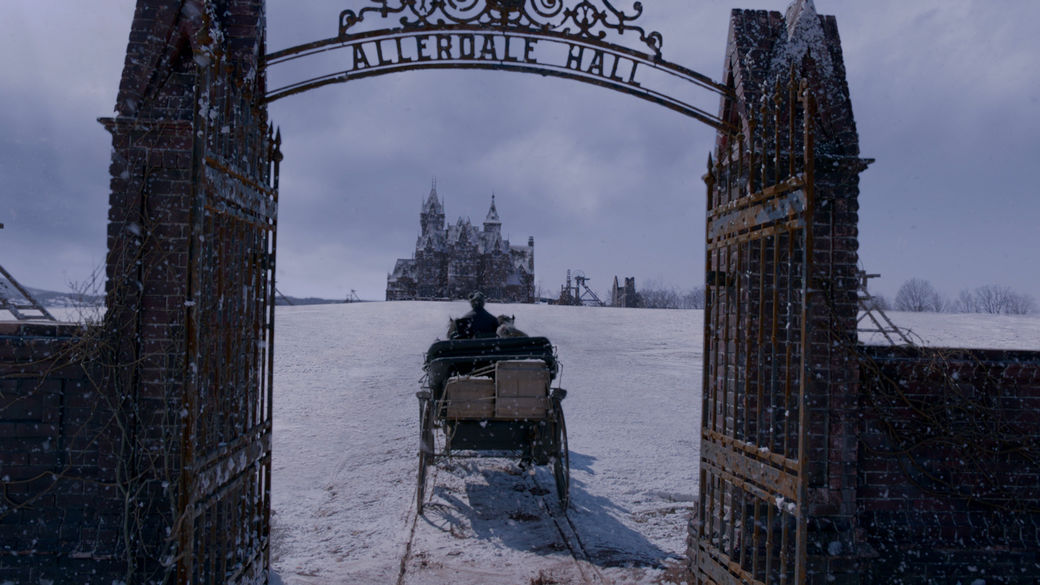 Crimson Peak was very pretty. Beautiful, even. And if all you required from your film-going experience is that a movie be aesthetically pleasing, you’ll probably enjoy Guillermo del Torro’s Crimson Peak. But if you start digging past appearances, you’ll be disappointed with a thin plot and shallow characters.

The film follows Edith Cushing (Mia Wasikowska) through her courtship with Sir Thomas Sharpe (Tom Hiddleston). After a whirlwind romance, she move to England to live with him, and her new sister-in-law, Lucille (Jessica Chastain). It soon becomes clear there’s something wrong with the Sharpe siblings, and their ancestral home, Allerdale Hall (nicknamed Crimson Peak). Edith encounters terrifying ghosts around the house, while becoming more and more suspicious of the Sharpes.

Del Torro was very clear when promoting his film that Crimson Peak isn’t a horror movie, it’s a gothic romance with ghosts in it. (It doesn’t seem like the marketing team was quite on the same page, with the film’s few scares being played up a lot in advertising material.) And this is true- it wasn’t a horror movie. There were a few genuinely creepy moments, but overall, it wasn’t scary. The ghosts were there to advance the plot.

Unfortunately, the plot just wasn’t very interesting. It certainly featured some conventions of the genre: an innocent young woman, seduced by an older man who clearly has a dark secret. Heightened emotions. Madness. Obsession. Good and evil pitted against each other with little moral gray area. These elements have been featured in some of the great films of classic cinema. They just weren’t utilized very well in Crimson Peak. The Sharpe siblings’ secret was pretty obvious. There were no unexpected twists. A lot of the film involved waiting for Edith to catch up with the audience. Rather than anticipation, the emotion this created was exasperation. Once Edith (finally) solved the mystery, then the action picked up, and it was a little more interesting. But not much. Without giving anything away, the film ended how anyone familiar with genre conventions would expect it to end.

In this genre of film, atmosphere and emotions are two crucial elements. Crimson Peak has atmosphere down. (More on that in a bit). Emotions? Well, they certainly are there, and they certainly are powerful. But are they sincere? Are they believable? Not always, and a lot of that stems back to the shaky plot.

Sometimes it’s okay if a movie plot isn’t doesn’t reinvent the wheel. There’s a popular theory that there are only seven basic plots in the world. That’s up for debate, but it’s true that most film genres or subgenres have certain patterns they follow. The degree to which they deviate from said pattern varies, but a lot of successful films follow their genre’s conventions pretty closely. Sometimes it’s nice to go into a movie of a certain genre having a good idea of what to expect. Personally, as long as I can get invested in at least one character’s arc, it’s fine that the plot isn’t constantly twisting and turning. If there’s at least that one character I’m following, I’m so focused on them, I barely notice the film hitting familiar beats – I’m too busy focusing on individual parts, that it’s only later when I reflect on the film as a whole that I see the overall pattern.

Crimson Peak didn’t have that one character. Which was especially disappointing, since del Torro promised interesting female characters at the Comic Con panel. (He also promised there would be twists to the traditional Gothic romance….) I applaud del Torro’s intentions but not his execution in this instance. He’s capable of creating female characters that are far more interesting than Edith or Lucille. Edith is a sheltered young woman with a very active imagination. She’s a writer, and she’s curious. She pokes around the house and starts piecing things together. At the same time, the ghosts are helping a lot. Towards the finale, one of the ghosts literally pointed her in the right direction. A lot of Edith’s heroic acts are less because of her own initiative and more because another person (or ghostly entity) was there to help her (or chase her) in the right direction. Wasikowska played her part wonderfully. But her part isn’t as groundbreaking as was promised. She’s a damsel as much as she is a heroine. Does she grow into a stronger character by the end? Sure, but so do a lot of other heroines of Gothic Romance – Edith isn’t a new or innovative character.

Edith was the heroine, and Lucille was the villain, and she was almost cartoonish in her villainy. There was nothing subtle or nuanced about her. I get that gothic romances deal with archetypes, so extreme characterizations are to be expected, but there is a limit. If Lucille was a man, she would probably have a mustache she would twirl. Thomas fared a little better, but only a little. He didn’t feel as over the top as Lucille, but to be fair, Thomas had a bit more internal conflict going on that added some depth for Hiddleston to work with. It doesn’t hurt that Hiddleston has charming, dangerous guy down to almost a science by this point. Still, this is far from Hiddleston’s most challenging or rewarding role.

Perhaps del Torro was hoping the production design would distract from the bland characters and wispy plot. The production design was pretty amazing. The costumes, especially Edith’s were gorgeous. And the set was amazing. Crimson Peak was beautifully designed with immense detail. It was a grand house, whose best days were behind it. A slowly decaying masterpiece, the house was like a character on its own. It’s just a shame the house was the most interesting character in the film.

Crimson Peak was made with good intentions. It was del Torro’s attempt to revive a genre he loves, and to create some interesting female characters. It’s too bad Crimson Peak succeeded in neither of those areas. It’s actually somewhat baffling how a brilliant director’s passion project, brought to life by a talented cast ended up falling so flat. It didn’t bring a new angle to the gothic romantic genre, it was more like a love letter to the classics that inspired it. Unfortunately, it just never captures the tension or intensity of the films it aspires to; Crimson Peak is beautiful, but ultimately hollow.