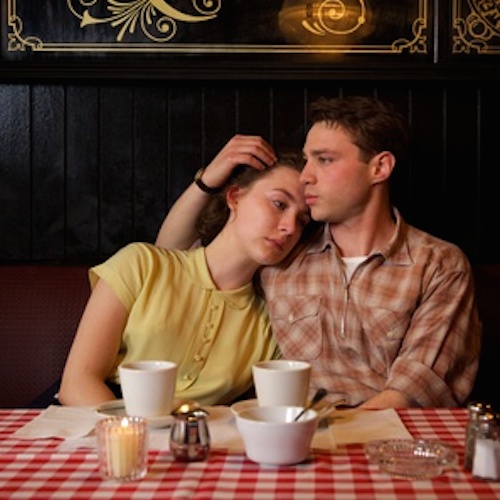 Objectively, Brooklyn is a good movie. It was beautifully filmed, wonderfully acted, sentimental, without being overly so. It’s a shame the main character’s poor decision making in the last third of the movie makes it hard to enjoy.

Brooklyn is an adaptation of a book. It tells the story of Eilis Lacey, a young woman who moves from Ireland to – you guessed it- Brooklyn, New York, in the 1950s. She leaves her family behind, and has to learn to adjust to her new life. She gets a job, goes to school, and falls in love. Just when it seems like Eilis can be happy in Brooklyn, tragedy strikes in Ireland, and she has to go home for a funeral. Once home, she realizes how much she misses Ireland. And she falls in love with a new guy.

The film is blessed with an amazing cast. It stars the wonderful Saoirse Ronan as Eilis Lacey. Ronan is a gifted young actress, and she rises the challenge of carrying the film. While there is a fabulous supporting cast, she’s clearly the star. The director is fond of using close up shots of Ronan, silently communicating to the audience. It’s impressive how much she is able to say without actually saying anything.

She is helped out by the likes of the always reliable Jim Broadbent and Julie Walters. Walters was especially good in her role as the owner of Eilis’s boarding house. Eilis’s fellow boarders provided some comedic relief to the film as well.

There were two leading men in this film: Emory Cohen as Tony, Eilis’s Brooklyn beau, and Domhnall Gleeson as Jim Farrell, her Irish crush. Tony and Jim were almost too perfect – in completely different ways, of course. They were attentive, sweet and madly in love with Eilis, and didn’t seem to have any flaws. Cohen and Gleeson’s main direction seems to have been “charm the crap out of everyone”. And they did. Well done, gents. It would have been nice if they had a bit more personality and weren’t just New York Dream Boyfriend and Irish Dream Boyfriend. Cohen was especially winning as Tony, and I’m curious to see what projects he does next. I’ve been a fan of Domhnall Gleeson for a while* and enjoyed his performance, even if I wish he had more to work with.

Unfortunately, as soon as Gleeson showed up, I started to hate this movie. This has nothing to do with Gleeson, and everything to do with Ronan’s character. Up until this point, the movie was great, if a little slow at times. Eilis’s struggle to adjust to Brooklyn and plant roots despite homesickness was a really interesting story, and an important one. But when she went home, the problems start.

When she left Brooklyn, Eilis was in a serious relationship with Tony. She returned home for a funeral, and didn’t tell anyone about him. Understandable. Who goes home for a family member’s funeral then goes, “by the way, lemme tell you about my new boyfriend”? What’s less understandable is that Eilis allows Jim to start courting her. She starts to settle into a lifestyle back in Ireland and imagines what her life could be like. It’s like she’s trying on a new (or old) lifestyle for a while.

The allure of home, of family, of returning to your roots is also understandable. But does Eilis write to Tony and say anything? No, she writes back to him once, and when he writes to her, his letters get put, unopened in a drawer. (The guy behind me at the screening said it best when he gasped, “Giiiirl”.)

At this point, I really had no sympathy for Eilis because she dug herself into this hole. I understand Tony and Jim aren’t just Tony and Jim, they’re symbols of her new life and the one she left behind. But I still struggle to care. It might be easier to sympathize if Eilis knew Jim before she left Ireland, and maybe they liked each other, or there was some kind of spark, but the timing never worked out, etc, etc and upon her return those “what ifs” are starting to resurface. It would also have made sense from the new life vs old life dilemma she faces if they had some kind of history.

But no. Her friend had to force Eilis and Jim to hang out. She didn’t even like him at first. Eventually, Eilis realizes she is starting to have feelings for Jim. She does nothing to discourage her feelings from developing, or to discourage Jim. Here’s a hint, Eilis: if you have a boyfriend, maybe don’t let a stranger become so close to you that he has good reason to think things are serious. Just a general suggestion. If he wants you to meet his parents, you’re in too deep.  ** (Go to the bottom of the review for a spoiler-filled rant).

Up until Eilis’s dilemma, I enjoyed Brooklyn immensely. And even when Eilis started to annoy me, the film continued to have beautiful location shots, and period details. Ronan was still amazing- it’s not her fault her character was making terrible decisions. I might not agree with what she was thinking, but I understood exactly what was going through her head, thanks to Ronan’s nuanced performance.

Brooklyn was a well made, and well-acted film. I wanted to like it. I wanted to appreciate the bigger picture, the immigrant’s struggle of an adopted home vs the place they grew up. Maybe other people will find the love-triangle less ridiculous, or maybe they’ll be able to focus on the larger metaphor and beautiful performances. If you’re one of those people, good on you, you’re going to be able to enjoy a well-executed film. But for me, it was hard to enjoy the movie when I kept whispering at the screen, “Make better choices.”

*I don’t think Brooklyn is the film that’s going to push Domhnall Gleeson into more mainstream recognition, which is fine, since he’s going to be in a little indie film called The Force Awakens later this year.

** Tony wasn’t just Eilis’s boyfriend. They got married before she went back home. What exactly was her plan? Ignore him until gives up or dies? I can deal with selfishness, I can deal with stupidity, but not this level of both in the same character. Eilis is legally married to someone else, and literally her plan is “pretend that didn’t happen and try out this Irish lifestyle”. She’s getting her family and friends’ hopes up that she’ll stay, she gives Bill Weasley Jim good reason to think she might stay and marry him, while poor Tony is back home, worrying the reason his wife isn’t writing back is because his letters don’t sound intelligent enough.

The end of the movie tried to make it seem like Eilis had grown so much, but the only reason she finally made a decision was a busybody neighbor found out about Tony, and called Eilis out on her charade. That’s not maturity or growth, that’s someone forcing Eilis’s hand. Tony liked it, he put a ring on it, and Eilis needs to deal with the consequences of her decisions. It’s not just her life she’s affecting with her indecisiveness and refusal to communicate. I get that she’s been through a lot, but that’s not an excuse for her to put her loved ones through an unnecessary emotional roller coaster.