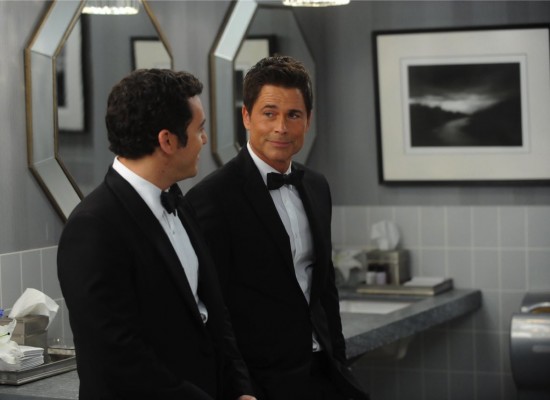 I still have high hopes for The Grinder but I found episodes two through four to be disappointing after the premiere. I still think Rob Lowe is killing it, but I was hoping the other characters would be more fleshed out at this point and I am getting a little tired of the constant comparisons to Dean’s TV show and his dramatic TV show-esque lines. Yes, I get that that’s what this show is about, but it doesn’t have be constant.

So what’s been going on with the Sandersons and co since the premiere? Well, we’ve met Todd, a bumbling attorney at Stewart and Dean Sr., and now Dean Jr.’s law firm. He was accidentally the mole in the law firm and Stewart and Dean like to use him in their battle against each other. Right now, he’s scared that Claire’s taking over his role.

Claire joined the law firm recently. She used to work for their rivals before switching over. She does not like Dean’s show and Dean, naturally, is obsessed with her. Since everything’s a TV show in Dean’s mind, he’s convinced that she’s his new love interest. I really hope that they shake things up and never actually have Dean and Claire get together. But we’ll have to see. I could see Dean trying to change his ways and winning her over instead.

Meanwhile, Dean is still a constant thorn in Stewart’s side and they’ll continue to navigate their relationship and realize that they both truly need each other. And I do like their relationship. I like the contrast between them and I think Rob Lowe and Fred Savage work well together. However, it does sometimes feel like they’re just doing the same thing over and over again. Stewart hates that Dean can get away with anything, but in the end he realizes that he needs Dean.

I still have hope for The Grinder. It’s pretty funny and cute and I love Rob Lowe and Fred Savage. It takes a while for new shows to really find their voice and we’re only four episodes in. I just hope that the characters, especially Stewart’s family, are more fleshed out soon.