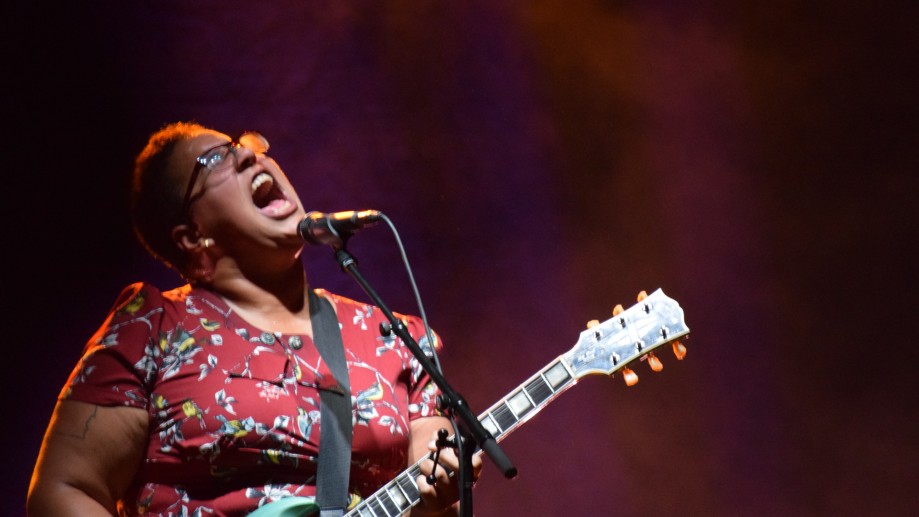 She came, she sang, and oh boy did she conquer. Frontwoman Brittany Howard led Alabama Shakes in a tour-de-force takeover of the recent Boston Calling Music Festival’s closing act. A gorgeous autumn evening with a full moon lunar eclipse perfectly complimented one of the greatest live shows I’ve ever seen in my life (look at me, I’m gushing!). Hozier may have preceded them in the lineup, but Alabama Shakes took us all to church.

I’m new to My Entertainment World, so I feel like I have to put in a disclaimer here: I am not usually this nice. There’s always some criticism I can find to make about the music I hear or the shows I watch. But I have to tell you, this show completely floored me. I haven’t got a single negative thing to say.

If you haven’t yet discovered Alabama Shakes, consider this my introductory gift to you. I want you to stop reading this, pull up Spotify or YouTube or Napster or whatever the kids are using these days, and listen to the band’s first album Boys and Girls. Take your time, I’ll wait.

Even if you’re not a “country” or “blues” or whatever kind of person, you have to admit one thing: that woman can sing.

Howard performs her music as if she’s acting in a play: her facial expressions and just-can’t-contain-myself body movements speak just as clearly as the words she sings. When she cries, “I’m scared the storm gonna take me away!”… you believe she really means it. Howard’s wail reaches right into your soul and makes you forget that any other music even exists. If there was a man on that eclipsed moon, I believe he probably heard Howard’s voice.

But enough about my obvious talent boner for Brittany Howard – let’s talk about the show as a whole. Alabama Shakes was a well-oiled machine churning out bass lines perfectly timed with bluesy guitar riffs and haunting, gospel-inspired harmonies. In a bold gambit, they played their Grammy-nominated hit “Hold On” very early in the set. While this kind of move often signals that the remainder of the set will be all downhill from there, that was certainly not true for Alabama Shakes. They continued to pull out surprises, such as a righteous guitar solo that had every audience member screaming.

My entire subway ride home, all I heard was festival-goers gushing about Alabama Shakes and their truly incredible performance – and I have to say, I agree with every single positive comment I heard. I can’t wait to see these guys again. Before playing the final song of their set, Howard said, “This is not a ‘Goodbye’, this is a ‘See ya after awhile’”. God, I hope so.