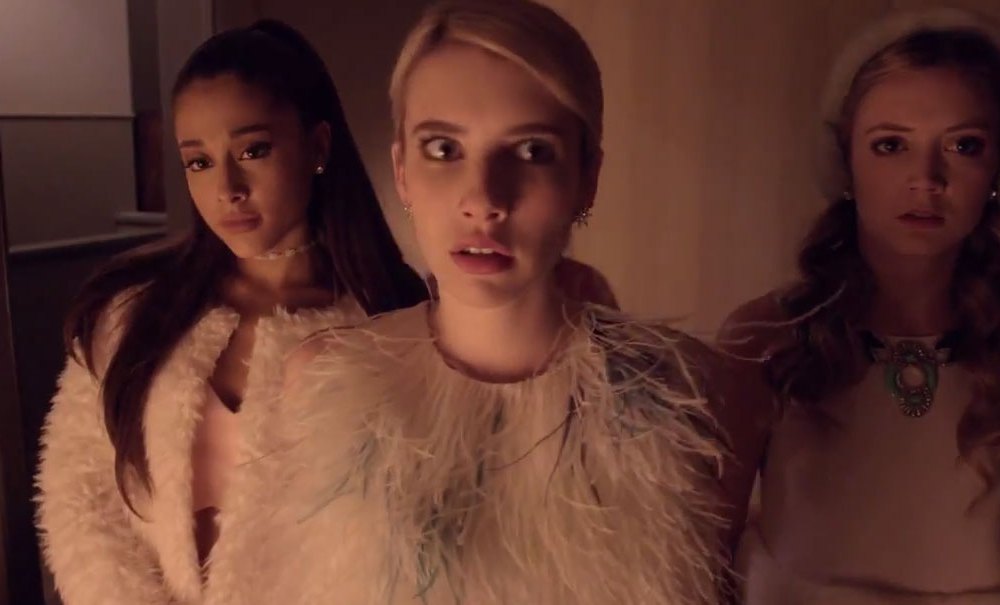 The show starts in 1995 with a young woman giving birth in a tub at a sorority house. When her sisters find her bloody in the tub, they decide to go dance to TLC’s Waterfalls instead of helping her get to the hospital. This was Queen’s first attempt to be clever, and the gag fails miserably.   The mother ends up dying, and the joke is on the writing team for coming up something beyond absurd.

20 years later Grace (Skylar Samuels) is being dropped off by her father Wes Gardner (Oliver Hudson), who on first glance could be seen as the worst helicopter parent, but also seems creepy and Oedipal as the episodes progress. Grace wants to join Kappa Kappa Tau (her mother was part of the organization) which is run by Channel played by the least compelling bitch on wheels Emma Roberts. Roberts seems to want to imitate her alleged terrible behavior in real life in her roles, and she has succeeded in becoming one note caricature. Soon into the show there are numerous deaths, by a killer in a devil costume. The costume is college mascot outfit, which is revealed with pointless happenstance midway through the second episode, an element which is meant to add suspense, but made my roll my eyes for forcing us to thinking another character was a suspect.

As you meet each young woman on the show you never get any development. The writers want to try and provide you with outcasts like Deaf Taylor Swift, which made me chuckle a little, but the creative team never gives you any depth. Queens is trying to imitate Scream, but the problem is this show will never make you care about any of the characters. Even the television series Scream made you care about the characters, but that show had genuine care placed into the story development.

Queens attempts to put together a poorly woven quilt from Murphy, Falchuck, and Brennan past shows and gets every element wrong. This creative team seems to delight in clichés, Boone (Nick Jonas) the gay guy who tries to molest his straight best friend, Zayday (Keke Palmer) the angry Black woman, Cathy Munsch (Jaime Lee Curtis) the bitter feminist.   In Glee this same creative team often seemed to use these identities as exploitation. You can see the same thing with violence toward women in Murphy and Falchuck’s American Horror Story. This team seems to sacrifice the overall messages they try to tout, like routing for the underdogs, at the sake of the underdogs.

You can say that Scream Queens is good old fashioned camp, but the first rule of camp is that you should not try to be camp, it’s like someone calling themselves a hipster, it doesn’t work that way.