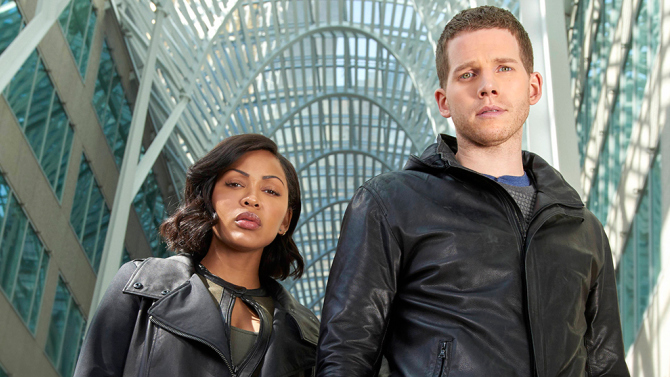 Minority Report needs to calm down. Seriously. The show has an interesting concept behind it, and some incredible world-building. The problem is it’s so eager to impress everyone that it has no chill. It wants to be cool so badly that it forgets the first rule of being cool: you can’t act like you care what people think about you. Minority Report is just a little too enthusiastic in showing off how cool and futuristic it is. Hopefully, it’s just a bad case of pilot-itis, and with subsequent episodes, the show will take it down a notch and focus on the story.

At its core, Minority Report is about two people – Dash and Vega – solving crime. Or rather, preventing crime, if they can manage it. Dash is a Precog- gifted with (limited) psychic abilities. He, his twin brother, and their older sister, Agatha were used by the government for their Precrime Unit – a unit designed to harness the siblings’ psychic abilites to prevent murders from happening. Until Precrime was discontinued, because Tom Cruise pointed out the flaws in the system in the 2002 film. Dash has to integrate himself into the world, but is haunted by visions. So he teams up with Detective Lara Vega to stop the murders from happening.

Solid concept. Police procedural with a twist. It all takes place in the future, which is pretty cool. There was obviously a lot of thought that went into creating the world in the year 2065. It seems like a pretty natural evolution from our current world, technology-wise. (At Comic Con, the creators talked about consulting scientists to imagine how technology would look in 2065). And it’s understandable that after so much work into worldbuilding, the creators are eager to show it off. But again. Take it down a notch.

The futuristic technology speaks for itself, but for good measure, they toss in lines commenting on things like the ‘genetic revolution’ (that makes French fries healthy!), how back in Vega’s mom’s day, they used this thing called Tinder, and how mosquitos are now extinct. It was fun the first few times, but after a while, it got a little wearisome. (Also, how do the mosquitos being extinct impact the ecosystem? Don’t make that a throwaway line- wouldn’t that be a big deal?)

Worse than reminding us that the show is in the future, the show wants to make 100% the audience fully understands the Precogs and Precrime program. Agatha, Dash’s sister has an entire scene where she’s telling Dash why he shouldn’t be working with Vega. She practically recited their entire backstory. Maybe with another character, they could have livened up the dialogue, but Agatha and Dash are both socially awkward (that happens when you spend your adolescence in isolation, witnessing potential murders). The scene, especially Agatha’s parts came across as robotic.

The final scene of the episode proved that Agatha may play a bigger, more interesting part in the story, as she and Arthur (the last of the Precog siblings) discuss visions they both have. In fact, Dash, Agatha, and Arthur all have a lot of potential as characters, both individually, and as a dysfunctional family unit.

I’m not sold on Lara Vega. Vega very enthusiastically supports the Precrime program, and several times over the course of the episode, she lamented that it was shut down. This is a little eyebrow-raising. It’s admittedly been a while since I saw the movie, but I’m pretty sure Precrime ended because Tom Cruise proved that people could defy destiny and make their own choices. Therefore Precrime was a bad thing, because it was locking up potentially innocent people for futures that weren’t set in stone. Not to mention the treatment of the Precogs was pretty horrendous. Naturally, the show has to distinguish itself from the movie, but having a main character so far disagree with the point of the movie doesn’t see the best way to go about it. Not to mention, it makes Vega pretty unlikable. She mentions her father was killed, which is supposed to justify her interest in Precrime. It’s just a little troubling that someone in law enforcement can so easily gloss over the flawed Precrime system and instead glorify it.

There are a few supporting characters, who haven’t been given a whole lot to do. Wilmer Valderrama shows up to be snarky. Then there’s Akeela, the lab technician. Akeela is a Cool Asian. How do we know she’s a Cool Asian, and not a Nerdy Asian? Because she says things like, “Nobody hacks my database”. And like all other Cool Asians she’s funky. She has decorative make-up (or maybe it’s a tattoo?) around one of her eyes, but not the other. She’s asymmetrical like that. At least she didn’t have her hair dyed blue or purple – another quick identifier of the Cool Asian. I’m not sure what Akeela’s role in the show is other than to do vaguely sciency things and be Vega’s sidekick. I’m hoping as the show goes on, she’ll stop being a Cool Asian, and instead be, you know…a character.

That’s kind of where I am with the entire show. I’m hoping as it goes on it finds its footing. This was one of the shows I was most excited about after Comic Con, and maybe I had my expectations too high. The pilot had its work cut out for it. It had the same challenges all pilots face. But it also had to walk the careful line of showing the audience a universe they already saw in the movie, but at the same time showing what made the show different. There’s a lot of potential in Minority Report, and I see glimmers of what excited me so much at Comic Con. But the pilot was trying so hard, it’s a little uncomfortable to watch. It’s sad, because I want the show to be good. It’s still possible at this point. Let’s just hope the show can relax so the audience can enjoy.