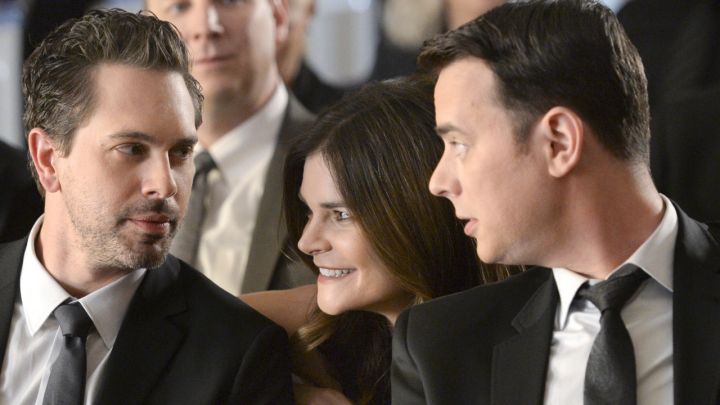 CBS’s new sitcom Life in Pieces is just Modern Family without the diversity. They really really don’t want you to think that, but it’s true. It’s derivative and palatable and simple and sometimes very and sometimes very not funny… just like Modern Family. And, just like Modern Family, it’s about an extended family and their wacky, intersecting adventures. Instead of Modern Family’s mockumentary gimmick, Life in Pieces has its “shorts” gimmick, the idea being that each episode is made up of 4 “shorts” (like short films, but really more like webisodes) starring one or more of the Shorts (yeah, that’s right, the family is called the Shorts).

The four shorts that make up each episode vary in length to the point where, in the pilot, the least funny one was almost as long as the two funniest combined. This creates a sort of ranking system that, thankfully, appears to change every episode. In one episode, the longest segment (which, for the sake of argument, we’ll call the A plot) might belong to the hopelessly unfunny nuclear family (aka the Dunphy-like group) made up of Marie from Breaking Bad (Betsy Brandt), her hapless husband (Dan Bakkedahl, good for one amusing line reading per episode) and three annoying children. The second longest (the B plot) might be the obnoxious parents/grandparents whose relentless wackiness got old so fast I honestly couldn’t believe it. In the pilot, the best storylines (by miles) fell to the C and D slots, clocking in at a mere 4 minutes a piece.

On one hand, the format is quite obviously not much more than a lazy hook and an excuse to not have to integrate the plot elements that make up a standard sitcom, but it does allow the show to have a cast that’s far too good for it- Colin freaking Hanks, the great Zoe Lister-Jones, Thomas Sadoski (aka one of my favourite actors ever); the obnoxious parents are played by Dianne Wiest and James Brolin for crying out loud! The fact that a character might only appear for 4 minutes an episode in a short story with just one or two actors had to have made scheduling far easier and thus made landing great actors more of a possibility. It’s what made Arrested Development season four possible, the fact that they didn’t need all of the big names all at once; it didn’t make it good, but it made it possible.

The major upside here is that the stupid, lazy, convenient gimmick allows the viewer to fastforward (let’s face it, you’re not watching this thing live) through the bad stuff to find the good without missing any storytelling. It’s absolutely not necessary to sit through the “eldest son goes on a college tour” or “Matt caught his parents having sex” antics to get to Colin Hanks and Zoe Lister Jones struggling with being new parents (an actually really well written storyline featuring characters really worth rooting for) or Thomas Sadoski starting at square one with Angelique Cabral (moment of silence for Enlisted); you can skip right to the good stuff and, by the end of the season, have wasted a lot less of your time than if you watch all of Modern Family but really only enjoy the Hayley/Andy storyline (this is my current plight; pity me).

I’m particularly invested in Sadoski and Cabral, to the point where I’m actually committed to watching the two storylines I hate in case Sadoski’s character Matt Shorts (yup, that’s his name) makes a cameo (Brandt, Hanks and Sadoski play the central siblings so they crossover to the other stories fairly frequently but so far none of the crossovers have affected a character’s main story). They’re not doing anything particularly special, just embarking on a relationship that’s tricky (because they work together) at a time in their lives when neither of them feels like anything but a failure (he’s back living at home at the age of 38; she just broke off an engagement to a crazy person played promisingly by Jordan Peele) but both actors are so engaging and their chemistry is so strong that, after about a cumulative 10 minutes of story over two episodes, they’re already one of my favourite couples on TV. Is it possible each of the four stories has their own team of writers? Because there’s a speech in the second episode that is every reason why I love Thomas Sadoski rolled into just a few lines and I’m having trouble believing that the writer of the “Matt caught his parents having sex” storyline is the same person who wrote that speech.

I say this all the time but Life in Pieces is half a good show. Usually when I say something like that I mean that about half of a series’ elements are working well enough that the half that aren’t working at all get dragged along and the effect is passable. But I really mean that Life in Pieces is half a good show. Exactly half of it, meaning two of the four storylines (Hanks/Lister-Jones and Sadoski/Cabral), are really worth watching. The other half is utter crap but, through a stroke of great luck in the form of lazy, gimmicky network pitching, you can do something you can’t do with any other (properly integrated) show on TV and watch two pieces without the others.