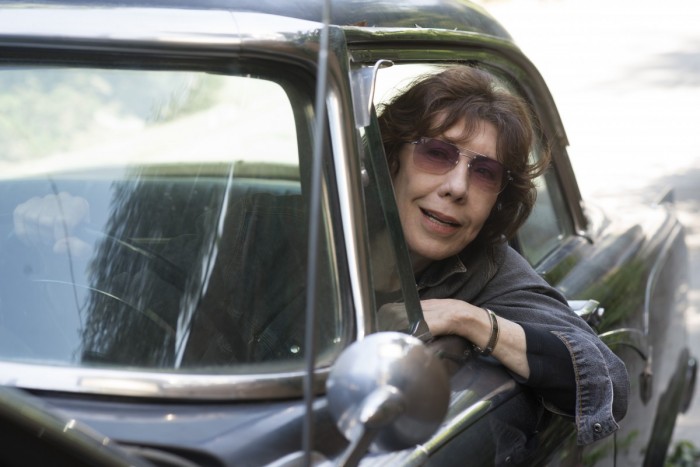 Tomlin was a voice of a generation for female comedians; she was bold and brash and led the charge to be one of the most revered women in comedy. There are many women today who are emulating her style- like Amy Schumer, Tina Fey, and Amy Poehler- but it’s nice to see the real Lily Tomlin again.

The first time I saw Lily Tomlin was in the hilarious 9 to 5. Tomlin’s brand of humor drew me into her web of talent; she was one of those people who made me love comedic films and television above any other genre. Over the years I was able to discover so many layers to this woman’s talent from Rowan & Martin’s Laugh-In to her phenomenal work with Robert Altman. Nashville is by and large my favorite Tomlin performance; she just took my breath away in this role. The same thing happens in Grandma.

Grandma has a simple premise, with some convenient plot details, but the characterization from director Paul Weitz let’s each person open up to develop pockets of a story about life and the choices made.

The film opens with Elle (Tomlin) as she fights with her much younger partner Olivia played by the incandescent Judy Greer. The fight reveals that Elle has lost a partner Vi of over 30 years, and her cantankerous nature centers on this loss, and how her life was made better by her partner. Soon after the fight Elle is visited by her granddaughter Sage (Julia Garner) who has gotten pregnant. Sage wants to get an abortion; she has set up the appointment, but needs the money.

In one of those convenient plot points, Elle has cut up all of her credit cards, and now must drive around with Sage to find the money to help her granddaughter. While the credit card detail may seem silly, it pushes Elle out of her daily routine, and forces her to navigate the loss of Vi, the past, and the connection to her family.

Paul Weitz has had some hits and misses over the years (Admission felt like it was forcing the emotion but About a Boy let the characters, no matter how big or small, delve into the great material). In this story, Weitz creates a beautiful piece of work that allows Tomlin and the entire ensemble contribute to the sentimentality, and the honest nature of Tomlin’s character.

Weitz places The Feminine Mystique into the conversation as well. Elle owns a first edition, and plans to sell it to help Sage pay for her procedure. Sage has no idea what the Friedan book represents but, through this journey, Weitz creates a cross-generational road trip that helps Elle not only connect with her granddaughter, but to bring out Sage’s inner strength she needs to recognize what it means to be a modern woman.

Tomlin’s performance shows the balance of her true feminist perspective. Elle sure has some salty moments, and at times she’s too harsh. Yet through this anger and grief you see the love she has for her granddaughter Sage. If you have read the Feminine Mystique, you understand that through the feminist lens these emotions and reactions come from the same place. Tomlin owns every moment of this character, and is a breath of fresh air in this film.