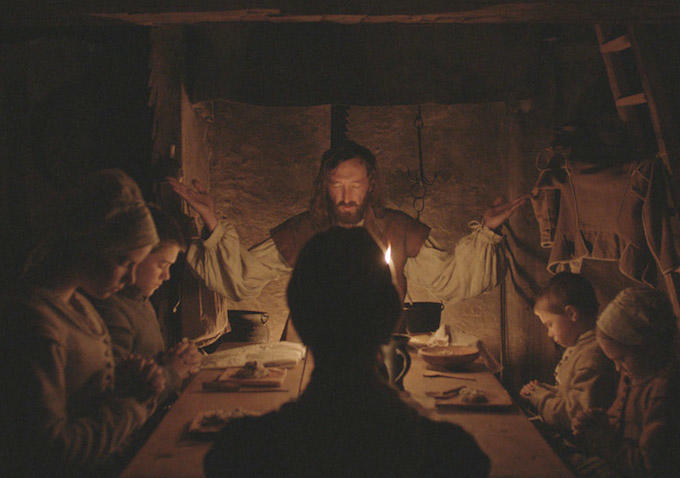 The Witch opens with straight-on, successive shots of adolescent children, staring just off camera, listening to a member of their small Puritan community in 17th century New England banish their father and thus their entire family from its borders. For all its supernatural terrors and shocks, Robert Eggers’ debut feature is driven as much by its young characters attempts to make sense of the repressive strictures of the grown-up world as it is by mystery and fear. Just in time for fall, the movie (playing at the Toronto International Film Festival, though unfortunately not opening wide until January) plants us in the middle of a pleasingly grey New England wilderness, where the family retreats to establish a small farm after being ejected from their town for the father’s “pridefulness”. The mother Katherine (the excellently distressed Kate Dickie, Lysa Tully on Game of Thrones), nurses her infant son and ardently preaches the Christian faith while maintaining the farm. The father William (a magnificently worn-down Ralph Ineson) builds, hunts, and stoically chops piles and piles of wood. The grown-up children Thomasina (Anya Taylor-Joy) and Caleb (Harvey Scrimshaw) work with their parents all day, and the young twins (Lucas Dawson and Ellie Grainger) play with the family goat. And then, before the opening strains of Mark Korven’s strings score have finished playing, tragedy strikes with eerie menace, and we know that there is indeed something in the woods.

Yes, it’s probably a witch, but between the title and an early glimpse of a naked oily woman (Bathsheba Garnett) committing horrific acts, that’s not a secret the movie’s trying to keep. Eggers’ achievement is to cross-stitch the terror of the glancingly seen occult with the gradual dissolution of familial trust. Settler homesickness, isolation and grief spur the family, and particularly Katherine, towards more intense dependance on Christian mercy; deliverance into Heaven or Hell is a chief concern. Puritan faith cradles and torments the family, and trembles in the face of both temptation and the unknown supernatural force that surrounds them, which in these New England woods is both more inexplicable and more tangible than any Christian God. But even religion is presented with an edge of danger: a discussion between father and son about sin is conducted over an open bear trap.

Jarin Blaschke’s cinematography favours greys, blacks, and dark, candle-lit yellows, presenting a calm but austere watchfulness. Along with Louise Ford’s careful editing, this allows Eggers to maintain a growing sense of fear throughout so that although the number of actual shocks are few, almost every scene feels like it could be hi-jacked by something irrational and terrifying. Eggers’ script is defiantly period-specific in its dialogue, and while the “thees” and “thous” occasionally sound a little odd, the actors sell them well, and the formality adds an unforgiving severity to the movie’s fable-like atmosphere. Indeed the movie that The Witch may be most frequently compared to in terms of tone and look is M. Night Shyamalan’s The Village. Both movies feature an evocative November-ish aesthetic in a period New England setting, some awkwardly baroque dialogue, woods which are meant to be off-limits, scary figures in red cloaks, some heavy string music, and a rebellion against Puritanical ideology. Unlike Shyamalan however, Eggers refrains from over-explanation and heavy political commentary, and so the strange and terrifying is allowed to remain just so (apparently the script is based on journals and reports of witch trials and activity from the era, which lends it a Blair Witch creepiness that it doesn’t necessarily need).

Both movies also offer a great spotlight for a young actor who begins the movie as apart of its ensemble before gradually becoming the story’s focal point: in The Village that was Bryce Dallas Howard, and here it’s Taylor-Joy, whose Thomasin goes from being apart of a Night of the Hunter-like duo with Caleb to becoming the movie’s moral compass, guiding us through a wild third act and into an ecstatic and defiant finale. She’s great, along with the rest of the cast, at maintaining an austere and pragmatic surface that hides a whole realm of thought, and the ending asks us to re-examine whether what we’ve just watched is a horror movie or a kind of warped bildungsroman. As those opening close-ups suggest, it’s the children who are most ready to pay close attention to the world and confidently embrace the unknown.