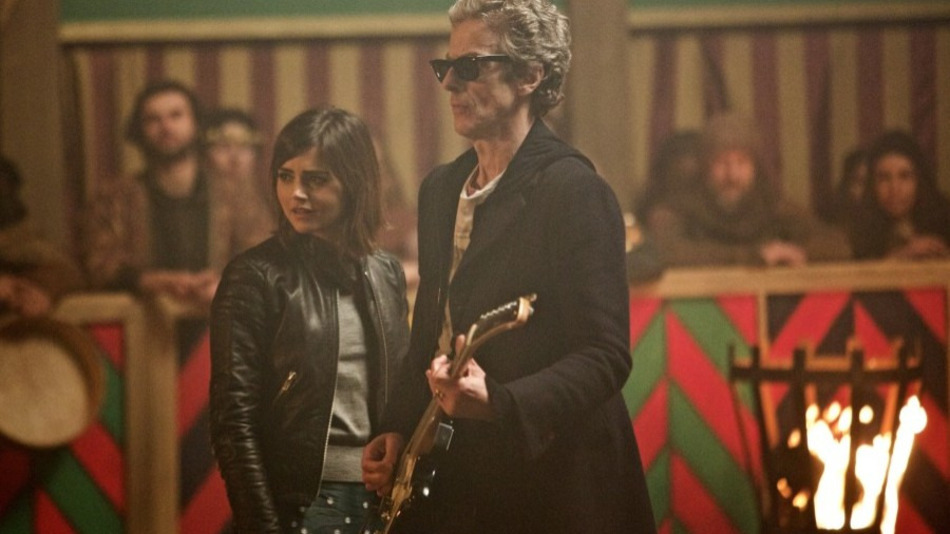 Doctor Who: The Magician’s Apprentice

Here we go again. Another season of Doctor Who, a series that can go anywhere in time and space. Do we go to new places, and meet exciting new people? No. “The Magician’s Apprentice” takes us to Earth, England the oft-tread destination of the Doctor and company, and brings back characters that just will not die. To be fair to the episode, it wasn’t just on Earth. It did include a lot of destinations with a bunch of pointless sequences, but they all ultimately lead to nowhere. (Spoilers ahead).

The episode actually started out really strong, with one of the best openers its had in a while. Featuring a war on some unnamed planet, it had some incredible world-building (like the use of both futuristic technology and a bow and arrow in the same battle). And the hand mines – hands with eyes that popped out of the ground and dragged their victims under – were genuinely creepy. An innocent child was caught in the middle of a field of hand mines, and the Doctor shows up, intent on saving the boy. Until the boy gives his name: Davros. The man who created the Daleks, the Doctor’s most enduring foes.

Then after the theme song, it all went wrong. It felt like the first 2/3s of the episode were build up to the Doctor meeting an adult, dying Davros. First there was a sequence of Colony Sarff, a creepy guy in a cloak travelling across the galaxy looking for the Doctor, to bring him to Davros, but to no avail.

Next up is Clara, in her role as a teacher. In the middle of a lesson, she notices out the window that the planes have been frozen, mid-air. She is immediately called in by UNIT, so she flounces out the classroom to go save the world. In the previous seasons, having companions as part-time travellers while maintaining their own lives as well was a cool, new concept. This season though, it just rang false. It’s part of the special snowflake syndrome that Steven Moffat inflicts on his protagonists. Clara, despite not having any sort of training, despite being a part-time UNIT consultant, is just so much smarter and better than everyone at UNIT. It’s okay if Clara has ideas no one else comes up with. Clara, being a teacher, having travelled with the Doctor should have a different perspective. Instead, she’s shouting out suggestions that anyone in a high level military organization should have thought of already. But no. They couldn’t. They had to wait for Clara, a civilian to get there and take charge.

The frozen planes feel like they could have been an episode all on their own. It had the makings of a classic Doctor Who story – mysterious, clearly extraterrestrial goings on, with the potential for great danger. And we know it was extraterrestrial thanks to the cringe-worthy line said by a UNIT technician: “Pardon  my sci-fi, but this is beyond any human technology.” Pardon your sci-fi? You work with a top secret organization that specializes in investigating aliens. Pardon your sci-fi? Are freaking kidding me? I mean for the love of-

Anyway, the planes are traced back to Missy, who somehow managed to not die last season. How? Not important, apparently.* She knows the Doctor is in danger and wants Clara’s help to find him. What follows is another unnecessarily long scene of the two women tracking the Doctor down to medieval England.

Here the Doctor is partying like it’s his last night alive. Of course, that involves a lot of anachronisms, as the Doctor entertains the medieval people. It’s funny at first, but then the scene starts to drag. Once the Doctor, Clara, and Missy are finally reunited, Colony Sarff takes them to Davros. Finally.

All the build up lead to this meeting where nothing was resolved. Oh, and Clara and Missy are both killed by Daleks, but death means absolutely nothing on this show, so whatever. Seriously, in this episode, both Missy and Davros came back. And the last time either of them were seen, they were pretty dead. Okay, Davros wasn’t dead, he was screaming on a burning, exploding spaceship, refusing to let the Doctor save him, but that’s close enough.

It felt like the entire episode was just building up to the cliffhanger ending. There’s nothing wrong a cliffhanger ending. The problem with “The Magician’s Apprentice” is so much of it felt like filler. While Peter Capaldi was rocking the scene in medieval England, it was self-indulgent, going on for at least a minute or two longer than it had to. The sequences when Colony Sarff was looking for the Doctor also dragged. And the thing with the planes was poorly executed. It could have been its own episode, but it didn’t work as a subplot. It was too rushed, but also took up a lot of screen time. In the end, “The Magician’s Apprentice” barely had the Doctor and his dilemma in it.

What’s so frustrating is this episode had a great concept. They included a clip of Tom Baker’s Doctor wondering, “If someone who knew the future pointed out a child to you and told you that that child would grow up totally evil…could you kill that child?” It’s a classic time-travelling conundrum, but the episode didn’t address it except in the beginning and at the very end. This interesting moral question just bookended a whole lot of filler subplots.

And the fillers weren’t even that interesting. It’s time, it’s really, really time for Doctor Who to get out of its comfort zone. I like Clara, and I like Jenna Coleman, but I’m glad it was announced this is her last season. Doctor Who is a show about change, and companions are supposed to be temporary. Clara has already had a few major arcs, and by the start of this season, she’s starting to feel a bit stale. Perhaps some of this comes from the fact that she’s only time-travelling part time. Travelling with the Doctor is something that would realistically take over a person’s life, but it seems almost like a hobby for Clara. Likewise, teaching is a job that consumes a lot of time, but Clara seemed perfectly happy, almost excited when she noticed the planes were frozen, and she had a reason to ditch her classroom. It’s starting to feel like Clara is a bit of a flake – part time universe-saver, part time teacher, part time UNIT consultant.  If she can’t commit to anything, it makes it hard to commit to her. It’s a step back. Clara feels like she’s run her course, and I for one am excited to see Coleman move on to other projects (Queen Victoria miniseries, anyone?).

Surprisingly, Michelle Gomez finally won me over as Missy this episode. I think it was her delivery of the line, “No wait, hang on a minute. Davros is your archenemy now?…I’ll scratch his eye out.” I still have problems with the concept of the character. (It’s cool we have a female Master, but why did she have to be renamed Missy. Why does the female version of the Master have to be so flirtatious with the Doctor. Why do 90% of the recurring/main female characters under Moffat’s reign have to be flirtatious with the Doctor, for that matter?) But whether or not I like the concept of Missy, she’s apparently here to stay, so I might as well enjoy Gomez’s madcap performance, because Gomez is great fun.

As if it’s not enough to bring back Missy, we also brought back Davros. Honestly, bringing two of the Doctor’s main arch-nemeses back in the same episode felt a bit season finale-y. But whatever. I’ll reserve judgement until the next episode to see how they resolve the Doctor and child-Davros issue. It was barely touched on, and was the only interesting part in bringing Davros back. Otherwise it’s the usual back and forth. The Doctor tells Davros he was wrong to create the Daleks, the universe’s ultimate killing machines. Davros stands by his decision, and tells the Doctor he’s stupid for having feelings. Yawn.

“The Magician’s Apprentice” was just a clunky episode. There was way too much set-up, and no satisfying climax. Also, while the Doctor appears to be the titular magician (when he was in medieval England), it’s not clear who the apprentice is. I wanted to enjoy this episode. I really did. But it was too all over the place. It felt like several episodes crammed into one, so there wasn’t time to get invested in any of them.

But instead of just feeling frustrated, I’m going to try and focus on the positives. Like Capaldi’s Doctor. Twelve is great, even if his storylines are questionable. Peter Capaldi is also great. And halfway through the Doctor’s confrontation with adult Davros, my mind started to wander- because it’s the same basic dialogue that has been said before when the Doctor talks to Davros (or any Dalek, really). And I thought, “Davros is such an iconic Doctor Who villain. Capaldi is a well-known Doctor Who fanboy, having loved the show in his youth. It was probably a really exciting moment for him, to interact with such an iconic figure from his childhood. Isn’t that nice?” It would also be nice if Capaldi got better scripts, but we can’t have everything.

*I shouldn’t be surprised that Missy’s return was never explained. After all, this episode and series are under the writing direction of Steven Moffat. And Moffat has a history of not explaining how characters survive events that should have killed them. Yes, I am talking about the second season finale of his other show, Sherlock. It’s been years.