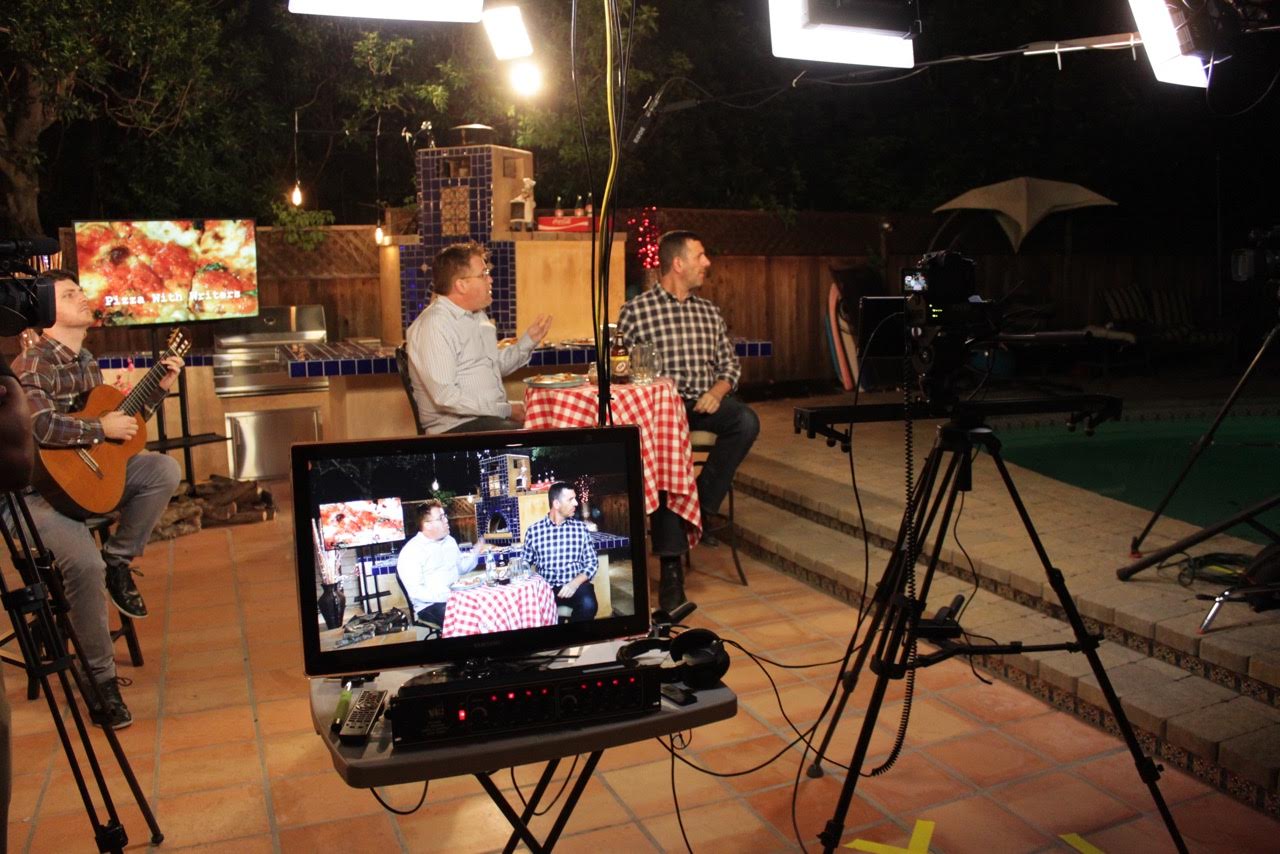 Jon Hotchkiss is a veteran of the TV industry. He has been nominated for 14 Emmy Awards and written for shows including Penn & Teller. He worked with several major studios before founding his own company, Hotchkiss Industries, where he has been the creative force behind webseries such as Get Sexxx Tonight and This vs. That. I met Jon at San Diego Comic Con, where he told me about his path to creative independence, and his new webseries, Pizza with Writers (which you can watch now).

Your show is called Pizza with Writers. Can you explain the concept behind it?
It’s an interview show where I interview writers and the creators of various television shows, from shows like Arrow, the new Muppet show on ABC. The head writer from Tosh.0 is one of our guests, a writer from Family Guy, the head writer from the Justin Bieber Roast, writers who used to work for Howard Stern and Dennis Miller and Bill Maher and Curb Your Enthusiasm and Penn and Teller.

Think Comedians in Cars Getting Coffee that Jerry Seinfeld does. Only, instead of Jerry Seinfeld, it’s me. And instead of comedians, it’s funny people who are the writers and creators of mostly comedy programs, although not entirely comedy. And instead of us drinking coffee, we’re making pizza in my backyard because I have an outdoor wood-fired pizza oven. I’ve been a huge fan of pizza my whole life and I decided a few years ago to build a wood-fired brick oven. And so we make pizza and then talk about writing.

Was that how you justified building the oven- like, “Oh I have a great idea for a show”- or were you like, “Hey, I have this oven already”… ?
No, I wanted to do it a long time ago. It’s funny. There are a few things that I know something about. One of which is pizza. And I just went, “I should have a thing I like”. So we just built a wood-fired pizza oven. I’ll tell you the thing I tell people- what’s the most expensive thing you’ve ever bought?

A computer probably.
A computer. So this is a good example. So, before you bought your computer, you probably said, ‘Oh I need a computer. Maybe I’ll go Compact, maybe I’ll get a Dell, maybe I’ll get the Mac.’ And you thought about it and went to the Mac store, and got a Mac. And you were excited for a week that you had a new Mac but then you were like, ‘Eh’. I have not had that experience with the pizza oven. I love it all the time. It hasn’t been a disappointment. It hasn’t been like, ‘Oh I have this thing, big deal’. It’s a thing that people like to stand around. They like to watch and they want to help and they want to make pizzas.

Has there been anybody on the show that’s just a disaster at making pizza?
No, no, no. There’s been none of that.

Tell us about becoming an independent producer.
This is the third independently produced television series that I’ve made. After making shows for NBC, Comedy Central, Showtime, the Science Channel, TLC, Playboy TV, half a dozen or more cable channels and networks. And having my work- I was going to say stolen, but they didn’t steal it, they pay you- but having your work augmented and changed, and ‘Oh, we like it but let’s do it more like this’, and just because it’s their money, they get to tell you how and which way to make your programs. And I got tired of that. I got tired of working for people and so I started to make shows on my own. And I now have created 20 hours of television shows that are of equal quality to the work that I did for the broadcasts cable networks.

I did a 6-hour series called This Versus That which is a big science show that’s a little like Mythbusters, but entirely different where we compare things in since that happen to people in the real world. Like, what’s the fastest way to load 100 passengers on an airplane, right? Do you load them front to back, back to front, do you seat people from the side to the middle, do you seat them from the middle to the sides? So we did a big experiment to find out. So that’s one series called This Versus That.

And now the third series is Pizza with Writers which is an interview show where I interview writers and the creators of lots of your favorite primetime programs.

Are you planning on continuing the Pizza with Writers series?
Yes. I would like very much to make more. Right now there are 13 half hour episodes.

The thing that people don’t realize is that the means to make a television show are now affordable for television-making professionals. And the thing that used to be hard was the distribution of television. You needed a satellite. You needed to have access to the cable companies. But now all you need is wifi. So now, seriously, I can distribute my program and make it video on demand just like Netflix. Just like Hulu, right? From my desktop. And that is something revolutionary for television creators.

Now, the only thing that separates us from the broadcast networks and cable companies is their ability to market and to get their programs in front of people. However, if I can make the show for less money, I can make my money back and be successful even if I have fewer viewers. And that’s what I’m hoping people will gravitate towards. That they will like the idea that they can see a program that isn’t homogenized, that isn’t guided by the principle of ‘how can we make this the broadest material for the most people by watering it down, by making it the least offensive’. My shows are 100% uncensored, 100% unregulated by the federal government. There’s no money in it from advertisers. It’s all advertiser-free and I think that people will like the idea of seeing programming from a unique perspective of a television creator that hasn’t been homogenized by the networks.

[At this point, two guys interrupted the interview. They had seen Jon on Reddit and asked him about his free pizza advertising campaign he mentioned, where he said he would give a slice of pizza to everyone who saw him at Comic Con. While he was out of coupons, he gave them some cash to buy pizza, because he wanted to honor his promise.]

For people who are interested in popular culture, if you’re interested in what goes on in TV, here’s an opportunity to meet and to hang out with the men and women who write [those shows] and to find out what it is that makes them laugh, why they like to tell stories, how they make people laugh, how they get their ideas, how they actually work, the sort of creation that goes into a show like Arrow or The Muppets, or what goes into making a show like The Daily Show or Conan or Tosh.0, right, what goes on behind the scenes when people start with blank pages, then go, ‘oh, we have to make a show’. Well how does that work? That’s what the show’s about. And it’s funny.

How regularly are you going to be releasing episodes?
They’re going to all be released on the same day so you can go and watch all 13 half hours. You can watch all of the episodes from This Versus That, Get Sexxx Tonight and get Pizza With Writers for about 3 and a half bucks. And I know that people are accustomed to watching stuff on YouTube and they think that video is free. But I also think that people are able to make a distinction between 3.5 minute clip of something free they see on YouTube, the difference between that and a TV show that is 30 minutes, maybe 40 minutes, and that has been made by television professionals. That they’re going to get the same quality episode by episode, and they’re going to see that it’s a richer experience than some 3 ½ minute video that they saw on YouTube. All three of my shows are the kind of show that if you watch there’s going to be some interesting takeaway. It’s going to make you smarter. It’s going to save you money.

On This Versus That, there’s information in there that will save your life. Just as a for instance, God forbid you’re in a plane crash, which would more likely save your life- the seat cushion or the life vest? You get on the plane and people are like ‘oh well, it had one but not the other, what if we crash?’ Well what if you only had two seconds to make a decision? We interviewed people who survived a plane crash and had to make that decision. And we talked to pilots of United Air to explain to us what it is that people should do. And then we demonstrated it. And we show people clearly what to do in the event of an emergency and how to save your own life.

So it’s funny and life saving.
Yes. I’m interested in factual entertainment, right? I think what I have the ability to do is to make learning fun. And I don’t mean that I’m trying for you to learn. What I mean is that I personally find the information interesting. And I think that I have the unique ability to make that interesting information also entertaining. And that’s what I do in all of my shows.

The other thing I like is taking that concept that you’re familiar with and subverting it a little bit. So, we expected a straight sort of interview show, well no, it’s we also make pizza together and that’s sort of funny, and you see all of that process, and people reveal themselves in interesting ways. So you get some insight into how people work and you might even learn something.