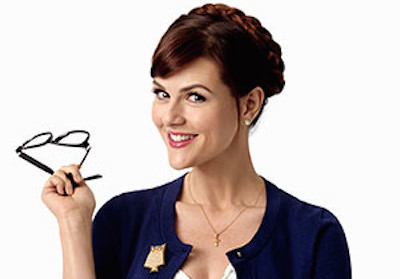 Sara Rue has appeared in many TV shows over the years from Popular to Less than Perfect. Now, she stars in TV Land’s new original series, Impastor, which tells the story of “Buddy Dobbs (Michael Rosenbaum), a slacker on the run from a loan shark, [who] steals a man’s identity and ends up posing as a small town’s new gay pastor.” Rue plays Buddy’s assistant Dora. We caught up with her at San Diego Comic Con and asked her about her upcoming show.

What drew you to the show? It’s kind of an unusual concept.
Yeah, I thought the script was so hilarious. It’s very rare that you get sent a script and you laugh out loud when you’re reading it, and I did, multiple times. And I just thought it was something that I had never read before to have a very dark comedy with a procedural element in that every week it’s going to end in a cliffhanger, there’s sort of a murder mystery who-dun-it element to the show and I just thought I love the combination of the two.

Was there anything in particular about Dora that made you say “I want to play her?” or was she part of the package?
No, I really loved Dora. I loved her spirit. And I also like the idea of playing someone who was so devoutly religious but also progressive and wanting to hire an openly gay pastor to come to her church. I thought that was cool and I’d never seen that before, and I’m a big supporter of human rights and I thought that was kind of awesome to portray someone with that- liberal when you don’t necessarily expect somebody to be that liberal and that open, and that person is really cool to me.

Another big part of the show is the small town atmosphere. Was there anything in your past that you were able to draw from when diving into that world?
That definitely was the hardest one for me because I’m from Manhattan. I’m born and raised in New York City. I did spend quite a bit of time in my childhood in Lexintgon Kentucky- which is still a small city, not town. So I just kind of had to guess, and, like, talk different… the element of knowing everybody is something that was really foreign to me. But I could imagine how that would be a very intense experience if everything you did, everybody knew about all the time and talked about. It’s sort of like tabloids or the press. You know, like when I was pregnant, people were camped outside our house trying to get a picture and that was so invasive and weird, and I could imagine that if you lived in a town where everybody knew your business, you might feel the same way, if you wanted to have a little privacy. So I just started thinking about that.

If you could steal the life of any of your cast mates for the day, who would it be?
Gosh. I think I would steal Mike Kosinski’s life for the day and be a genius improvisational performer. He does tours and he still works at Second City and that is so fun. And I’d love to get to do that for the day.