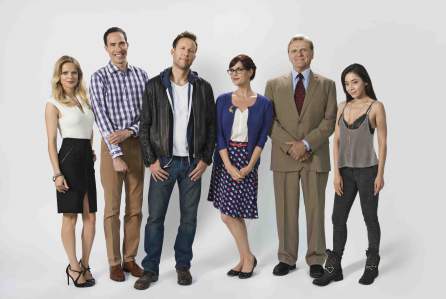 Most of the memories I have of TV Land are watching it with my grandparents, because watching Bewitched and I Dream of Jeanie reruns was the safe option. TV Land is all grown up. Now they have new shows, like Impastor, a dark half hour comedy whose lead Buddy Dobbs is decidedly less grandparent friendly than Samantha Montgomery.

Buddy is a slacker who feels the walls closing in on him. So much so, he decides to jump off a bridge. He’s stopped however, by a well-meaning stranger, who then accidentally falls instead. Buddy steals the man’s identity, and quickly finds himself pretending to be the new (gay) pastor of a small town.

It’s a pretty outrageous concept, but TV Land might just manage to pull it off. It’s not a perfect show, to be sure. There are a few moments that the humor fell a little flat, or felt forced. In one scene, Buddy spoke to the disrespectful adolescent son of one of his congregation. He threatened the boy with eternal damnation, saying if the boy didn’t respect his mother, Buddy would use his clout with God to see the boy punished. And it worked. Would a pot-smoking, rebellious teenager do that fast a turn around? The scene was funny, but it also felt a little heavy handed and didn’t quite manage to convince that Buddy would pull off his farce.

Impastor gets a pass, because a lot of pilots- especially ones with crazy concepts- are a little blunt, because they have so little time to demonstrate what makes their show different from other shows. A lot of times it takes a show a week or two to find its voice, and Impastor is promising enough that it deserves at least another episode to tinker around with its humor. I was pleasantly surprised that the show avoided being homophobic. When I read the tagline, it made me a little wary. Sitcoms aren’t historically the most LGBQTA progressive places on TV, and if the show’s concept was about a straight man pretending to be a gay pastor in a small, conservative town…it seemed like there was a lot of potential for some unintentional homophobia. But the only examples I found in the pilot were an individual character’s prejudices, which he was chastised for, which is a good sign.

In fact, the characters in Impastor are pretty open minded. It’s refreshing, because a lot of TV shows would make a conservative, religious small town a hostile environment. Sure, the church president, Schmidt is old-fashioned and disapproving, but he’s the minority in this case. And he’s repeatedly told off by Dora (Sara Rue), Buddy’s perky assistant, who is proud of her church for hiring a pastor who is out of the closet. Rue is charmingly dorky in her role. While Dora is sheltered and a little naïve, she has an assertive streak, and is so determined to make Buddy’s appointment work, you kind of hope it does too.

Buddy is played by Michael Rosenbaum. (He was Smallville’s Lex Luthor, in case you had trouble placing him). In the wrong hands, Buddy would be awful. After all, he stole a stranger’s life, and is lying to an entire church. But Rosenbaum is likable enough that while Buddy isn’t a good person, there is a glimmer of hope he’ll redeem himself, which the show needs in order to work.

The ensemble members of the cast so far have been good in their supporting roles; it’s a little too early to be able to judge much more, since the pilot was very Buddy-centric as it established the premise. As he gets settled in, hopefully some more time will be spent getting to know the town’s inhabitants.

So while not perfect, Impastor is worth a watch. If not because it has a charming and likable cast, because of its whacky concept. TV Land hasn’t in the past been known for having shows that break the mold. Impastor’s audacity here should be rewarded by at least checking out the first few episodes to see how this gamble pays off.