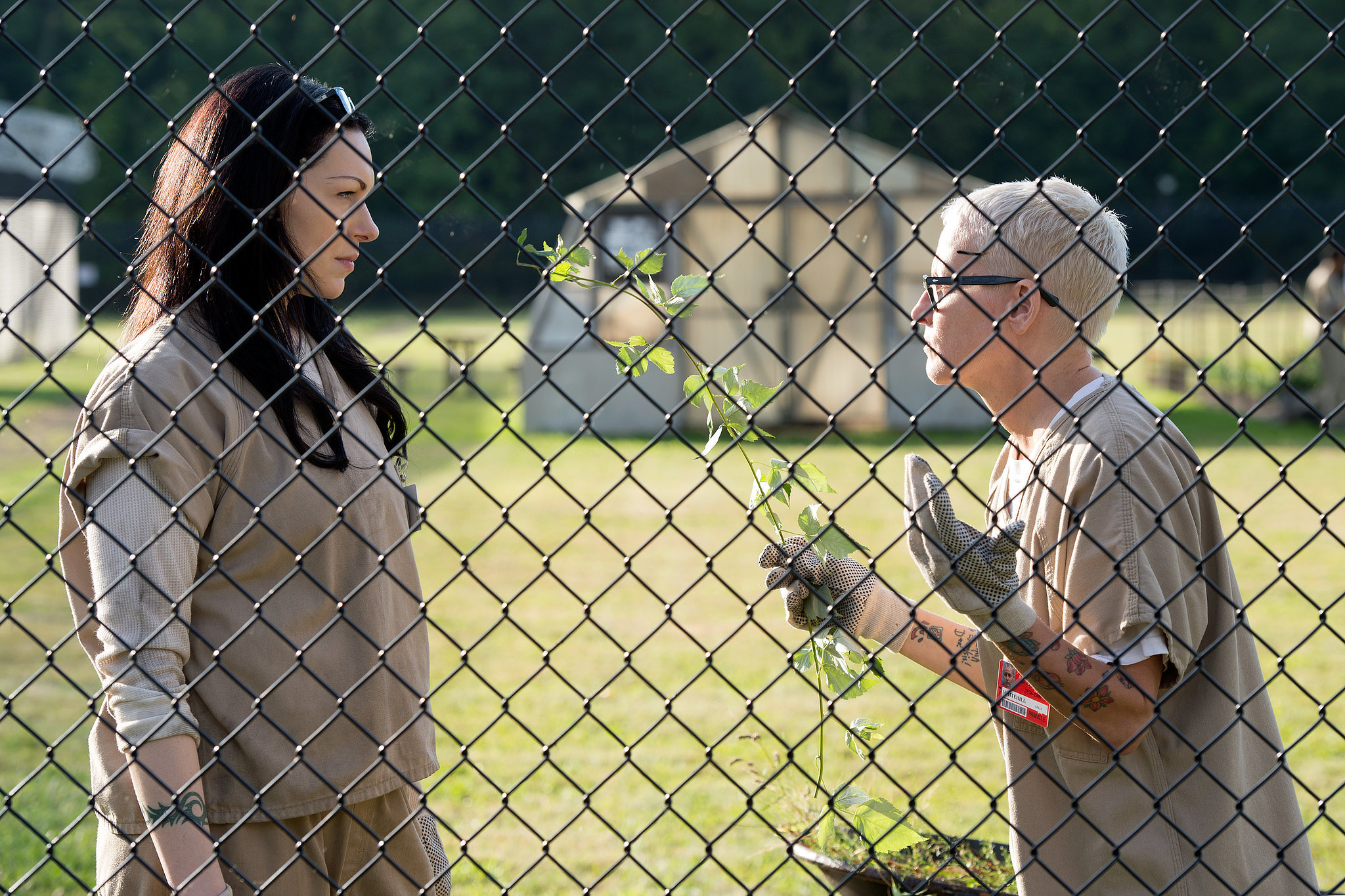 Episodes 8 through 11 of Orange is the New Black (“Fear, and Other Smells,” “Where my Dreidel At,” “A Tittin’ and a Hairin,’” and “We Can Be Heroes”) got intense. We saw backstories from Alex, Leanne, Pennsatucky, and Caputo.

Leanne’s backstory was particularly interesting. We’ve seen her become more and more aggressive in the Norma religion/cult and the tensions that’s creating with Soso and Pousey and now we know why. She was very attached to being Amish and this new religion was something she could hold on to. It created a lot of complexity for a character we didn’t know too much about. However, things are starting to go too far with Soso.

A lot happened to many of the characters in Litchfield during episodes eight through 11. First of all, the employees are starting to organize, which we all knew was going to happen. And it looks like Caputo is going to help after Angie almost escaped.

Suzanne, meanwhile, hit it big with her sci-fi/erotica story. It sounded creative to say the least and very entertaining.

For now it looks like Daya is giving her baby to Pornstache’s mother despite the fact that he’s not really the father. But we’ll see how that really turns out.

Some of the inmates tried to prove they were Jewish so they could get the better Kosher meals to no avail. I thought this was one of the funniest storylines on OITNB so far.

Piper, meanwhile, is getting more and more into her business. So much so that Alex left her. Honestly, Piper is starting to get on my nerves and she should know by now that this is a horrible idea. I still love Stella, though.

Morello had been writing to a bunch of guys and one of them freaked her out, so she sent another one to attack him.

But the most intense storylines were with Alex, Sophia, and Pennsatucky. Alex was convinced that Kubra had sent Lolly to kill her, especially since Lolly had been writing down Alex’s routine. So Alex attacked Lolly. But it turns out that Lolly was really paranoid and was convinced that Alex was working for the government.

Sophia and Mendoza had been fighting over which son was the bad influence and things got physical. Sophia accidentally hurt Mendoza and the other inmates started to ostracize Sophia and said some really transphobic things.

Pennsatucky had the most devastating storyline though. We saw in her backstory “A Tittin’ and a Hairin’” that she had really bad experiences with sex. But she fell in love with a boy and started to like sex. He moved away and another boy raped her.

Meanwhile, in the present, Pennsatucky got close with one of the new guards, Coates the donut guy. And things went wrong fast. You could tell that Coates was a terrible guy at the pond. And then he raped Pennsatucky during “A Tittin’ and a Hairin.’” It was absolutely heartbreaking and so hard to watch. Big Boo found out and promised that they’d get him.

I’ve loved watching Pennsatucky and Big Boo’s friendship progress. Hopefully they’ll get Coates out of there.