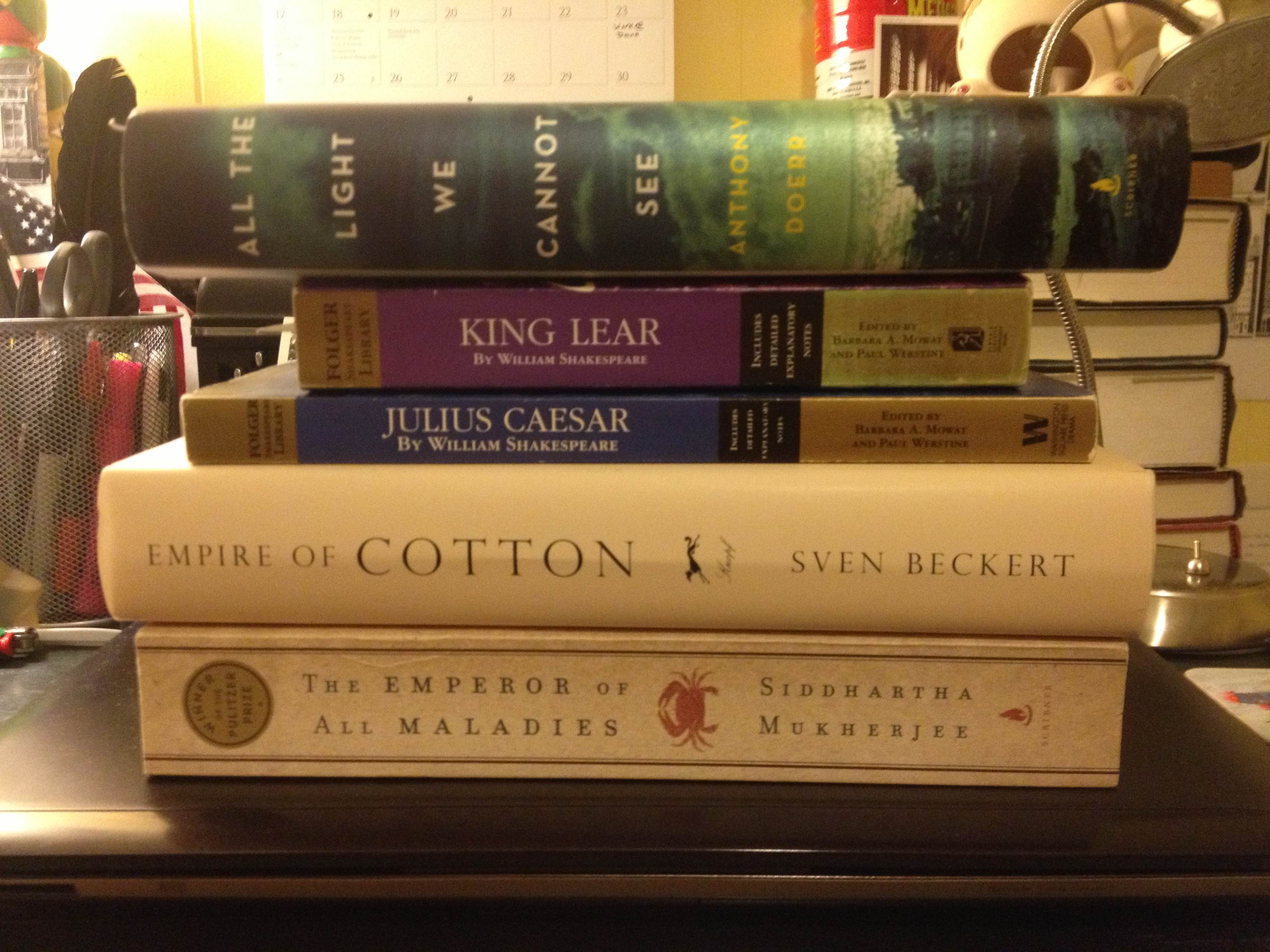 Anthony Doerr’s All the Light We Cannot See
Book one is this month’s selection for BU’s Core Curriculum alumni book club. We chose the book because we needed a pick that was fast and pleasurable, yet wouldn’t skimp on substance or intelligence.

Doerr’s book is the winner of the Pulitzer Prize in Fiction, was a finalist for the National Book Award, and was on the New York Times Book Review’s 10 Best Books of 2014 list. The setting: Europe during the last excruciating days of World War II. The characters: a blind French girl and a tech-savvy German boy, neither strangers to early, personal tragedy. As stated on the book’s dust jacket, Doerr’s story connects the lives of these two youths and “illuminates the ways, against all odds, people try to be good to one another.”

Shakespeare’s Julius Caesar
I’ve owned a copy of Julius Caesar for several years, and have never made a second attempt to read it (second after my first confused perusals in middle school) until now.

There must be something in the Boston summer air that makes folks itch to see political conspiracy enacted in the bloodiest, most public of fashions. Bridge Rep Theater just finished their run of the play on May 31st, and Gazebo Players of Medfield will be producing it in July.

Though often viewed has a talky, slow-paced, penis-ridden work of the Bard that hasn’t aged as well in the 21st century as it had in the centuries prior, JC highlights many of the various themes well-known to Shakes-fans of other works. To name just two: Cassius’s manipulation of Brutus’s own fears and doubts evokes Iago’s persuasive skills minus his occasionally-cartoonish villainous antics, and Brutus’s hesitation to kill Caesar coupled with the supernatural events that precede the Ides of March reminded me of the frightening anticipation and bloody phantasmagoria soon to be immortalized by Macbeth.

I’m looking forward to reading this play; in Caesar’s Rome, Shakespeare’s England, and our global world of today, men (and women) seem doomed to “construe things after their fashion, / Clean from the purpose of the things themselves.”

Shakespeare’s King Lear
Commonwealth Shakespeare Company is taking on the challenge of staging King Lear for their summer Boston Common production. I don’t envy the task: projecting to a large park full of onlookers the ancient tragedy of King Lear is no mean feat.

This play is often argued to be Shakespeare’s finest (Hamlet be damned), but it is no wonder the Victorians hacked it to pieces, often staging it without the ending or modifying it to end on a dubiously saccharine note. This play of loss (of kingship, of family, of purpose, of sanity) is almost unbearable grim even as it resonates with poetic power. It is difficult to cut and not full of easily-translatable yuks. It also involves scenes in which men have their eyes plucked out and think they are falling off the cliffs of Dover.

All that being said, this play is too magnificent to shy away from. From a fairy tale archetype (a father of three daughters who makes terrible decisions that are not reconciled til the end of the story), Shakespeare expands on the most human of experiences: coming face-to-face with death and oblivion. To quote William Hutt from the show Slings and Arrows: “You can go right through the ages of man with Shakespeare, and in the end he gives you this enormous gift of Lear, to anticipate your own decay.”

Sven Beckert’s Empire of Cotton
Winner of this year’s Bancroft Prize and a finalist for the Pulitzer Prize in History, The Empire of Cotton: A Global History is Sven Beckert’s second book, following his previous title The Monied Metropolis: New York City and the Consolidation of the Bourgeoisie, 1850-1896. The Laird Bell Professor of American History at Harvard, Beckert makes a compelling argument for why cotton, a crop very likely to be woven into the clothes you are wearing as you read this sentence, was the “launching pad for the broader Industrial Revolution.”

Beckert’s main point is that by studying cotton, one can observe the “history of capitalism in action.” Unlike the production of other commodities fueled by slave labor and political exploitation, European trade in cotton resulted in “large industrial proletariats…the rise of vast new manufacturing enterprises…[and] huge new markets for European manufacturers.” This book proves that studying imperial expansion and slavery adds more to our understanding of contemporary economic reality than merely sticking to staid visions of European union men and women striking for rights in industrial hell-holes such as 19th century Manchester.

In other words: “Because of the new ways it wove continents together, cotton provides the key to understanding the modern world, the great inequalities that characterize it, the long history of globalization, and the ever changing political economy of capitalism.” Although Thomas Piketty has been making waves with his magnum opus Capital in the Twenty-First Century, I’ll first be spending some time with Beckert to get up to speed on how current capitalism was shaped.

Siddhartha Mukherjee’s The Emperor of All Maladies
By night I write theater reviews and book lists, but by day I work at the Dana-Farber Cancer Institute. I schedule lung cancer patients to meet with doctors, nurses, and social workers, to get their blood drawn and analyzed by lab services, to receive MRI and PET scans, to be treated with radiation and chemotherapy.

It was a patient who told me about the Ken Burns documentary just released by PBS titled Cancer: The Emperor of All Maladies. I knew the film was based off of the Pulitzer Prize-winning book of the same name by Siddhartha Mukherjee, so I figured it was high time to read it.

Mukherjee’s book is a “biography of cancer,” in which the author attempts to “enter the mind of this immortal illness.” Trained as a medical fellow at Dana-Farber and Massachusetts General Hospital, currently a cancer physician and researcher based at Columbia University, Mukherjee provides historical background and contemporary understanding of this disease that we may (or may not) be able to one day vanquish.

As the patient spoke on the phone about the documentary in the midst of our discussion of his scheduling issues, I realized that working in the heart of DFCI can make cancer feel like a constant rather than a condition. It can be easy to forget the ongoing struggle for the organization to no longer exist, to no longer be needed in a cancer-free world. This is not right. So, I’m eager to read this book to further understand the disease that affects the life of every single person I work with every day.