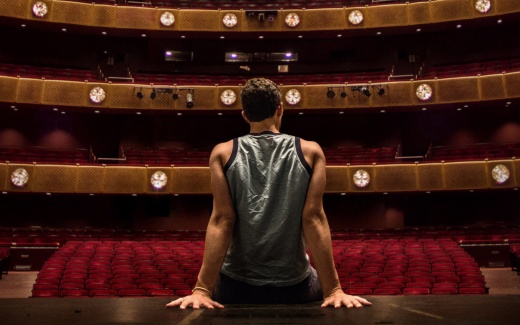 I heard about director Jody Lee Lipes’ Ballet 422 because, during its run at Toronto’s Hot Docs Cinema, it was preceded by a short dance film choreographed by the National Ballet of Canada’s wunderkind choreographic associate Robert Binet and directed by My Theatre Award winner Dylan Tedaldi (one of my favourite dancers in the company). To my delight, the feature-length documentary made my decision to pay full price just to see a 2-minute short (which you can now watch HERE) a brilliant gamble rather than a somewhat irresponsible use of my money. (Note: the pairing of the short with the doc is particularly interesting in retrospect since it’s now been announced that Binet will be choreographing next season for the New York City Ballet, the company featured in the documentary).

Lipes’ straightforward storytelling and strong pacing excellently focus the spotlight on young choreographer Justin Peck whose frantic and high-stakes experience staging his first original ballet on the New York City Ballet mainstage (the company’s 422nd original work) is insightfully framed by scenes of him as a dancer with the company, lost in the 56-person corps.

Peck is a fascinating subject, a tightly wound but very green perfectionist whose clarity of vision and precarious confidence level battle it out as he attempts to keep his composure while staging a massive-scale production featuring the incredible New York City Ballet dancers (keeping in mind that, as a member of the corps, he’s technically instructing his “superiors” when working with the principals). It’s a thrilling glimpse behind the scenes of one of North America’s greatest dance companies, complete with diva ballerinas (“I just get so weird when my hair is low” complains the worst of them to her amiable stylist) and standoffish orchestra (tempered by a lovely, supportive pianist who gives Peck the hint that he should take a moment to thank and instruct the orchestra personally before opening night).

Ballet is a traditionally cloistered art form that’s been making huge strides in the past few years to open its doors in the hope of attracting new audiences (live streaming on World Ballet Day, teaching class on stage) but the unprecedented access and insight of Ballet 422 is, still, unprecedented.