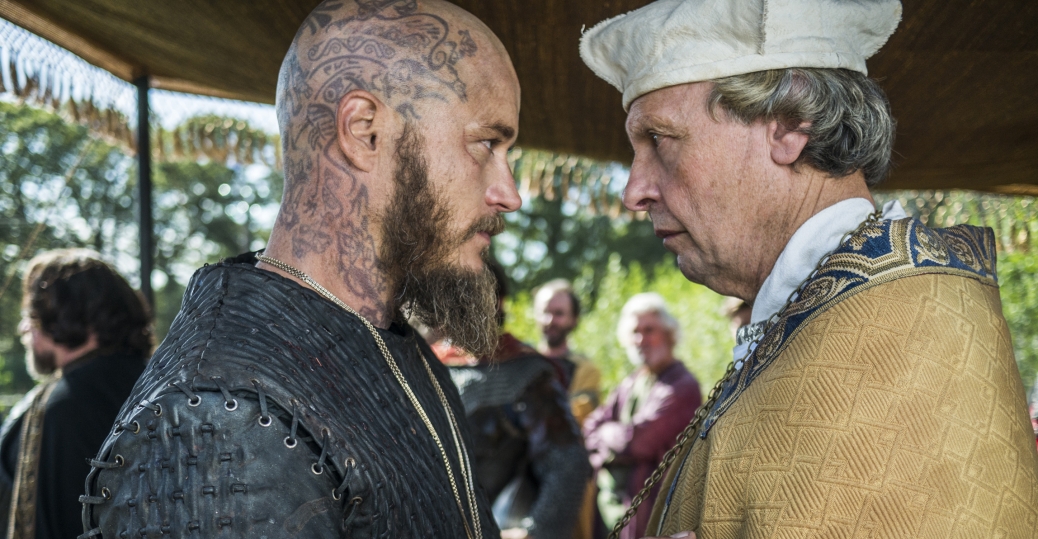 Catching up on Vikings

After Athelstan, my favorite character on Vikings was went off to the North Pole with Santa and his elves and live happily ever after, I took a break from the show. But Season 3 of Vikings is wrapping up this week, and it’s honestly too good to stay away from for very long.

Here are mini-reviews for the last three episodes of Vikings.

“Paris”
After its dramatic predecessor “Born Again”, “Paris” felt more like a set-up episode. The set-up was important, but ultimately not as interesting as previous episodes. Long at last, the Vikings reach the shores of Paris.That’s pretty much it, other than reaffirming that there is tension in the ranks.

While the Vikings have left England behind for the time being, time hasn’t stood still there, and there’s plenty of political drama going around. At the center of this tangled web is King Ecbert. He might be a terrible person, but watching him plot against one ally, his daughter-in-law’s father, no less, and struggle reign in another, Queen Kwenthrith is always fun. Tension is ripe in the royal family, with Aethelwulf still angry at his wife for having Athelstan’s baby. It doesn’t help that Ecbert has legitimized (and named) little baby Alfred and isn’t hiding the fact that Alfred is his favorite grandchild. It’s really a question of when, not if the political situation is going to implode.

We also get our first look at the Parisians, lead by an incompetent emperor, and his stubborn daughter, Gisela, and the poor man tasked with protecting the city, Count Odo. The set decoration and costumes for the French are gorgeous. The Parisians exude sophistication and wealth, so it’s clear why they’re a target for the Vikings in the first place. Luckily, they have the determined Count Odo and zealous Gisela defending the city. Raiding Paris probably won’t be as easy as the Vikings are anticipating.

“To the Gates”
This is where all the setup begins to pay off. The Vikings begin their raid on Paris, and it does not go well. For the Vikings, at least. It’s been a while since a raid has been met with such resistance, so to see the Vikings actually struggle was satisfying. The only Viking who anticipated how badly the raid would go was Ragnar, who asked Floki to lead, knowing full well it would end in disaster as a sort of psychological warfare as revenge for killing Athelstan.

Floki’s unravelling is a long time coming. He has gone from Ragnar’s eccentric friend to a dangerous fanatic. True, his devoutness to the pagan religion has always been there, but his extremism has grown more aggressive and delusional. This is a storyline years in the making: Ragnar’s tolerance for Christianity and Floki’s committment to the Norse gods caused fractures in their relationship, and soon, (assuming Floki doesn’t self destruct first), the two former friends will face off.

His mental breakdown happens during the failed siege. The siege is horrible, and bloody, and violent. The Vikings team took full advantage of a new raid environment, having the Parisians implement new defense tactics that the audience and the Vikings haven’t seen before. While some of the CGI’d longshots of Paris aren’t always great, the close-ups are consistently visceral and effective. Princess Gisela is proving a worthy adversary. Her fervent belief in God and political savvy in turning the battle not into just a defense of Paris, but a defense of Christianity is a great contrast to the Vikings’ belief in fighting for their gods and reaching Valhalla.

The one thing that didn’t fit in this episode was Porunn leaving behind Kattegat, her baby, and Bjorn. It was a lame ending to a pointless storyline. Bjorn was always prophesized to marry someone else, and his relationship with Porunn was never convincing enough to make you root for them against Bjorn’s destiny. On paper, Porunn’s story should have been awesome: she went from being a slave to a shieldmaiden, and captured the heart of the king’s son. In practice though….she spent a lot of time talking about how much she wanted to be like Lagertha, who is Bjorn’s mom. (Bjorn’s mom is awesome, but that’s still weird). Porunn claimed to be ready for battle, only to get almost immediately seriously injured. Of course it’s awful Porunn’s youthful arrogance backfired so badly, but it’s hard to have much sympathy for a couple that decided the inexperienced woman should go into battle, knowing full well she was pregnant at the time. This is a character that had so much potential, but was unwilling to put in hard work, so she failed. She didn’t train enough, so she failed as a shieldmaiden. She didn’t try to work through her relationship, so she failed as a mother and wife. She didn’t fight enough for things she wanted, so she failed as a character. Her departure broke up the flow of the episode, but at least, hopefully she’s gone now. If she comes back, hopefully Michael Hirst will give her a chance to work at some character development.

“Breaking Point”
Breaking point indeed. This episode sets everything up for a dramatic season finale. At the center of it, of course, is Ragnar, who seems to be slowly dying from internal injuries he sustained from a fall in the previous episode. He’s injured badly enough that as part of his negotiations with the Parisians, he demands to be baptized, so he can be reunited with Athelstan in heaven. And of course, his closest Viking allies stroll up just as the baptism finishes, so if Ragnar’s life wasn’t in mortal danger before, it certainly is now.

Floki’s reaction in particular is incredibly satisfying. He justified his murder of Athelstan by saying it was a sacrifice for the gods, and that he would free Ragnar from Athelstan’s poisonous influence. Apparently it doesn’t matter what religion you are, karma is always going to be a bitch. Floki’s crimes had the exact opposite effect he hoped they would. After the initial siege failed, Floki is convinced the gods are punishing him, and now his oldest friend has turned his back on the pagan religion that used to bind them. As long as Ragnar has breath in his body, he’s going to extract his revenge, but it’s nice to see Floki feel betrayed first because he deserves it.

Even several episodes after his death, Athelstan’s influence can be felt, especially with King Ecbert in England, who is kind of obsessed Athelstan. In the middle of trying to seduce his daughter-in-law (yeah, it’s pretty messed up), Ecbert stopped to wonder how Athelstan is doing. (Considering he got an axe in the face not good). He still fawns over Alfred, Athelstan’s grandson. Ecbert is a very political animal, so this probably all fits into one of his schemes, but it also feels increasingly like a convoluted plan you’d see in a 90’s romcom about how a crazy person would try to win back their significant other, despite the fact that Ecbert and Athelstan weren’t ever a romantic couple.

I’m not saying this is a bad thing. In fact, as far as favorite characters dying, this is the ideal. I want other characters to be sad and angst about their loved one’s demise. (Like Ragnar, who is wandering around the woods, talking to himself  because he’s so distraught.) And I want the deceased character to leave a lasting mark on the show. Depending on how closely Vikings decides to follow actual history, Alfred is destined to be an important player, since he plays a big role in the real Vikings vs Englishmen saga. Historically, King Alfred wasn’t the legitimized bastard child of an ex-monk and a princess (that we know of), but Michael Hirst decided to write it that way, so in this bizarre version of history, Athelstan lives on. I’ll take it.

It’ll be interesting to see when the Vikings and English come head to head again. There must be plans in the future, or why bother showing the political struggles in England? For the time being, the Vikings are preoccupied in France. The nighttime invasion scene, where Lagertha lead some shieldmaidens across the river was one of the coolest battle sequences in a while. While this too, is unsuccessful, the loss of men and threat of a prolonged siege is enough to make the Parisians willing to negotiate.

Will the Parisians’ bribe be enough to make the Vikings pack it in and go home? We’ll see in the finale, (not at all ominously titled) “The Dead”.