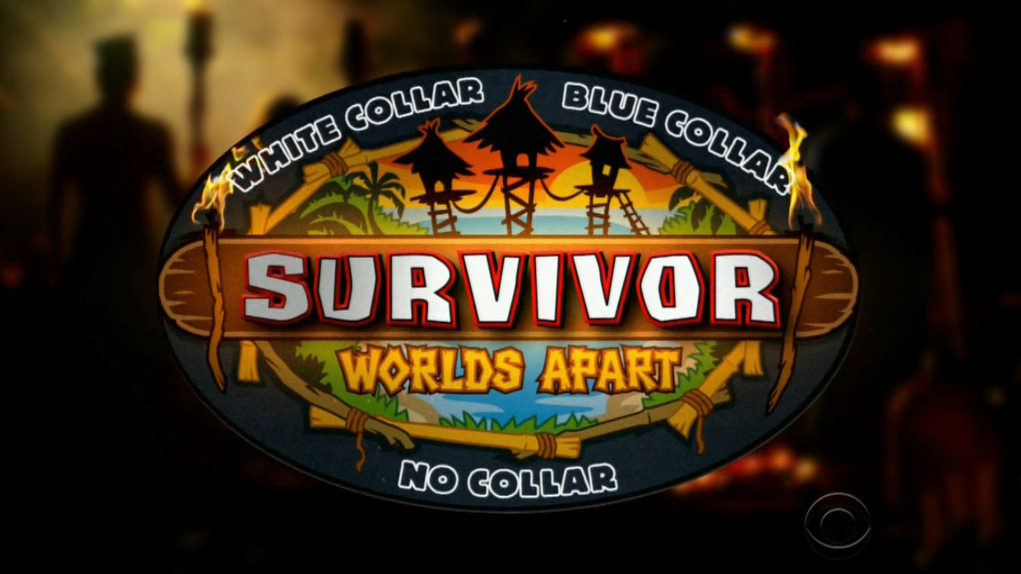 Last season’s Survivor left me with a bitter taste in my mouth. Sure, my favorite Natalie was one of the most deserving winners, but the rest of the cast was awful and all of the likeable power players were booted early on. Luckily, Jeff Probst has gone on record to stay that World’s Apart has one of the best casts and he thinks the audience will love it. Even luckier for us, he seems to be right…so far.

If the premiere is any indication, not only is the World’s Apart cast filled with interesting people but the ridiculous theme of white collar vs. blue collar vs. no collar might actually work. From the beginning, you could see pride among each player as they owned their own allegiance to their “collar.” You also could see a bit of potential foreshadowing as the White Collars seemed to be labeled the villains. I could easily see any Blue and No Collar folks joining together post merge.

This is going to be hugely stereotypical of me to say but you can also already see a difference in game play between the three tribes. The White Collar group is the most strategic. They are already playing the game eight moves ahead. Joaquin was the first to demonstrate this when he and So were given the option of “Deceit” or “Honesty” and had to choose between giving a big bag of beans to their tribe or a small bag and receiving clues to the idol. Joaquin barely even let So decide, when he essentially told her “you know you want to deceive so let’s do it.” It was a good move but sadly they couldn’t lie well enough to convince their smart tribemates (still important to note they were the only tribe to choose deceit). White collar will certainly be outwitting. Over on the Blue Collar side, it was already about strength and physicality. They argued over the building of the shelter when Dan was being controlling and a bit rude. They argued like city folk and weren’t afraid to laugh at each other’s dumb remarks (a highlight was Lindsey and Sierra flat out laughing in Dan’s face when he patronized them…these are blue collar girls Dan, don’t try to alpha-male them). These are clearly the outplay type who will need to focus on strength and gameplay to win. Over on the No Collar side all the drama was around potential alliances when Vince bonded with Jenn early on and then felt betrayed by her connection with Joe. These are your hippies and there is no doubt about it. They will outlast entirely because of their social games (or, likely in Vince’s case, leave early because of said social games). Regardless of how it plays out, I’m actually a lot more interested in this collar theme than I thought I would be.

In terms of the actual players, I find myself liking the white collar team the most. I hate to admit this, but I would fall in the same category and the entire time I watched them play, I kept thinking “these are my people.” If they can get their act together, this team has some serious players. In fact, the only one I don’t like is Shirin because she did nothing other than befriend Carolyn. Speaking of, Carolyn is almost my favorite. She was the one who knew Joaquin and So had an immunity clue so she watched them until she had an idea where the idol could be. Then using her prior knowledge of the game (which everyone does at this point) she quickly found the idol. Carolyn also created a quick alliance with Shirin and Max and was a key player in convincing her team to vote out So. Somehow the oldest lady in the tribe convinced everyone to oust the youngest, and arguably most athletic player, but So was a threat to her and Carolyn worked her magic. I also loved that Carolyn called her out during tribal and was a bit dramatic. The reason she’s only almost my favorite player is because she revealed her possession of the idol already, and that was solely because she thought she needed to in order to stay longer…which wasn’t true. Also, Carolyn kept going on and on about how “of course a girl is going to leave” which annoyed me too. She basically gave herself a 33% change of leaving by assuming the guys needed and would stay. Max and Tyler did not do much this episode either but they made the correct voting decision and for that I like them. I also really like Joaquin. He seems like an aggressive player and somewhat to watch out for. I kind of hope his allegiance to So is quickly forgotten so he can be a real power player.

Over on the No Collar tribe, the only three who got much air time were Jenn, Vince, and Joe. Vince is this season’s crazy person (think Couch and Phillip’s love child). He quickly became infatuated with Jenn and then quickly had a serious relationship chat with her after seeing her become too friendly with Joe. It was all a bit too much too soon. Meanwhile, Jenn handled the whole situation really well by feigning allegiance to Vince only and talking about how weird he was during her one on one interviews. Joe started to take a bit of a leadership role without actually trying. He built the fire for his team and also bonded with Jenn, but not in a creepy way. I think in this tribe Jenn and Joe are the two who will go furthest.

The Blue Collar tribe is the one I’m least excited about. Lindsey and Sierra both have a bit of potential and this is strictly because they were sassy with old, rude Dan. I also find something about Rodney appealing. It might be that he could be much smarter than his tattoos and muscles would lead you to believe, or it could be the Boston association. Either way, those three are my favorites on the blue collar tribe. I do also like Mike as he seems to be playing a good social game, but I’m afraid he’s too close with Dan right now. Dan is my least favorite. Someone needs to tell him that as an older man he will be ostracized already so he really needs to be nice and not talk down to people.

Overall, a solid premiere as we met some great players and saw a strategic move to oust a power player early on. In any other season So could have made it far, but that White Collar team is smart. If they can win a few immunities and overcome the stigma of being white collars, I think we could have a winner in that group.