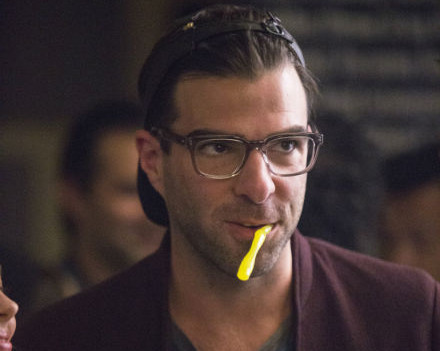 Girls: Ask Me My Name

In Girls’ “Ask Me My Name,” Hannah is getting into her life as a substitute teacher and immediately hits it off with another teacher named Fran. He asks Hannah on a date and it goes pretty well until Hannah suggests they go to an art show she knows will be terrible. Seriously. Can Hannah just have a nice date with a guy named Fran?

The only one who isn’t uncomfortable? Mimi-Rose Howard, who suggests she and Hannah share a cab to the after party while Adam shares one with her ex-partner Ace played by Zachary Quinto. Let’s just get this out of the way. Zachary Quinto was amazing. I could not get enough of him and his ridiculous toothbrush. It was perfect.

Adam, however, did not think Ace was quite as awesome as I did, especially after Ace told Adam that Mimi-Rose was manipulative and was all an act and then jokingly but not jokingly told Adam that he’s going to get Mimi-Rose back.

Adam told Jessa about his conversation with Ace, and it turns out that she only set Adam and Mimi-Rose up so that she could be with Ace. She’s not too worried, though. She’ll be pregnant with his twins by May.

Hannah and Mimi-Rose, however, had quite the adventure. At first, it was super passive-aggressive and awkward. Their cab even hit an old woman with a walker thanks to Hannah.

Finally, Hannah and Mimi-Rose had a real heart-to-heart about everything from Mimi-Rose’s art, to Hannah not making it as a writer, to, yes, Adam and how Mimi-Rose stole him.

By the end of “Ask Me My Name,” Hannah went up to Adam and told him that she actually liked Mimi-Rose and that she gets it now. She left the party and went to get food. She tried to be more like Mimi-Rose, introducing herself to the guy behind the counter. Unfortunately, that kind of thing only works for people like Mimi-Rose.