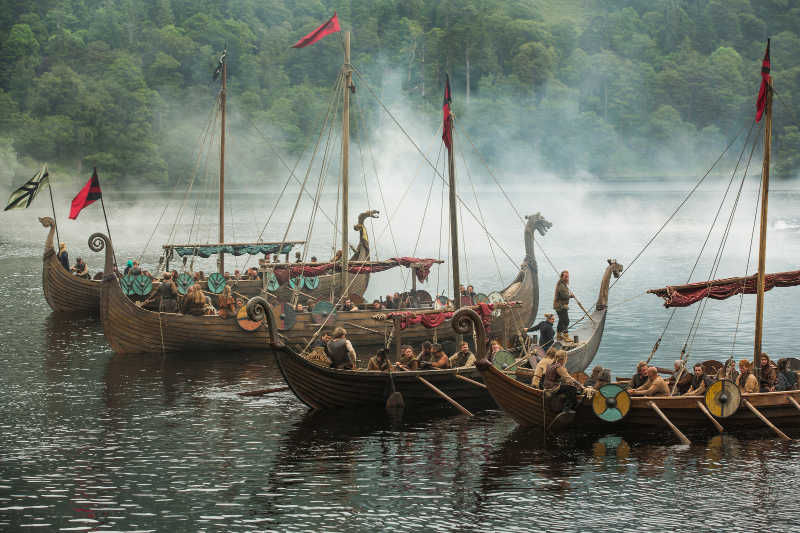 Vikings is leading up to something big. In the third season premiere, ‘Mercenary’, there was a palatable sense of something new and epic looming in the distance. In the episode, Ragnar and his men fight for the Mercian princess Kwenthrith. His men are confused why they should fight for a foreign princess in a battle they have no interest in and Ragnar impatiently explains it’s part of something bigger. ‘Mercenary’ is clearly leading up to something bigger. But just because ‘Mercenary’ is an appetizer doesn’t mean it wasn’t an interesting episode in its own right, despite a few stumbles. (Some spoilers ahead).

The biggest problem with Vikings over all is that as compelling as its protagonists are, the antagonists tend to be a bit repetitive. Since literally the first episode, Ragnar was established as an intelligent man and a visionary. So while his enemies may have more might and might knock him down for a little bit, it was always a matter of if, not when Ragnar would take them down. His most worthy adversary was King Ecbert (Linus Roache) because he had the brains and ambition to match Ragnar. But he and Ragnar are now allies (for the time being), with the two of them and Lagertha sharing an objective for their people to live together peacefully.

‘Mercenary’ introduced some new antagonists, but they all fall back into the same pattern of just not being that smart. Kwenthrith’s brother and uncle had forces to outnumber the Vikings. They then split the forces in half and put them on opposite sides of a river, with no easy way to travel between the two sides. Then they were completely baffled and shocked when Ragnar had his men attack one side of the river at a time. “Why are they just attacking my uncle?” Because they’re not idiots.

Kalf is slightly more promising. Introduced as Lagertha’s trusted second-in-command, he stayed behind to watch her land while she went raiding. Kalf has other plans and quickly betrays Lagertha, scheming to get power for himself. As a bad guy, so far so good. But Kalf ruins it, by scoffing at Lagertha and Ragnar’s dream of farming in England. He’d rather have glory and battle. Of course this seems to be typical Viking thought-pattern, but that’s the problem. It’s typical. Kalf may have the upper-hand for now, but he lacks the vision and creativity of the Lothbrok family. Farming in an easier, more fertile environment for a peaceful, prosperous future? Lame. Trying to farm in frigid Scandinavia and dying a violent death? That’s more Kalf’s speed. There’s time for Kalf to prove himself as a truly threatening villain, but for now, he lacks the edge to make him a true challenge.

The bad guys aren’t the only ones making terrible choices. Bjorn’s girlfriend Porunn is itching to fight and raid. Bjorn, thinking Porunn might be pregnant keeps telling he to stay behind. But as soon as Porunn confirms she is pregnant, they just smile at each other, and get ready to fight. What? This woman has never actually been in a real battle before. And she’s pregnant. Bjorn is usually a voice of reason, but he completely drops the ball here, and it’s weird.

Despite these criticisms, the first episode was very entertaining. The battle sequence when it finally happened was impeccable as always. And the alliance and tentative peace between Ragnar and Ecbert was fascinating, though probably fleeting. The exchanges between the Vikings and the English have always been one of the show’s strengths. A lot of that burden in the past has fallen to George Blagden’s Athelstan, the former priest turned Viking. He is still very much front and center of the conflict, with his continued inner turmoil. He’s also trusted by both Ragnar and Ecbert and serves as a translator and intermediary.

While Ragnar and Ecbert seek ways to coexist, not everyone shares their curiosity or appreciation for anything new, and there is grumbling in the ranks. The Christianity vs paganism battle has been simmering, and this might be the season Vikings finally cashes in on the groundwork it laid for the past two years and escalates skirmishes into an explosion of conflict.

Ragnar has embarked on Athelstan’s same journey of religious conflict, though in reverse. It’s causing Ragnar’s most trusted and loyal friend, Floki to resent him. This potential conflict has limitless possibilities on how to push Ragnar in ways his external enemies never could. Inner turmoil, and trouble in his inner circle could be his undoing. His emotional ties have been a weakness since the beginning of the show.

Vikings is a big show that is about to get even bigger, but it’s at its most effective when it incorporates these smaller, more personal struggles into the fold. What’s exciting about this season isn’t just the planned expansion of the show universe, with the Vikings raiding Paris, with bigger sieges and battle sequences being teased. (Although that is pretty exciting). There’s also the promise of deeper emotional and intercultural struggles – factors that make these larger than life characters compelling in the first place. It’s reassuring that the show doesn’t seem to be abandoning one of these factors in favor of the other. It looks like the audience (unlike Ragnar) is going to be able to enjoy the best of two worlds.