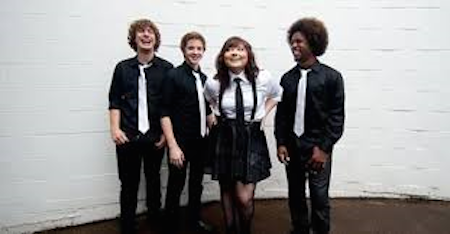 Dallas, Texas, the land of cowboys, outlaws and an elite football team also lets not leave out the cheerleaders. But this lone star state has a lot more to offer in the way of entertainment and it starts with its youth. In 2009 a group of young musicians came together to develop a unique sound by blending each other’s musical taste. At first they called themselves “Jaci And Those Guys” but it did not go over to well when crowds would mistake them for a solo act. Hence, they altered the name and came up with their current stage name “Jagged Row”.

Jaci Butler is the lead singer whose voice echoes with a touch of Blondie and Chrissie Hyde. The band is full of energy with every strum of the guitar and every beat of the drum. They even tagged their music as “jagged rock”. They have been putting out music since 2009 and are bent on making more inroads with every beat they make. Jaci for one was twelve years old when she filled the shoes of lead singer and the rest of the band was between the ages of fifteen and sixteen. They released their first album in 2009 entitled “Storm of Dreams”.

It was merely a taste before they really amped it up with their second release “Night & Day” not long after. The band would begin performing at various venues and make their presence known. They won many “Battle of the Bands” one of which the prize was scholarships to the Berklee five week program.

“Back in 2010, we won the first ever Berklee Battle of the Bands and won a $25,000 scholarship to their Five-Week Program. It was a once in a lifetime experience and we all learned so much and made life-time friends. Plus, we lived in a small one-bathroom apartment together for 2 months- so we really got to know each other maybe better than we wanted to!”

Jagged Row has performed at such venues like The Wildflower Festival, House of Blues, Whisky A Go Go, Real Texas Festival, Tree’s, NAMM, Texas Motor Speedway, State Fair of Texas, etc. They also shared the stage with bands like Hanson, Bowling for Soup & Finger Eleven to name a few.

As we mentioned earlier each member brought with them their own favorite style of music into the mix. Jaci was influenced by the likes of Bon Jovi, Michael Jackson to John Denver. Their lead guitarist Matt tends to sway towards classic bands like Styx and Foreigner. While drummer Josh is more into jazz fusion and rhythm guitarist Landon is drawn to modern acts like Relient K and Skillet. Even though their musical tastes may vary their combination packs a powerful punch.

The band has taken the stage across the US from LA to New York. Yet they have found there is nothing like playing at home. Their favorite locale to perform to date is at the State Fair of Texas on the Chevy Main Stage. They have performed their four years in a row and it seems to get better every year.

Recently, the band performed in NYC at Toshi’s Living Room to a packed audience and totally brought the house down. On their return to Texas they went back to work on their much anticipated EP coming out in March 2015.

“We have a new six-song EP coming out this Spring! We are so excited for this EP, because 1, it’s our first release in 2 years, and 2, we feel like this is the best representation of what we’ve always wanted our music to be. We feel like this is the best material we’ve ever put out and can’t wait to see what our fans think of it. We really let our emotions come out with these songs and they’re definitely the most personal material we’ve ever put out.”

They are also planning another tour hitting various locations across North America and into Canada. The tour will be a showcase for Utopia Artist’s Dream Night Talent Search. Aside from the Talent Search they will also do several hometown shows as well. On top of all this “Jagged Row” is planning to release a music video and several new merchandise items on their website (http://jaggedrow.com/). Dallas, Texas has a new act to follow along the “Jagged Row”.