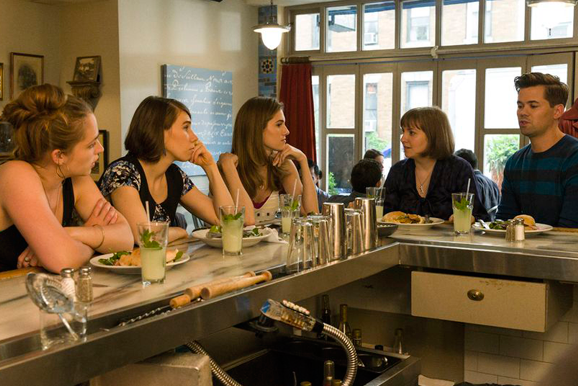 I’m sorry. I just can’t see Hannah as a teacher. Girls’ “Close Up” saw Hannah floundering now that she’s back in New York and without Adam. Elijah came back from Iowa too, having done all he could there, and is living with Hannah and eating all her cereal.

Ray, meanwhile, is also evolving in his professional life. He went to an unsuccessful and hilarious board meeting. He wanted to air his grievances, even bringing a diorama, but the board wanted to end early for the day. He confronted them and it all dissolved. By the end, Ray had decided to run for the board, which I am so excited about.

Shoshonna, meanwhile, had yet another unsuccessful job interview. She ripped the business apart and clearly hated being there. But in the end, she and the boss decided to go out.

Marnie and Desi are having their own problems. They started out hilariously having sex to their own music before arguing over who was writing more songs, whose songs were better, and what kind of band they really were. Marnie ended up questioning the whole relationship she had wanted so badly and had been so happy about just last week.

But Adam had the most interesting storyline in “Close Up.” Things seemed perfect with Mimi Rose until she told him that she had an abortion. Adam was furious that Mimi Rose hadn’t told him about it, eventually deciding to leave the relationship because he felt like she didn’t need him.

Mimi Rose said he was right, she didn’t need him, but she loved the way he took care of her in the mornings and pretended to be asleep so he could do it. They ended up staying together.

I thought the whole storyline between Adam and Mimi Rose was really interesting. Did Adam have a right to be so upset? Should Mimi Rose have told him about the abortion?

And do you have to be needed in a relationship? A lot of it went back to what Caroline hilariously said to Hannah. Adam wants to be needed and likes taking care of people, which, in Caroline’s opinion, is what made Hannah so good for him. Mimi Rose is very independent. Will Adam be able to be in a relationship where he isn’t needed?