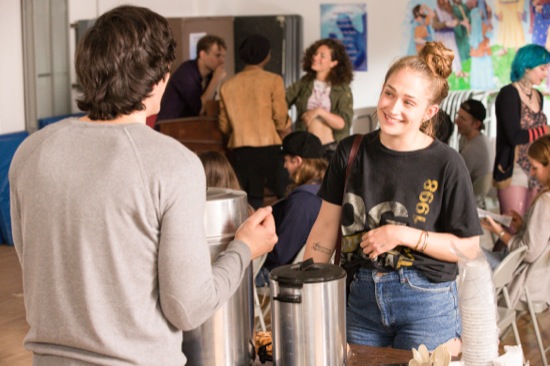 The first two episodes of season 4 of Girls set up Hannah going away to Iowa. Now in the third episode, “Female Author,” we really got to check in on where everyone is. And Hannah and the others had to learn some pretty hard lessons this week. I know that while promoting the fourth season, they said that the girls would be growing up and making better choices. Has that started to happen yet?

Let’s start with Shoshanna. Shoshanna finally graduated from college. During the premiere, we got to meet her parents, which was hilarious. During “Female Author,” she was finally out in the real world on a job interview. It looked like she nailed it until she admitted that this was just a trial interview for her so she could so how’d she do for the job she really wanted. It was cringe-worthy.

Marnie, meanwhile, finally realized that she was Desi’s mistress after talking to Ray. She and Desi had a big meeting for their music and it went well until the interviewers asked about their relationship. Things got awkward real fast and Marnie admitted that she was unhappy. She wanted him to leave Clementine for her, but it doesn’t look like that’s happening anytime soon.

Hannah had talked to Jessa about Adam, and it looks like Hannah and Adam aren’t talking too much anymore. Jessa and Adam, though, had become really close thanks to their AA meetings. After a meeting, Jessa and Adam ended up getting arrested because Jessa pissed in the street and Adam defended her. After Ray got them out of jail, they really had it out. Adam called Jessa manipulative and said he didn’t want to be her friend anymore. And we finally got to see a moment that I would characterize as growing up. Jessa admitted that she needed Adam as her friend.

Hannah hasn’t exactly been doing to well in Iowa either. While it’s not surprising, nearly every single one of her scenes in grad school has been cringe-worthy for me. Hannah’s been really insecure. She’s had trouble making friends and her work was really criticized. Hannah’s struggles in grad school can be pretty relatable at times. Everyone feels insecure and questions things. But she does take things to a whole new level.

And she didn’t help matters during “Female Author”. After talking to Elijah, who had shown up in Iowa last week, about how she was putting her writing off, she went around the room and just slammed every single person in her class during a party. It was horrible to watch.

She ended up leaving the party with a Mennonite. As they rode away, he put her arm around her. It was the perfect ending to the episode.