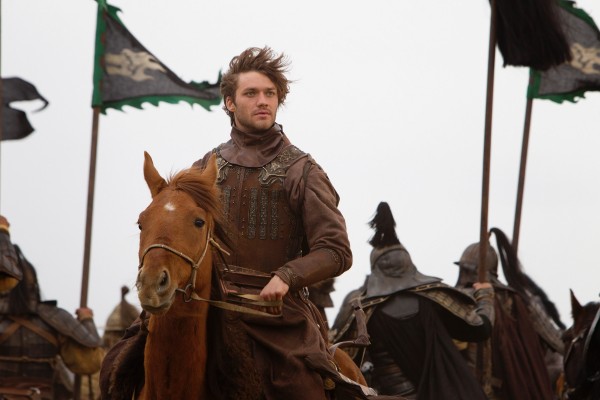 Why Marco Polo isn’t the new Game of Thrones

At one point during the pilot episode of Netflix’s newest series, Marco Polo, Marco’s father shares a nugget of wisdom. Niccolò Polo, a seasoned merchant and traveler, tells Marco the key to surviving long journeys is knowing where home is, and knowing that you can always go back. Marco Polo should take a bit of its own advice. While beautiful and promising, the series suffers by not having a clear emotional anchor. More seriously, it suffers from a condition I’m going to call, “Game of Thrones Imitation Syndrome”.

What is GTIS? It is caused equally by the creative powers that be behind period dramas and by the media coverage surrounding them. Basically, if there is a fantasy series, or a period TV show that is set before, let’s say the 1600 or 1700’s, inevitably, someone will draw a comparison to Game of Thrones. (As you can see I am now guilty of perpetuating the cycle). It’s tempting to make the comparison. Game of Thrones arguably revitalized people’s interest in medievalesque costume dramas, making the past or fantasy worlds suddenly much more real and raw. And so any time one of these costume dramas is greenlit, the show either actively tries to emulate Game of Thrones, or a critic will draw a parallel. Before watching Marco Polo, almost every single article I saw announcing the premiere date called it, “Netflix’s Game of Thrones”.

The problem with everyone trying to make their Game of Thrones is they don’t understand why HBO’s hit is so popular. Sure, audiences love the fight scenes and gorgeous world building, and those are important to the show’s success. But people aren’t not just tuning in because of the sex and violence. Okay. Some people probably are. I would argue most people tune in because they care a lot about the characters. The Red Wedding in Season 3 of Game of Thrones caused the internet to freak out partially because it was shocking, but also because people were really invested in House Stark. Westeros is a beautifully imagined world, but without its fascinating complicated characters, it would be a hollow one. In trying so hard to be the new Game of Thrones, a lot of costume dramas, including Marco Polo miss this crucial point.

Marco Polo certainly tries to hit the emotional spots, but it doesn’t go far enough. Niccolò meets his son Marco for the first time when Marco is an adult. Marco insists on travelling with his father, despite Niccolò’s objections. But over the course of their travels from Venice to the court of Kublai Khan, father and son bond, only for Niccolò to promptly dump Marco in Kublai’s care- a trade. His son for access to the Silk Road. The years the Polos travelled together were covered over the course of a few scenes, and from that, it’s difficult to discern the legitimacy and strength of Niccolò and Marco’s bond. There was affection, probably, but did Niccolò decide his business was more important than his son, or did he have some other information that played into his decision to leave him behind? It’s not clear.

Marco resists his new life in the Mongolian court and is told by one of his tutors, Hundred Eyes to ‘let him [Niccolò] go’. The question of whether or not Marco should let his father and his old life behind is one the pilot doesn’t answer. Is Niccolò/Venice a compass for Marco- the home he can always return to? Or is Hundred Eyes right, and Marco is clinging to a father who doesn’t love him and a life he never wanted? Will his attachment to his past ground Marco, or is it getting in the way of his character growth? History tells us Marco returns to Italy, but right now, the emotional arc the show is supposed to take us on is muddled. This makes it hard to root for Marco- how can you get behind someone when you don’t know where they’re trying to go or why?

Arguably, the emotional crux of the show could fall to someone else. This could be a show where the main character is purposefully ambiguous if the other characters pick up some of the weight. But they don’t. Other than Marco, the character featured the most is Kublai Khan, who is presented as intimidating, ruthless, and unpredictable. At least his motivation is clear – power. It’s a classic motivator, but it isn’t until the end of the episode that there appears to be any strong threat towards his seemingly unstoppable empire. There are other characters in the refreshingly diverse cast, such as the aforementioned Hundred Eyes, the players in Khan’s court and the enemy Song dynasty court, but they aren’t given a chance to do much else other than scheme and side-eye each other. (So much scheming and side-eyeing at the Song court. Kublai Khan could probably wait a few months and just let them tear themselves apart from the inside and not bother with attacking them).

Perhaps now that Marco is on position at the Mongolian court, and the show doesn’t feel the need to cram in several years of backstory, it can slow down and explore a little bit more of what makes the main characters tick. If it’s still short on time, it could always cut a random nude scene or two. (There was one at the end of the episode where in order to test Marco’s loyalty, Kublai Khan brought him to a brothel and told him to look, but not touch. Was there a point to that scene other than to show a bunch of naked people? Not especially).

There are still nine episodes in which Marco Polo can explore what drives it and its characters. The show’s sets and costumes are exquisite, and the political drama and intrigue it offers are promising. The world Marco Polo showcases is undeniably impressive. It just needs to give the inhabitants of this world the same amount of care and depth for the audience to want to stay in it.