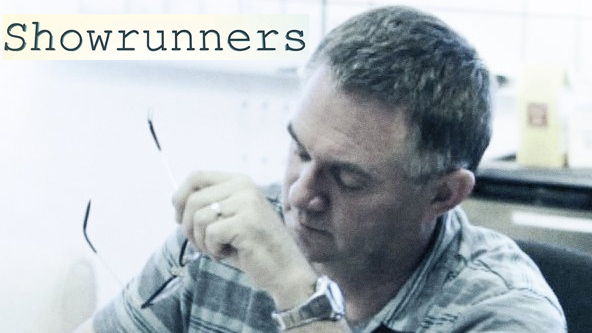 The straightforward documentary Showrunners: The Art of Running a TV Show isn’t great because of its execution (the structure is too formulaic and some of the main shows discussed just aren’t that good) but it’s really great because of its subjects. Showrunners (meaning the Executive Producers in charge of “running” a TV show; usually the creators) are inherently fascinating, I think- writers (an introverted, creative profession) tasked with producing/managing (an extroverted, practical profession), they are walking juxtapositions doing the job of at least 4 people at once.

I would definitely have replaced a few of the boring featured showrunners with more interesting alternatives (why no Jason Katims? His low-fi, 3-camera approach to drama is wholly unique; much as I can’t stand him, Ryan Murphy would have been an ace addition) but director Des Doyle does get in the really key players like Joss Whedon and JJ Abrams and I’ll just say it’s really nice to hear Joss talking about Buffy and Firefly again after years steeped in Marvel-dom. These are guys who went on to helm some of the biggest film franchises in the world, but they’re TV guys at heart who came up writing 22-episode seasons, building universes instead of adapting them.

My unexpected favourites were Chris Downey & John Rogers from Leverage (a show I never watched, but now I might). One of the things I love about Joss is his desire to be, as he puts it “a company man” and his ability to adapt to restraints, whether they be FCC or otherwise. Downey & Rogers captured that spirit and approached making their show with a really refreshing grateful attitude : “we go to a bunch of people and ask them to give us a couple million bucks a week to tell our little pretend-y stories. The idea that they should do that with no strings attached is madness”.

Beyond the sheer fun of candid wit from great minds and the inside-baseball of the industry, Showrunners has some genuinely amazing moments when the creators reflect on the creative process- when Janet Tamaro talks about how she memorializes her late best friend through her show (Rizzoli & Isles), J.H.Wyman’s heartbreaking farewell to a show (Fringe) he called “an excellent communication device” (a more insightful comment about the introvert as creator I’ve never heard) and, most memorably, Ronald D. Moore’s tale of literally killing his idol as the Star Trek fan who grew up to write Captain Kirk’s death scene. If you love TV, Showrunners is just about the best film there is.