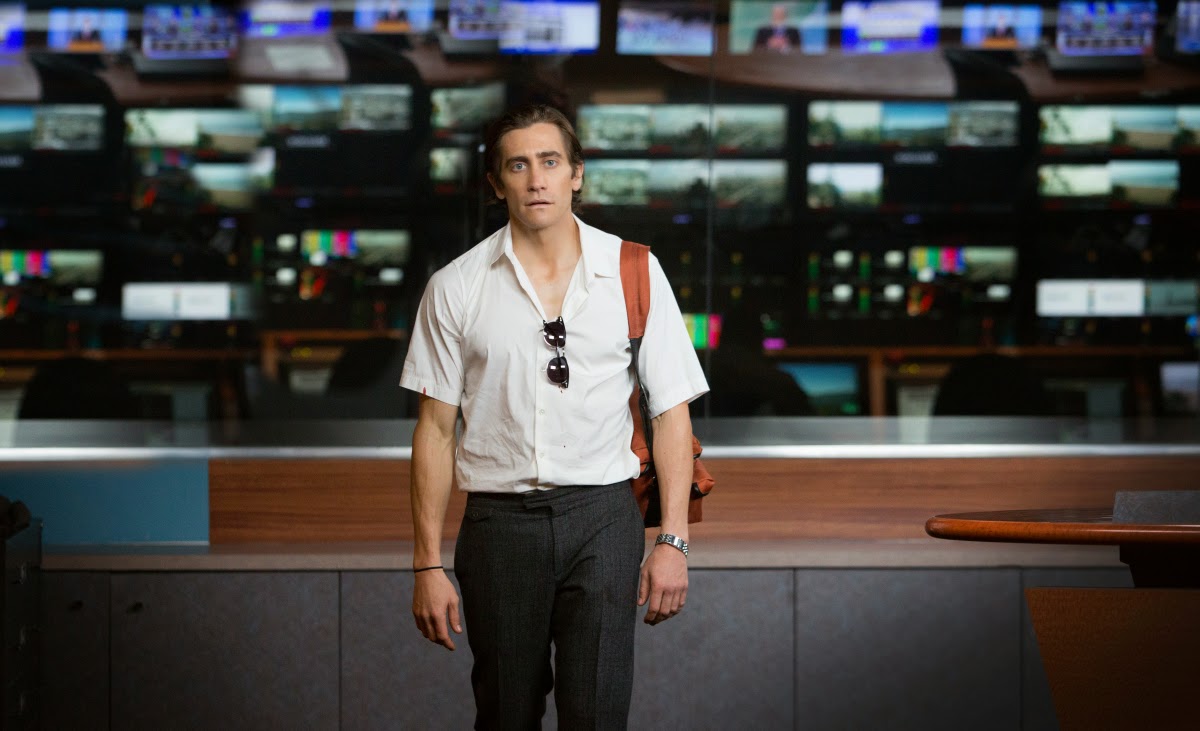 Part Taxi Driver, Part American Psycho, entirely a biting satire of the modern entertainment complex. Nightcrawler may sound like an X-Men spin off but it’s actually a fascinating spin down the rabbit hole of our modern news landscape, and an interesting twist on the antihero genre.

I don’t want to spoil the journey I went on with Nightcrawler, so I’m just going to go ahead and tag the rest of this with a spoiler warning. If you’re at all interested in the above description, go see Nightcrawler, and then come back here and we can talk about it. It’s okay, I’ll wait.

Nightcrawler tells the story of Lou Bloom. We first see him stealing pieces of a fence for profit and beating a security guard who gets in his way– no explanations are given as to how this man ended up stealing scrap metal for a living. No family is hinted at. No friends. Bloom’s final decision to latch onto the “filming tragedies for money” business could be called accidental if it weren’t for the hunger with which he trolls the street. He’s like a junkie looking for his next fix. It cant be called accidental when he stumbles upon drugs.

Jake Gyllenhaal gives indisputably the best performance of his career playing the psychopath at the center of the story. I’ve read a lot of reviews calling him “morally ambiguous” or “tortured.” That is wrong, and makes me concerned for the reviewers sanity. Gyllenhaal plays a psychopath by the clinical definition of the world and he manifests as crazy from that first moment of the movie. The thing that changes, of course, is our perception of him, and the way that reflects back the world around him.

Playing up his gaunt frame with clever shadows and slicked back hair, Gyllenhaal displays a madness that could seem like loneliness or eagerness if it weren’t for the callousness of his gaze. A late-in-the-film scene in which Bloom lays out a possible interpretation of his actions (“maybe I just hate people…”) is just a much a lie as the pleasant oddball persona he uses to lure people in. Bloom is a character without empathy or true connection, a collection of id and culturally mandated desires. His bad deeds come without cruelty and without malice, like a crocodile.

I don’t want to overstate the satire, since that tends to make movies like this seem overwrought and pretentious. Nightcrawler is not either of those things. It beats with the twin desires for power and money, but it also moves quickly, pointedly, and contains moments of sheer brilliance.

There are moments when Bloom’s antics border on fun, in a way that I consider the worst of our current cultural obsession with anti-heroes. And the movie never punishes him for his excesses, for his callous indifference to human life, for his ambition and cruelty. But that would be missing the point.

And here is where I have to, unfortunately, unpack the satire – even though I know doing that unpacks half the fun. The movie is primarily a critique of the way the news reinforces what we already think, and the naked ambition that becomes the driving force behind the supposed quest for “truth,” regardless of real world consequences.

If I wanted to get real Film Studies 101, I would say that Bloom is less a character than a manifestation of capitalist drive – a dehumanizing force that makes everyone around him worse for having encountered him. He makes Rene Russo’s News Producer lose her power, subjugated under a system that cares about nothing but the last ratings report. He destroys his partner – a semi-homeless, under educated young man who definitely doesn’t care about the ethics of his new $30 a night internship. And he wins – triumphantly, ridiculously, bloodily- every time, even though his ambition only feeds itself at the cost of everything around him.

Along the way, the movie drops in some fun criticisms of the modern entertainment industry. The repeated use of the word “intern” as a punchline. The discussions of framing. The labeling of the videography company. This is inside baseball satire at its best – cutting and insightful.

It’s also a gripping thriller, a psychological drama, and an occasionally funny morality play. Buoyed by universally amazing performances and a graceful script that knows how to stick a monologue, Nightcrawler was a surprisingly fantastic movie. Even if I never really want to see it again.