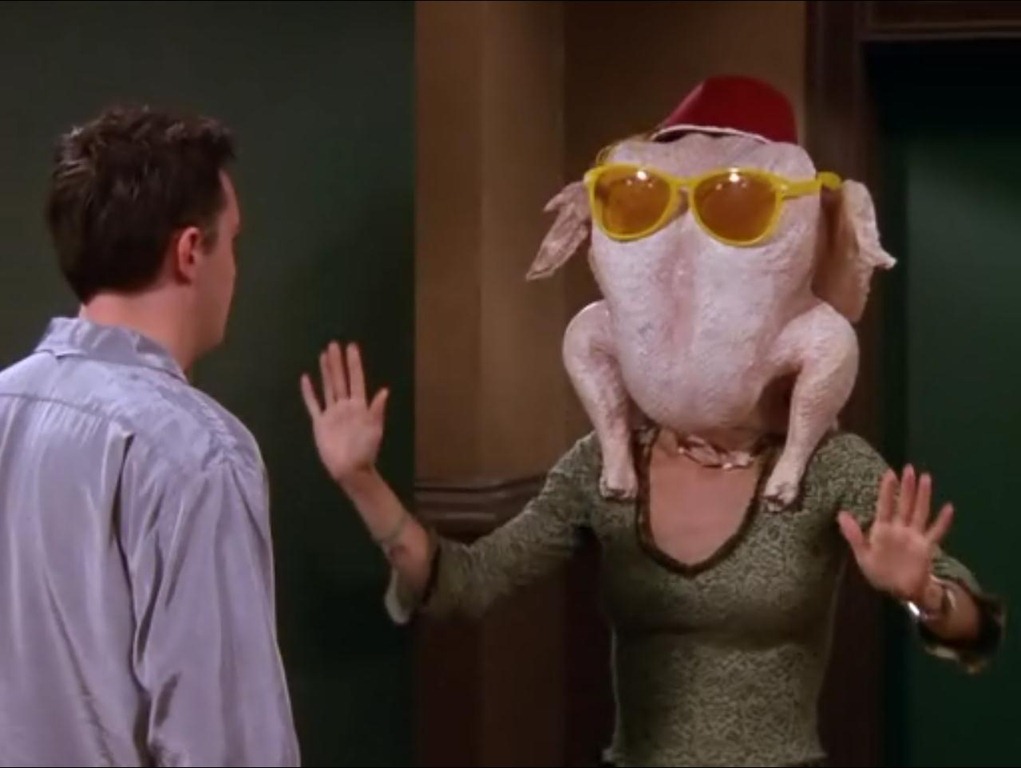 This Thanksgiving, I decided to watch all 9 Thanksgiving episodes of Friends in order to finally determine: “Why does Ross, the largest of the Friends, not simply eat the others [for Thanksgiving]?”*

Here are the lessons I learned:

– The first instalment, The One Where Underdog Gets Away, features one of those “early sitcom family building” episodes where everyone learns that it’s okay to not be with their traditional family for the holidays because they’re building their non traditional family right there. It’s cheesy and familiar, but it’s also the emotional underpinnings of the whole rest of the series.

– The cast really came off the truck in season one with an impressive comedic chemistry.

– Never get in a football battle with Monica when a troll is on the line.

– The sight of a man with a turkey on his head will never NOT be funny.

– You should never call someone fat, because they might be behind you and then cut off your toe. But if you do, you’ll actually cause them to make life altering changes that shape the course of their whole life. And then you’ll find true love. So maybe… do it?

– She plays lacrosse AND field hockey. She plays for BOTH teams. (subtle homophobia was also totally cool in the 1990s)

– Phoebe’s past lives were all as war time nurses. Being a massage therapist seems like a step down, no?

– Also okay in the 90s? Completely unironically making fun of intersex people. Jezebel would have a field day if Friends was on now.

– The door to Monica + Rachel’s apartment is an important plot point in 2 out of 9 episodes.

– While most of the Friends change primarily in predictable and/or hair-cut related ways, Matthew Perry’s weight fluctuation, face puffiness, and general signs of having been an addict mean that he’s the number one best indicator as to what season you are watching. Chandler’s by far most attractive season is Season 10 (which, not coincidentally, seems to be Perry’s most successful rehab stint)

– Ross, in contrast, is BY FAR the least changed Friend.

– A quick ranking of the episodes in quality order:

– The common assertion, that Friends and other long running sitcoms get worse and less inventive as they go along, is DEFINITELY born out by watching these ten episodes back to back. The dip in quality is best characterized by Joey’s line in “The One With the Late Thanksgiving” (season 10): “Thats some gentle comedy, dude.” But those first episodes are alive and vibrant and funny, even years after the format or the set up seemed fresh.

That said, all these episodes reaffirm Friends’ belief in well, Friends as they transform into Family. But if you’re going pure quality, I’d stick to the early episodes. And maybe the one with Brad Pitt.