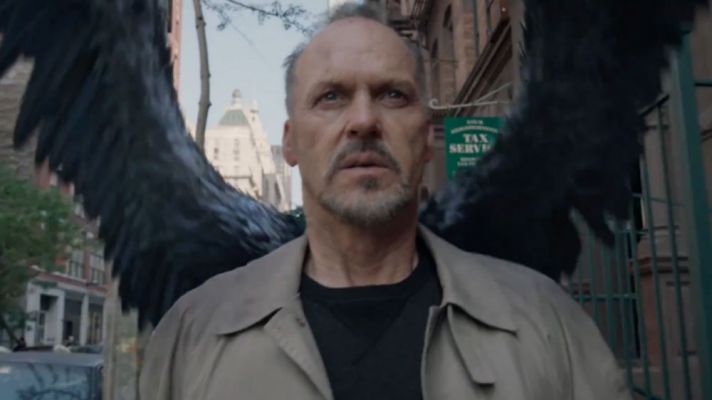 Birdman Or (The Unexpected Virtue of Pretension)

In a lot of ways, Birdman Or (The Unexpected Virtue of Ignorance) is a creatively masturbatory exercise in pretension. It may also be brilliant.

Just look at that damn title! Uselessly subtitled, with inexplicable punctuation. It begs you to take it seriously, while creating just enough of a wink to pretend its better than such serious pretensions.

Birdman focuses on the fractured mind of an aging former movie star, Riggan, striving for relevance against a backdrop filled with online noise. Riggan was famous years ago, in 1992 to be exact, for a series of superhero features called Birdman, but refused a fourth sequal for artistic reasons and now finds himself approaching geriatrification and mostly forgotten. It features some of the most meta casting in recent cinematic history – not only Michael Keaton (the erstwhile Batman) playing an aging former superhero, but also the notoriously difficult method actor Edward Norton playing a ridiculously difficult method actor and Naomi Watts cleverly upending her own movie star reputation and shouting out to her pervious movies. And it is symbolic as hell – a metaphor rich tapestry of allusions and symbolism that threatens to come a part at its narrative seams.

Former movie star Riggan (Michael Keaton) struggles to open his new play, an adaptation of Raymond Carver novel, and reclaim his career. He struggles against the warring factions within his own mind (articulated with a gravely voice and eventually embodied as Birdman, the superhero who once made him famous). He also fights with his co-producer (Galifianakis), his temperamental star (Norton), his ex-wife (a fantastic and appreciably understated Amy Ryan), his current lover, and his daughter (Emma Stone). The show, as they say, goes on, but the mind doesn’t always follow.

Movies about artists made by artists can be self congratulatory, ESPECIALLY when they’re pretending that they’re being self-flagellating. But director Alejandro González Iñárritu manages to keep it all together, and create a movie that feels cohesive and engaging, despite its potentially insular nature. Most of this comes from his strong visual hand, a gift he’s displayed since Amores Perros. The movie’s central visual gimmick is the decision to make it play out like one long shot. This leads to a fantastic upending of expectations, playing on the idea that unbroken takes normally make a film feel like real time. Instead, the unbroken take puts us in the head of our protagonist, who struggles to make sense of time and place, and creates an agreeable sense of confusion. It also mirrors the untrustworthy nature of memory, where all the sleeping and noise and banality of the day slowly seeps out of the memory banks, leaving only the moments of pain or catharsis or humor or inappropriate, underwear-clad wrestling matches.

Past that, the movie makes a lot of its theatrical setting. Given that a lot of the onscreen drama concerns the distinction between real art (theater) and populist trash (cinema), the camera reflects back this dichotomy. The camera pans up on rows of scaffolding, looking like a Broadway set. Our unbroken glimpse into the characters reminds us of the immediacy and emotional intimacy of a play. But the film undercuts these simplistic renderings, giving in to explosions and special effects across the third act that show what exactly makes this a movie, damn it, and replies forcefully about the power of the medium.

A lot will be made of stars Michael Keaton and Edward Norton, but I want to take a moment to shout out Emma Stone. She plays against type here, as the troubled daughter of Keaton’s Riggan. She manages to turn those giant eyes, normally employed to the service of wise-but-naïve aura of the smart teenager, into deep depositories for damage. A potentially predictable pairing between Stone and Norton’s characters feels real and electric due to Stone’s performance and chemistry with her costar. And she creates a wealth of backstory with Keaton without the script ever needing to elaborate on the years of neglect. Her naturally giving persona and charisma makes us side with her despite the heavy application of irony and eyeliner and upper class ennui.

Michael Keaton is fantastic, playing a character that, despite some surface level similarities, never actually feels like Michael Keaton. Despite their similar IMDB pages, Riggan is damaged, self-important, angry and unhinged, and Keaton makes him feel alive and dangerous. In addition to his chemistry with Stone, he and Norton prove an excitingly antagonistic pair, their egos clashing across the stage in ways both big (the aforementioned underwear wrestling) and tiny (the subtle rewriting of a scene). The beauty of this performance comes out most acutely in his limited scenes with Amy Ryan, where years of hope and dreams and pain and doubt and love come flooding out in occasionally painful, occasionally on the nose, always engaging ways.

It’s never an easy job to play an amazing actor, because that just invites criticism, but Norton’s been playing this part since he first got bad heat for his rewrites of American History X. He’s predictably amazing, and I like to think nothing like his character in real life. Mike is a villain, a man prone to casual cruelty just because of his disdain for the world, but he’s also a coward and in pain and every bit as real as the others in this piece. Norton manages to shift our entire understanding of him through his moments with Stone, while also indulging in the worst instincts of the character the rest of the time.

Birdman Or (The Unexpected Virtue of Ignorance) definitely merits a second viewing. It’s a movie that justifies thousands of Film Studies courses – rich and contradictory and flawed. It’s also a movie that’s probably going to get annoying when all of your film school friends wont shut up about it, because there’s nothing more appealing to film school kids than movies about film as an ARTFORM that star the creative person as some sort of misunderstood tragic hero.

But Birdman earns its pretension with beauty and truth, and an unnecessary shot of Michael Keaton racing through time square in his tighty whiteys like the younger version of this dude.