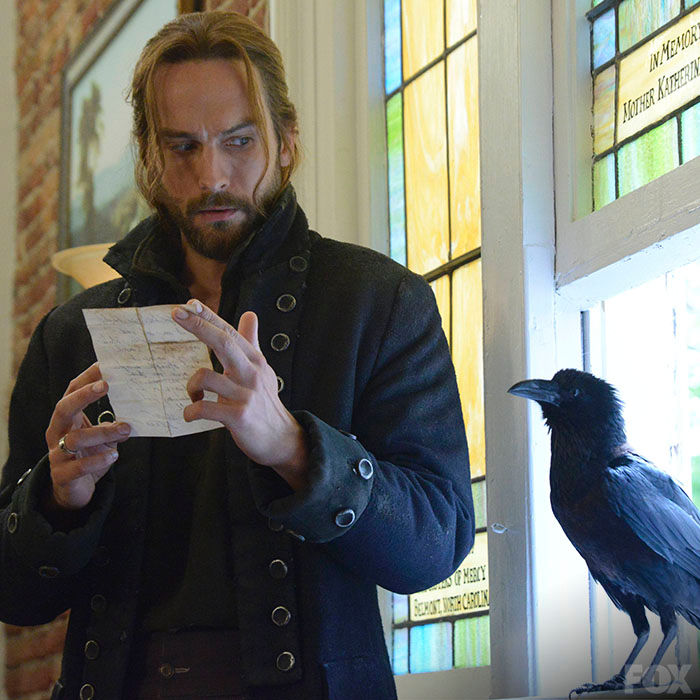 This week’s Sleepy Hollow had a lot of potential to move the story forward, which it unfortunately didn’t take. While the episode was still very entertaining, the show is starting to feel like it’s stalling. (Spoilers ahead).

One of the problems this episode encountered was the death of Caroline, a colonial reenactor, and apparently very good friend of Ichabod. Even though the only other time Caroline appeared was at the end of last season, and very briefly. And the only reason I remember that isn’t because Caroline made a particularly strong impression (we didn’t even get her name that episode). It’s because Laura Spencer who plays Caroline also played Jane in The Lizzie Bennet Diaries. (How dare the show kill Jane Bennet?) So when Crane kept fuming that the titular Weeping Lady kept attacking those closest to him…it felt like a stretch. It’s awful that innocent people were being targeted, but if they’re going to pull the ‘hurting the protagonist’s loved ones’ card, they need to earn it.

Speaking of those closest to Crane…Katrina’s story featured heavily this episode, which is probably why I didn’t like it very much. Katrina is still ‘spying’ on the Headless Horseman. She found a way communicate with Crane despite the heavy security she’s under. She used cunning and magic and got a carrier crow and everything, in order to send Crane a love note. How incredibly useful. Katrina’s entire plan of spying on the Headless Horseman is fairly pointless, since the Horseman is an agent of Molloch, who is a demon, who can see everything. I’m not sure how much Katrina thinks she can find out before she gets caught.

The Horseman is also a ridiculous character. The Headless Horseman, the Horseman of Death is actually Ichabod’s decapitated former bestie, who is madly in love with Katrina. It was a stupid decision last season, and it’s still stupid this season. Katrina and the Horseman’s scenes together are so boring, because we know exactly how they’re going to go. The Horseman of Death is wrapped around Katrina’s little finger, and she is the least interesting character on the show. There was a hint at the end of the episode that she might have a bigger role to play other than love interest/damsel, since apparently she is part of Molloch’s larger plan. Let’s hope so. Right now, Katrina’s only character flaw seems to be she hides stuff from Ichabod because she just loves him so much. For now, she’s back with the Headless Horseman. Their situation continues to take a lot of screen time, but remains at a bit of an impasse.

There are plenty of characters who would be a lot more fun to explore. Hawley, an accumulator of rare artifacts, has a history with Jenny, and it looks like a soft spot for Abbie. He’s a bit of a mercenary, which offends Crane’s sense of honor, and watching the two of them butt heads is always fun. The only danger of Hawley’s character is he might make things too easy. Not only is he a walking encyclopedia of random, mythical knowledge, but he happens to have really rare and useful weapons. Of course he has repeatedly made it clear he’s in the business for the money, and that he won’t risk his life for Abbie and Crane. But there’s probably a redemption arc in there somewhere, and in the meantime, he’s still helped them a lot already. If there isn’t a gigantic redemption arc, he makes a good foil for Crane, and I’m curious to see how he fits into the show as the weeks go on.

This week’s best ‘Ichabod still doesn’t quite get the modern world’ moment: When Ichabod assured Abbie he understood how lover’s lanes work. They had them back in his day…when you held hands with your betrothed…while chaperoned. Yes, Crane. That’s definitely what those teenagers were up to in their car.