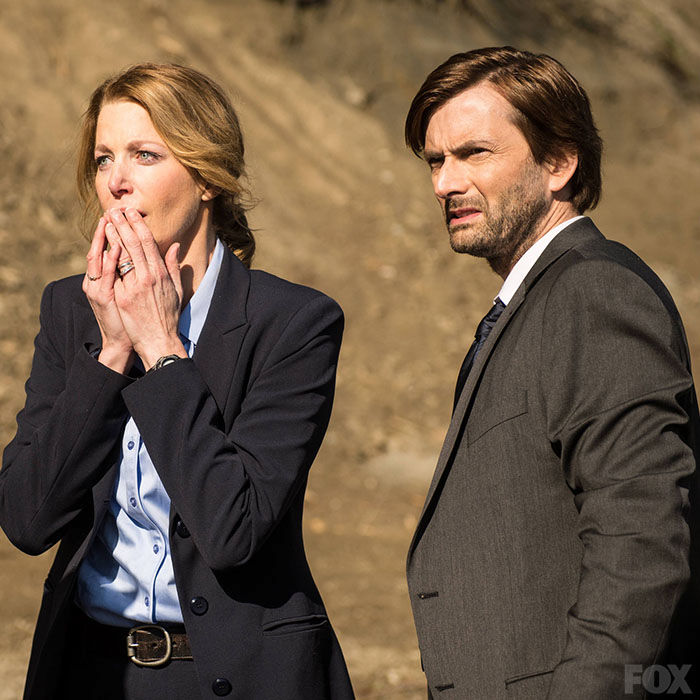 Gracepoint is a gripping examination on how a small town reacts to the tragic murder of a young boy. It’s well written. It features gorgeous scenery. And it has an amazing cast, led by David Tennant and Anna Gunn, and including an impressive ensemble cast. Its biggest problem is it’s a remake of the BBC’s Broadchurch, which came out in just 2013, but aired in the US just this year. If you’ve seen the original, the pilot of the remake won’t hold any surprises.

In a world where hour long procedurals wrap up gruesome murders in an episode, (or maybe two if it’s finale season), Gracepoint is refreshing in how it takes its time solving the murder of Danny Solano. At the end of the first episode, there wasn’t even a solid suspect. Instead, Gracepoint looks at the devastating toll a murder has on a small community.

David Tennant and Anna Gunn star as the two detectives in charge of finding Danny’s killer. Both of them give the solid and nuanced performances audiences have come to expect from actors of their caliber, Tennant’s questionable American accent aside. Their partnership is an odd one, and not in a dysfunctional buddy cop kind of way. Tennant’s Emmet Carver is an outsider. He came in from out of town, got a promotion promised to Gunn’s Ellie Mille. But despite his outsider status, he is the lead on the investigation of a local murder. His mere presence is an agitator, something his surly personality does nothing to alleviate.

Also giving impressive turns are Virginia Kull and Michael Peña as Danny’s grieving parents. Kull had a particularly haunting montage that tracks her from when she frantically realizes her son is missing, to the point when she finds his body on the beach and has to be dragged away. The rest of the ensemble cast is there, but the episode didn’t leave much time to focus on them. A lot of the ensemble consists of actors whose faces you recognize, and once you IMDB stalk them you realize they all have pretty solid resumes. Once the investigation expands more to the town, no one should be concerned the ensemble is going to fumble it.

Gracepoint is a really solid show. But there is still a big question looming over it: should viewers of the original Broadchurch tune in? And my answer is I don’t know. The similarities are striking, especially since David Tennant plays the same character in both. They have different names, but their characterization and role within the show is exactly the same. A lot of the show was exactly the same. It’s been a few months since I’ve seen Broadchurch, so I can’t remember the dialogue verbatim. But scene by scene, shot by shot, a lot of things were almost if not completely identical. That includes the fantastic montage mentioned earlier. There is always the chance they’ll change things as the show progresses. The internet was abuzz with rumors earlier that they might change the murderer, which I have mixed feelings on. It would be nice to be surprised, but Broadchurch’s killer was a brilliant choice.

If you haven’t seen Broadchurch, Gracepoint is definitely worth checking out. If you have seen Broadchurch, and you feel like revisiting the story, Gracepoint really is well made, and could be worth a watch. While I loved Olivia Colman’s portrayal of Ellie in the original series, Anna Gunn is also fantastic in her role so far, and gives a different interpretation of the character. Personally, I wish they had put more time between the two shows, so I could forget some of the details and enjoy the story from a fresh point of view. But since Broadchurch is on now, and it’s really good, I’ll watch it anyway.