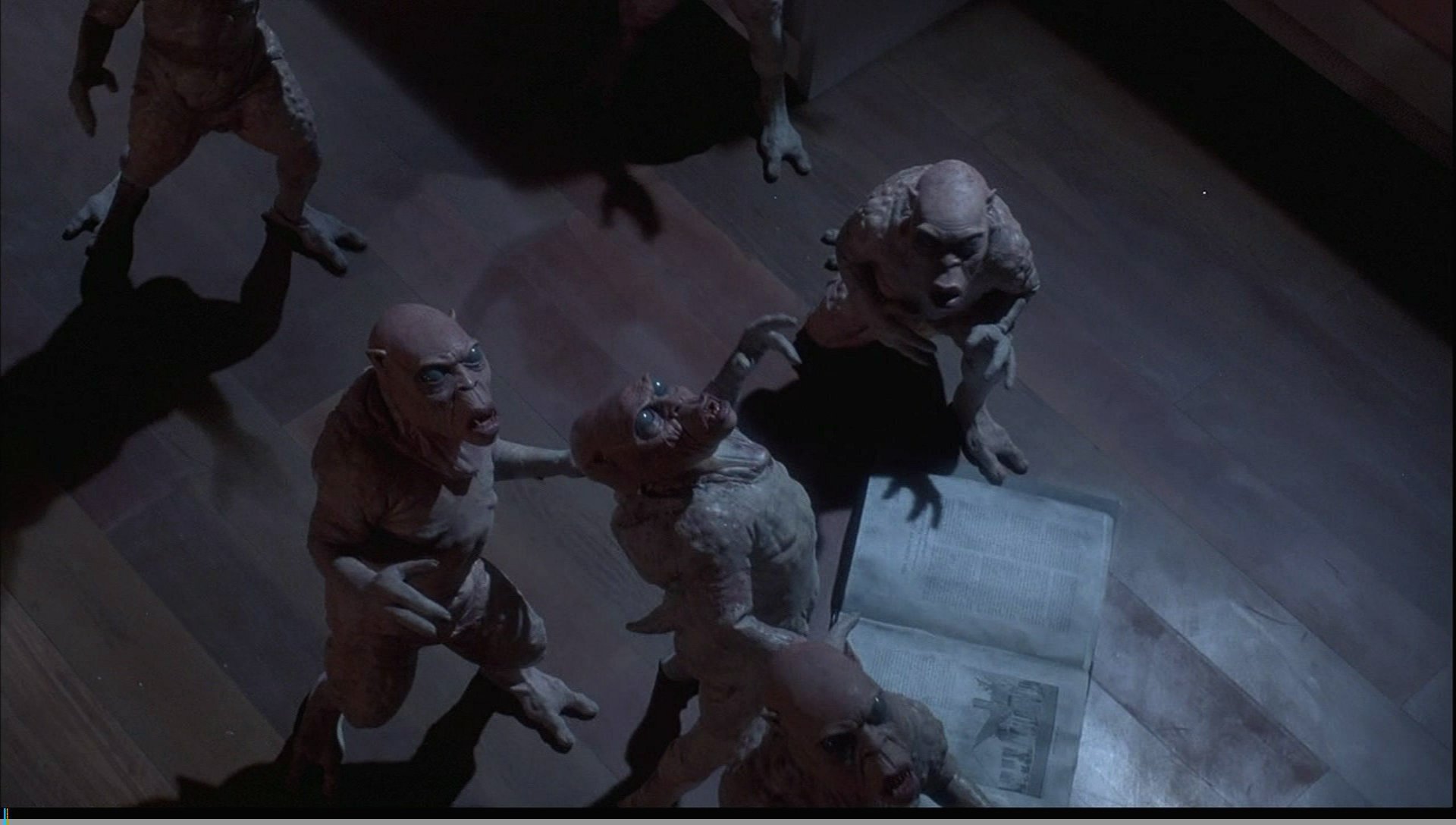 The Gate is officially the first real horror movie that truly terrified me as a child. Beforehand, everything I would’ve seen were kid-friendly nightmares like Are You Afraid of the Dark and Goosebumps. The Gate is a fitting crossover movie because, while being a horror film built for a slightly older audience (it carried a PG-13 rating), the main protagonists are much younger and more easily-relatable to the kids who snuck a viewing.

Off the start, The Gate does not really seem like it has anything to offer a real horror fan. The PG-13 warning is a bit of a red flag for a scary movie that came out of an age of gore and excess. Also, it opens a little slow, with gimmicky non-scares like a kid accidentally floating and a boy tricked into thinking the family dog is his dead mother. This is accompanied by some especially terrible stilted acting. By the 20-minute mark, most are probably expecting a so-bad-it’s-good movie, at best.

But here’s where things turn grim. Our main protagonist Glen (a very young Stephen Dorff) becomes very suspicious of the hole that has appeared in his backyard. His suspicions are thanks to his friend Terry (Louis Tripp) who just so happened to have a record on old dark magic from the mysterious and faraway land of Europe. The record helps to set an exceptionally spooky vibe with it actually bringing the occult into this suburban scenario. Instead of just jumping to the usual scapegoats like devils and demons, it alludes back to the chilling myths of an earth once ruled by dark ancient gods that wish to claim it as theirs again (this same idea would be used again in later classics like Cabin in the Woods).

Shortly after this, a series of mistakes activate “the gate” in the backyard, which turns the kids’ home into a final battleground to save the world. Our heroes finally convince older sister Al (Christa Denton), partially thanks to some angry moths and giant, under-the-bed monster arms, to stop partying with her friends and help them.

From here, the film becomes a visual effects spectacular. The mini-creatures that the kids battle are a great example of stop-motion done well. In addition to these invaders, the entire home of our characters has become possessed itself, and starts to torment their minds with horrifying prank calls and visions of melty parents returning home. In the usual ancient evil tradition, the monsters appear to be more satisfied with just fucking with the kids instead of just getting around to the inevitable sacrificial killing.

The movie has tons of leeway as to what it can utilize as scares, since the power and form of the monsters is so vague. This allows the ancient gods to engage in some IT-like monster shape shifting while also turning the house into a carnival of abstract horrors.

Finally, after the creatures get both his friend and his sister, Glen must come face to face with the reincarnated god before it moves on to destroy the world. The god ends up looking like a mixture of Lovecraft and Harryhausen-inspired terror, and manages to pull off a visage of evil and intelligence. It picks Glen up by the hand, and we know for sure that Glen’s done for… but then it just sort of contemplates him kindly and then puts him down and leaves. Well then, maybe this god isn’t so bad. The world will change, but maybe it will be a kind god and… OH MY GOD IT INSTALLED A STARING EYE IN HIS HAND! THAT’S SO WEIRD EVEN THINKING ABOUT WHAT THAT WOULD FEEL LIKE! WHY GOD, WHY WOULD YOU DO THAT! IT SEEMS LIKE SUCH A SENSELESS ACT OF EVIL!

Ok, I feel better now. For Glen, all hope seems lost. But then, thinking back to those he’s lost, he gets mad. Turning into a total badass, he digs the eye out of his hand with a knife. I know if I was in his situation, I would just change my nickname to Blinkfingers and learn to live with the eye-hand. Well, removing the eye really pisses off the old god because it made that eye just for Glen and it feels really under-appreciated when people don’t enjoy its gifts. Then, Glen launches a toy rocket at it and that kills the demon due to some unexplained “just accept it, it’s the 80s” reason. As a result, all the creatures leave, everyone that died comes back, and life returns to normal except for the lingering psychological scars that refuse to heal.

The Gate is an adult horror movie built for kids. As an eight year old, it basically creates the worst of all possible nightmares; it makes it seem like your home sanctuary could transform into a den of evil and horror whenever your parents go away. While it can be pretty cheesy overall, it does seem to take some off-balance shifts into the demented whenever it starts expositing about demonology. On top of that, the incredibly well-done effects nail the scares down and create some truly nightmarish moments (after this movie, I couldn’t put my feet down anywhere near the side of my bed for over a year).

While most modern adventures featuring child protagonists often find their inspiration in classic films like The Goonies and The Monster Squad, The Gate is the movie I often think back to when referring to child-led horror. I think this is the reason this film becomes a lot more than just a throwaway creature feature; it’s not often that horror for kids is actually built to be truly scary, and this is one of the earliest examples of it that I can remember. Later 80s nostalgia-inspired kiddie movies like Monster House and Paranorman appear to have taken a lot of their inspiration from movies like this.

I’d definitely recommend it as a good Halloween movie and is particularly good for those uninitiated with horror, as well as especially brave kids. If you can’t at least find a little value in The Gate then YOU’VE BEEN BAAAAD!