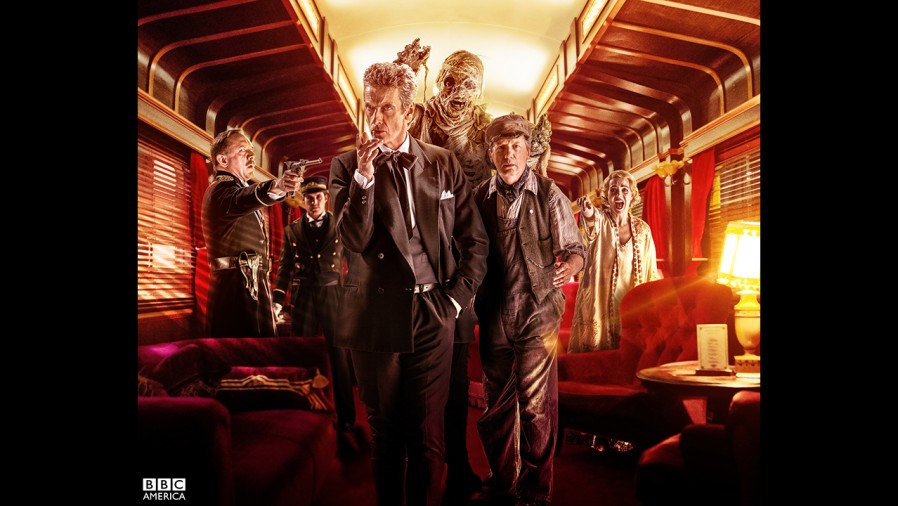 Doctor Who: Mummy on the Orient Express

This week’s Doctor Who was like much of the rest of the season: enjoyable for the duration of the viewing, but not something that sticks with you. There was little substance, but a lot of style. And I mean a lot of style. A replica of the Orient Express – in space! A mummy! 1920’s costumes! It was all good fun, but if you think about it too much, it leaves a bad taste in your mouth. (Light spoilers ahead).

The monster itself was the right blend of mythology and sci-fi to make it interesting. They never got around to revealing who gathered a bunch of people on the train to study the mummy, but perhaps that’s a plot to be solved another day. But within the confines of the episode, it was an effective monster, suitably mysterious and threatening. And while slightly ridiculous, the setting, a strange combination of the 1920’s meets futuristic space lab somehow worked.

This week was meant to be Clara and the Doctor’s last hurrah. Clara was rightfully peeved at the Doctor for how he keeps her in the dark but forces her to make uncomfortable decisions and be his accomplice. And despite the Doctor pulling that same kind of stunt again, Clara decided to stay on travelling with him. The thing is: the Doctor lies. He manipulates people, and sometimes pulls morally questionable moves. The audience knows this. The companions know this. Last week’s episode clearly pushed Clara past her breaking point, so it was good she decided to remove herself from what was becoming a toxic situation.

But then this week, she suddenly changed her mind and decided to stay on. There wasn’t any new information she was presented, so Clara comes off as inconsistent. If she had had enough and that’s why she wanted to leave, good for her. But suddenly changing her mind again when nothing about the Doctor had changed makes her seem a little fickle, which isn’t really consistent with her characterization. Clara has a strong idea of what she thinks is right and what isn’t, and when she stands her ground, that’s Clara at her best. So when the show presents her as wishy-washy, it’s exasperating, because it’s inconsistent, and feels like a disservice to Clara. I’m glad Clara is staying on, because Jenna Coleman and Peter Capaldi have a really great dynamic and play off each other well. It just would have been nice if this side plot were handled a little more gracefully.

Something else that could be handled a little better is also one of my pet peeves of the show. Most of the show’s references to past episodes are to ones that Steven Moffat has written, or shows that have occurred in his era since he took over the show. Doctor Who wreaks havoc on a lot of previously established events or facts on the show, but always has time to reference something Moffat related. The premise of this week’s episode clearly alludes to a line at the end of the Season 5 finale when the Doctor got a phone call regarding an Egyptian goddess loose on the Orient Express in space and said they were on their way. Clearly the Doctor never got around to going to the Orient Express until now, but still, the references still stands. The also Doctor asked the mummy, “Are you my mummy?”, an obvious reference to Season 1’s ‘The Empty Child’ and ‘The Doctor Dances’, which were written by current showrunner, Steven Moffat. I’m all for shows referencing their pasts; they’re nice little winks and nods to the die-hard viewers. But since the majority of these kinds of references are Moffat related, while ignoring a lot of other writers’ works, it feels less like a nod and a wink to fans, and more like a growing cloud of narcissism that threatens to overwhelm the show.

There were a lot of good moments in ‘Mummy on the Orient Express’. The biggest challenge Doctor Who faces is making sure those good moments don’t get lost in flashy plots and patting itself on the back.