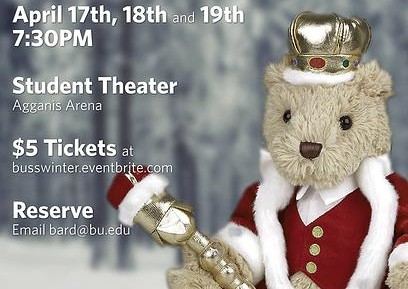 Technically, I can’t review Boston University Shakespeare Society’s Winter’s Tale by William Shakespeare. Former My Theatre (Boston) writer Elizabeth Ramirez directed, and Junior Editor Fabiana Cabral played King Leontes. I have to create boundaries for conflict of interests, and this is one of them. However, read on to hear a bit more about this rarely-produced Shakespearean fairy tale in an exclusive feature.

Beginning in the cold land of Sicilia, King Leontes (Fabiana Cabral) begs his childhood friend, King Polixenes of Bohemia (Hillary Waite), to stay in Sicilia, where he is visiting. Leontes asks his pregnant wife, Hermione (Emma Alden), to convince Polixenes to stay, which she does in a short paragraph, arousing Leontes’ suspicions that Hermione and Polixenes are engaged in a secret love affair. Slowly consumed by his jealousy, Leontes demands Polixenes’ cupbearer, Camillo (Sierra Tempas), poison Polixenes. Camillo warns Polixenes, and, together, they flee Sicilia, angering Leontes more. Leontes imprisons Hermione, and she gives birth to a baby girl while in jail. Hermione’s lady-in-waiting and confidante, Paulina (Meghan Kelly), brings the child to Leontes to beg for mercy. Instead, he orders Paulina’s husband, Antigonus (Amiel Bowers), to take the baby far away in some remote place and leave it to die. Then, Leontes puts Hermione on trial, and, despite a favorable word from the oracle regarding her innocence, Leontes is resilient in his belief of her adultery and treason. However, things aren’t going so hot for Leontes; his first-born son, Mamillius (Nicole Wilkinson), dies, and Hermione faints at the news. Paulina returns to say that Hermione is dead. Antigonus brings the baby Perdita to the distant land of Bohemia, where he is “pursued by a bear” in Shakespeare’s most famous stage direction, meeting his untimely end. The child, however, is unharmed and found by a Shepard (Yvonne Corbett) and his son, the Clown (Tempas), who agree to raise the child as their own. And thus ends an eventful Act I.

Act II is a mess in any production. We open with Time (here, played by all of the actors) telling the audience that sixteen years have passed, and Leontes’ child, Perdita (Katherine Baker), is now a grown woman. Perdita is in love with Polixenes’s son, Florizel (John McCargar). Unbeknownst to Perdita and Florizel, King Polixenes (yes, the same guy from Act I who barely escaped Leontes’ wrath), with his trusted advisor Camillo, crashes Perdita’s sheep-shearing festival and discovers the young prince’s lover affair with a lowly shepherdess. Camillo, pitying the young couple and eyeing a return to Sicilia, convinces Florizel to plead his story to Leontes for moral support. Florizel and Perdita take a ship to Sicilia, but they are followed by Camillo and Polixenes (foiled again!). Meanwhile, Leontes is still bemoaning his fate and his rash decisions that killed his wife and two children; Paulina makes him swear not marry until she says that he may, and he agrees. Once Florizel and Perdita arrive, they are quickly discovered to be fugitives from Polixenes; however, Perdita is discovered to be the lost princess. In a magical piece of theatre, Paulina brings forth a statue of the dead Queen Hermione, which wonderfully comes alive. King Leontes is reunited with both wife and daughter (Mamillius is still dead, bummer). In Shakespeare’s romantic resolution, all is right in this redemption play.

This production was billed as a workshop with minimal set and lights. The company focused on telling the story and developing the expertise to delve into Shakespeare’s complex text. Notably, the director admits that each actor took on the largest or most complicated role that they have ever played to date. Also notable, the production was intended to be an all-female production (though one actor had to leave during the rehearsal process, so Florizel was played by a man). The production (and Director’s Note) does not account for this change, other than to provide ample opportunities to the many more female actresses as part of the Boston University Shakespeare Society troupe. While suitable, I wish that the production had considered and done something with this substantial change.

Overall, Winter’s Tale is one of Boston University Shakespeare Society’s most ambitious undertakings. The play is a complicated mess to perform, complete with complex language and convoluted storylines. No actors can hide in this ensemble show because every character plays a vital role in the play’s progression. This play proved to be an admirable teaching tool, as each actor grew substantially in his or her role. This Winter’s Tale was the beautiful mix of story and heart.