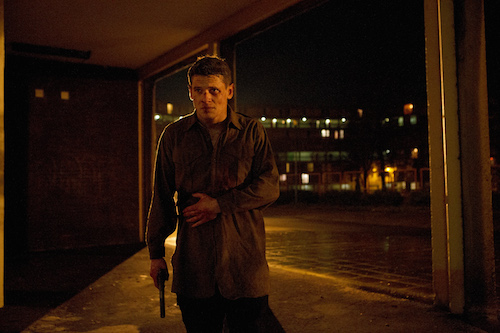 ’71– screenplay by Gregory Burke; directed by Yann Demange
Impish Skins star Jack O’Connell has well and truly left the fun and juvenility of Cook behind him. The whole of Yann Demange’s first feature film is balanced carefully on the shoulders of the 24-year-old about to have his big international moment in Angelina Jolie’s upcoming film Unbroken. Here he plays Gary Hook, a young British soldier who is sent to Northern Ireland at the height of “the troubles” only to find himself abandoned by his unit and alone in the far-from-friendly streets amidst a conflict he knows little about. The strength of Gregory Burke’s script is in its refusal to declare a moral victor between the loyalists and the separatists. The strength of Demange’s direction is in his careful restraint (he avoids what he calls “action film fatigue” by focusing primarily on the stillness between the action). The strength of the film itself is almost entirely O’Connell (second place goes to the location scouting and set dressing departments who perfectly capture the sparse mundanity of a local war). Speaking with reporters for the film’s premiere at last week’s Toronto International Film Festival, Demange heaped huge praise upon the “oldschool” young actor, revealing great admiration built up over what O’Connell characterized as a gruelling low-budget, high-octane shoot that “whipped [him] into shape” and “hardened [him]”. The film is nearly as brutal as the described filming process with sharp emotional turns and visceral carnage piercing the omnipresent suspense. Many of the supporting characters seem confusingly interchangeable and relationships are somewhat murky but Demange smartly keeps a laser focus on O’Connell who carries the audience in Gary’s arms through the soft familial frame and the tense soldierly heart of ‘71.

The Search– written & directed by Michel Hazanavicius
The beautifully expressive, mournful face of 9-year-old Abdul Khalim Mamutsiev carries the emotional heart of this film within a mostly silent performance. It’s impossible not to invest in his newly orphaned character Hadji from the moment he bundles up his baby brother and sets out, alone, on the war-torn roads of Chechnya in search of mere survival. He finds movingly tentative comfort in the care of Bérénice Bejo who plays human rights activist Carole with understated, bubbling frustration and palpable compassion. It’s a truly standout performance from the French actress, best known to English audiences for her role in The Artist (also directed by her husband Hazanavicius), working in perfect harmony with Mamutsiev to portray one of the most delicate onscreen relationships of 2014 so far. The Search examines both sides of its story about Russia’s 1999 “anti-terrorist operations” through a loopy narrative structure that splits the focus from Hadji’s guilt-ridden search for safety to an innocent 19-year-old Russian who is essentially snatched off the street and forced to serve in the military. The two plotlines move in opposite directions- towards and away from the light- as Hadji and Carole grow closer and Kolia (a captivating Maksim Emelyanov) learns to embrace the brutality around him as the only means of survival. The Russian military elements of the film are as brutal as Hadji’s story is moving, an enthralling emotional juxtaposition with a purpose that only comes into focus in the final few seconds. For most of the film, the split perspective seems somewhat random and the moments when we’re pulled away from Hadji to revisit Kolia in his ever-descending misery are frustrating, but, without Kolia, The Search‘s deeper rumblings would be lost in the feel-good sweetness of the more enjoyable plot. Kolia’s story is incredibly difficult to watch but it’s what makes Hadji’s story so remarkable. *My pick for Best of the Fest

Good Kill– written & directed by Andrew Niccol
This is a great movie, with elements of a bad movie occasionally forcing their way in. Ethan Hawke is gruff, conflicted, nearly unrecognizable and brilliant as miserable drone pilot Thomas Egan, living out a safe but morally dubious existence in Las Vegas while longing to be back in a real plane. In both his script and direction, filmmaker Andrew Niccol insightfully updates and subverts the iconography of the modern war movie, portraying explosions exclusively as viewed through a screen with no sound and contrasting tense military operations with commonplace runs to the convenience store moments later (a perk of fighting an overseas war from your own backyard). The subsequent distancing effect is unsettling and intriguing, an excellent window into the muddled headspace of our reluctant hero. The familial subplot is hindered by the unnecessary casting of January Jones but Hawke is too good to be hindered by a single underwhelming supporting performance. For their part, the rest of the cast is superb, especially Zoë Kravitz in the role that most infuriatingly straddles the great movie and the bad movie that are fighting it out within Good Kill. As Egan’s co-pilot Suarez, Kravitz is inspiringly steadfast, level-headed and tough. The film’s most evocative element is a recurring horror witnessed helplessly by the drone team and felt, especially, by the only female member of the unit; the quiet terror and defiant outrage that bubble beneath Kravitz’s composure in those scenes is breathtaking. It’s therefore ridiculous to see such a superb female character reduced so drastically by the inclusion of an afterthought romantic subplot. It’s not even a romantic subplot so much as a groan-inducing pair of scenes in which a character who moments ago flawlessly navigated an emotionally devastating mission abandons all professionalism to throw herself at her superior officer (even the dialogue takes on a B-movie tarnish in these scenes, resorting to atrocious puns like “rest assured, I am first class”). The institutionalized feminist issues here are aggravating, almost more so because they feel so out of place in Niccol’s otherwise complex and human film; it’s as though the two scenes in question were added in a late draft, the result of a bad note from a backwards executive. If Suarez was a generally frivolous character in an inferior film, I could understand the thoughtless and unnecessary inclusion of the damaging subplot (in fact it’s what I would expect from your standard male-centric action flick, depressing as that is). But Suarez is exactly the sort of fantastic female character that should be sharing the spotlight with a male lead as intricate as Egan without sex even needing to enter the film’s periphery, and Kravitz’s performance more than keeps up with Hawke’s star turn. It’s irreparably frustrating, then, that both Suarez and the film are so predictably undermined when they could have been notably great.