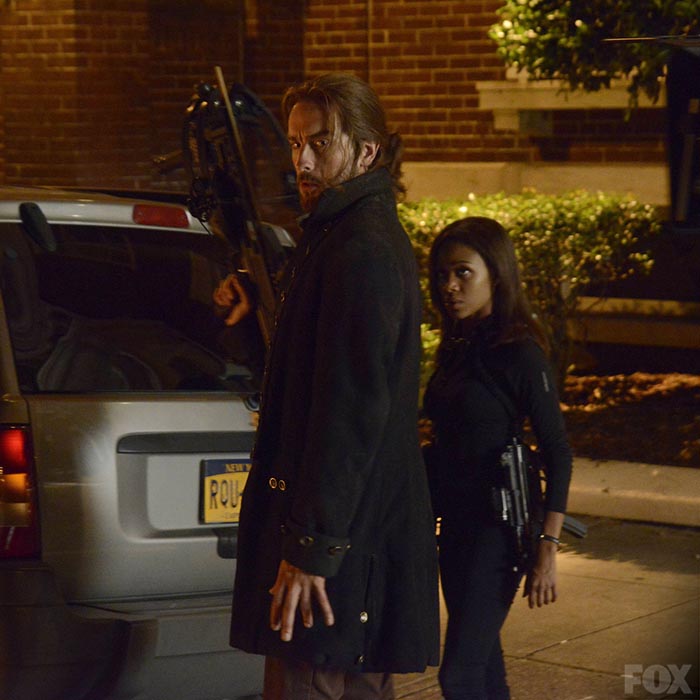 Sleepy Hollow: This is War

Oh Sleepy Hollow. How you were missed. No other show on TV can quite replicate the unique blend of impending apocalypse peppered with history jokes and struggles with modern technology. It feels like forever since the first season finale back in January. But Sleepy Hollow is back, and full of the charm that made the show so fun to watch the first time around.

‘This is War’ solved most of the cliffhangers that the show left viewers on in its first season finale. Season One ended with the main character separated, so when they were brought back together, it felt fitting, since the show upped the stakes and needs its protagonists at their strongest to combat the forces of evil. While the character each had time to prove they were capable of working alone, really, they work best as a team, and it’s good the show recognizes that. There are a still few loose ends – most notably, the fate of Irving, who didn’t even appear in this episode. Excluding Irving might have been a good choice. While Irving is a fantastic character, another subplot in the episode might messed with the flow.

The episode and perhaps the show’s biggest problem is Katrina. In the first season, she was Ichabod’s tragic wife trapped in purgatory, who occasionally popped up to give help. There were several problems with Katrina. One, if she would give straightforward answers instead of saying she didn’t have much time, dropping some cryptic message, then disappearing, she would have been a lot more helpful. Two, she didn’t seem to have much of a personality. And it doesn’t seem like she’s gained on this season either. She could be a really cool character. She’s a witch who’s been trapped in purgatory for two hundred years. It’s actually baffling she isn’t more interesting. But this season, she’s still a damsel, and is (even worse) the Headless Horseman’s prize. Maybe Katrina’s an interesting character, but the show has to give her something to be other than distressed in order to demonstrate that. Right now, every time she’s on screen, it’s an unwelcome break from the other characters who actually do things.

The show might continually struggle with finding something for Katrina to do, but it does have a few things it has done right consistently from the beginning. Some of the best bits come from Ichabod’s struggle with the modern world, and his casual comments about famous figures in American history. Ichabod’s utter disdain for Benjamin Franklin this episode, and his inability to stop himself from making snide comments about the beloved Founding Father was one of the highlights of the episode. Ichabod struggling to adjust to the twenty first century also continues to delight. If Sleepy Hollow decided to do a web series dedicated to Ichabod learning about the modern world, I would watch every episode. There’s something incredibly satisfying about watching a genius character have trouble figuring out how to drive in reverse.

Sleepy Hollow is a very high concept show, and my biggest concern the first season was that as great a show as it is, it would be crushed under the weight of its own ambition. So far, the sophomore season is off to a strong start – balancing its darkness with humor, and knowing not to go overboard with its complexity. Welcome back, Sleepy Hollow.