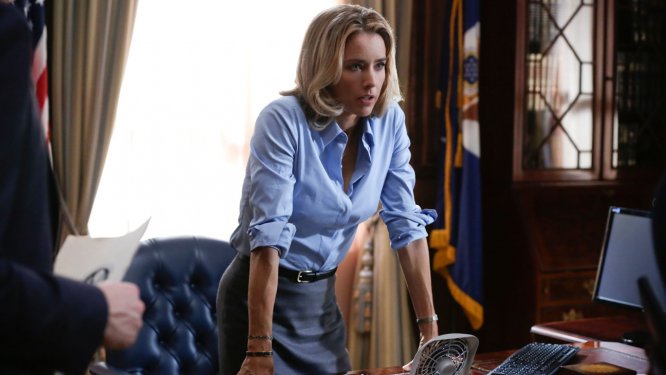 It’s great to see so many Fall 2014 television dramas have, or attempt to have strong female leads. Debra Messing in the Mysteries of Laura, Viola Davis in How to Get Away with Murder, Katherine Heigl in State of Affairs. One of the people to thank for this trend is Shonda Rhimes who raked across the coals in a poorly written New York Times piece, and called “an angry black woman.” Rhimes made strong women in drama “cool.” This is of course not about Rhimes, but rather the new political thriller Madam Secretary starring Tea Leoni in the titular role.

The plane James Marsh Secretary of State, crashes, and President Conrad played by Keith Carradine goes to his former CIA operative Elizabeth McCord (Leoni) to take on the role.

One of the things I genuinely enjoy about this pilot, is that the show wastes no time with the frills, it gets right down into the meat of McCord’s newly accepted job as Secretary of State. Looking beyond the shows poor marketing, which almost made this like a Welcome to Mooseport moment, McCord is someone the President wanted as Secretary of State the first time around. McCord left the CIA and is a teacher because of her lack of faith in politics, and the way the system operated.

The rest of the show’s premise focuses one other main plot, two young Americans, one an activist blogger, who were captured by the Syrians with threats to behead them. Through this story you get to see the modern politics within the White House, from the role in which a woman’s appearance shapes a “news” cycle, to the exorbitant amount of money wasted on White House dinners, and the politics of making decisions on all levels.

There is also a bit of cheese when the boys are rescued, and the montage of their family picking them up, and them kissing the tarmac, it’s a bit much, but I will let this one go as a rookie pilot mistake.

The show at the heart is about politics, but is also a showcase for the way to create a drama with a strong female lead. The success comes with the one-two punch of creator Barbara Hall, and Tea Leoni. Hall was the creator and producer of another acclaimed CBS drama Joan of Arcadia; she is also a co-executive producer of Homeland. Hall’s resume reads like a strong billing for how to create great female characters in television history, and it looks like she can add Madame Secretary as another marker of success.

While Hall gives the behind the scenes gusto, its Leoni who packs the biggest punch, and makes this show must-see for me. From her time on the Racine Bells in A League of Their Own, to her underrated role in disaster film Deep Impact, and the television series Fired Up, Leoni has been a scene stealer for a long time.   In Madam Secretary she is front and center, and sells every second of this pilot. Leoni is fantastic, and she plays a character you want to win. Leoni is down to Earth character, but it isn’t some dumb home spun Sarah Palin; but rather a smart person who addresses issues and takes things head on. I especially love the scene in which she addresses the growing HIV/AIDs epidemic in Africa through one of those unnecessary State dinners.

Madam Secretary is on the right path, and I think this could be one of the best choices CBS has made, it’s not another run of the mill CSI, or NCIS,, but rather another smart female driven drama. Pairing this show with The Good Wife is brilliant, I will be going back for more.