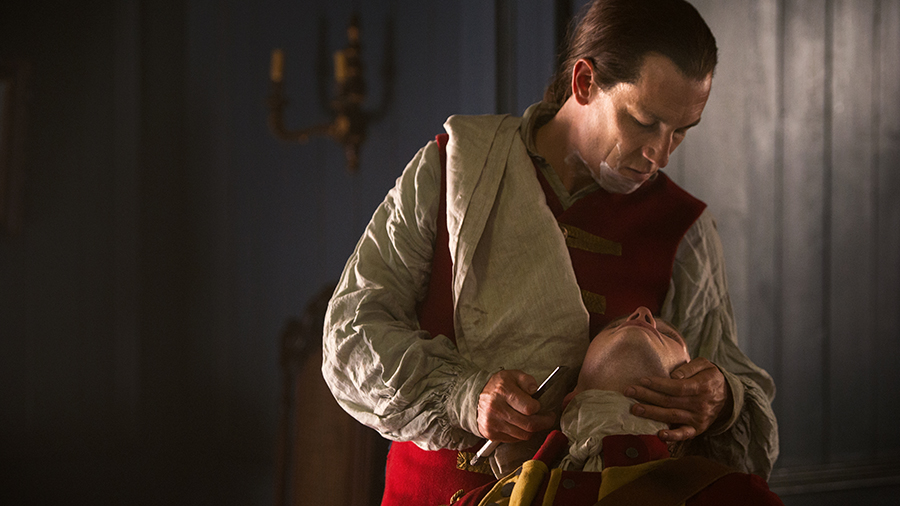 With only two episodes left before its hiatus,Outlander is stepping things up, raising the stakes, and setting the characters on paths they can’t come back from. (Spoilers ahead)

Claire is still stuck in the 18th century. As soon as she starts having an internal monologue about how close she is to getting back to her own time period, it’s inevitable something will go wrong. This time it was largely her own fault. Claire always expresses her opinions, even if they go against what everyone else is saying, which is fine if you’re somewhere you know that is safe. If you’re in the 1700’s Scotland when tensions are high and everyone is already suspicious of you, maybe it’s time to tone it down. Vehemently defending the Scottish cause in a room full of British officers, including one you know has it out for you is probably not a brilliant idea. In fact, it’s a really, really bad one. It’s not the first time Claire has been in a bind because she lost her temper, but this time, it cost her her ticket home. And landed her in hot water with Black Jack Randall.

Claire fumbled through Black Jack Randall’s interrogation. For someone as smart as Claire, and for someone who has been able to consistently stick to her cover story and think on her feet, her attempts to fool Randall were clumsy. Not that I blame her for being nervous, because holy crap. Black Jack Randall is terrifying. Sorry your husband’s ancestor (who happens to look exactly like your husband) is a sadistic psychopath, Claire. That’s awkward. Kudos to Toby Menzies for being able to play the sweet and doting Frank and the evil Black Jack Randall both so convincingly.

It shouldn’t have surprised anyone to discover Randall’s true nature is scumbag. The first time he met Claire, he tried to rape her. And contrary to what Frank thought in the pilot episode, “Black Jack” is not a dashing nickname. It sounds like a pirate name you give to someone who has done awful things. Menzies has done amazing work on the show so far, but this episode took his performance to another level. He recounted to Claire a time when he whipped Jamie and declared that it was a “masterpiece” and woke up a darkness in him. Despite his chilling story which sounded like page one from a serial killer origin story, Claire wanted to believe that Randall could still be a good person and redeem himself. Unfortunately, Randall is a crazy person who is really embracing his dark side.

With Randall hellbent on having Claire arrested, the only way for her to stay safe is to become Scottish, by marrying a Scot, so she’s protected from English law. If only there were a strapping Scottish lad around. Maybe one who worships the ground Claire walks on who would only be too happy to marry her and would probably be willing to die to protect her. Where can you find one of those on such short notice? ….Well, Jamie is always nearby. (You know, like when he was sleeping outside Claire’s door to make sure no hostile town-folk tried to attack her. Or the other like hundred times he’s swooped in to rescue Claire). He quickly agrees to do it because they’re “friends”. It’s just one pal helping out another pal. Claire feels bad that Jamie has to marry her, and asks him if there isn’t someone else he would rather marry. Come on, Claire. Get your head in the game. Any time Claire so much as glances in Jamie’s direction, he lights up like a Christmas tree. You know. In a “friendly” way.

It’s nice that the Claire/Jamie storyline is finally moving forward. It was inevitable, really.They will undoubtedly face other problems that will come from Claire being a time traveller and Jamie being a fugitive from English law, so getting to see them tackle these problems together now that they’ll soon be past the will they/won’t they phase of their relationships is an exciting prospect. One of the reasons Outlander is arguably so successful is that Claire and Jamie work so well together. Claire and Jamie’s story is very much at the center of their show, so as their relationship progresses, the show will too, which can only lead to more exciting things to come.