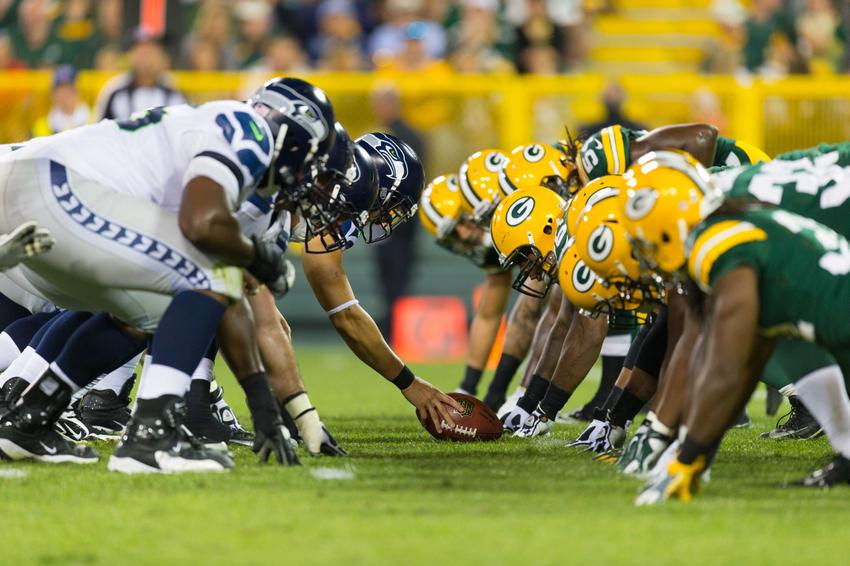 The NFL Returns: Week One

It unites and destroys. It can create friendships through the unlikeliest strangers or add scars to fierce loyalties. It has given thousands hope while bringing others to their knees. It embodies tradition, respect and hardworking values. It’s a religion, a way of life, and the air that the die-hard believers breathe. It portrays the spirit of America and on Thursday, September 4th, football was finally back.

The much-anticipated 95th season of the NFL hit the ground running this past week with the Seattle Seahawks defensively reigning over the Green Bay Packers. The Seahawks, defending Super Bowl XLVIII champs, won 36-16 on home turf. The game marked the annual kickoff of football season, that beautiful time of year where Sunday’s are reserved for beers, wings, skittles, tailgating and shouting at televisions. Passion is an understatement when it comes to some fans and the intoxicating sport, with team loyalties driving record sales. Star players draw fans in with sheer talent, gruff personalities and crazy antics. Football is a whirlwind of a sport; it takes the audience on a roller coaster of emotion through shocking losses, surprising wins and riveting drama on and off the field.

Playoff season starts on January 3rd, 2015 with the Super Bowl XLIX occurring on February 1st in Arizona at the University of Phoenix. However, there are still four gripping, adrenaline-fuelled months to go. So what did the start of the season have in store for it’s pulsating fanbase?

A week into it, with no teams on bye, the first Sunday has already proved to be doozy. The New England Patriots fell to Miami Dolphins through a lack of defensive tackling, despite the supposed reconfiguration. The Dolphins did have some beauty plays though, which resulted in their 33-20 win. Likewise, the Denver Broncos topped the Indianapolis Colts 31-24. However, it was not without struggle. Albeit a 24-7 lead going into the second half, the Broncos went three-and-out and only scored once during the last two quarters. Thankfully, their defense came in strong, which led to the notable win. The Colts loss marked a historic event for Peyton Manning, as the Bronco is now the second quarterback in the NFL to beat all 32 teams. Brett Favre, who spent most of his career playing for the Green Bay Packers, was the first to reach that milestone before retiring in 2010. While the Bronco’s celebrated a win in more ways than one, Sunday also saw the Bills rise to the occasion with a close 23-20 to the Chicago Bears. The Dallas Cowboys followed the Bear’s suit and fell 28-17 to the San Francisco 49ers. Arguably making some of the best quarterback plays of the week, Matt Ryan of the Atlanta Falcons came out on top as his efforts as quarterback led to a 37-34 win over the New Orleans Saints. Other successors were the Minnesota Vikings who demolished St. Louis Rams, 34-6 and Houston who trounced the Washington Redskins 17-6. Joining the ranks of 1-0 teams were the Steelers who closed a tight game against the Cleveland Browns, 30-27 and the Philadelphia Eagles. The Eagles flew above the Jacksonville Jaguars with an end game of 34-17. When the first Football Sunday came and went with devastating losses and anticipated success, Monday followed suit. The Arizona Cardinals led a close charged game against the San Diego Chargers with the overall score of 18-17. On the contrary, the New York Giants are now standing 0-1 as they succumbed to the Detroit Lions through a painful 35-14 loss.

Week 1 of the NFL regular season wrapped up an emotionally charged start to the season. There was some jostling in the AFC East standings as the Dolphins and Bills both came out on top, leaving the Patriots and Bears to scramble. The pot was also stirred in the NFC East as the NY Giants joined the shaky offensive realm of Washington and Dallas. Hopefully, the three teams will step it up so the division can once again be a hub of stellar football. It has the ratings, but not always the wins. Overall, it was a week of great football with some memorable plays, starting the season off with the tumultuous shakeup of sweet success and bitter loss that fans come to expect. The start of Week Two will see the Pittsburgh Steelers face the Baltimore Ravens as they fight for standing in the AFC North on Thursday September 11th. This coming Sunday will bring division battles of the early season as teams assert their dominance in the standings, so make sure your beer is chilled, you’re going to need it.

For the top ten plays of Week 1, check this out.