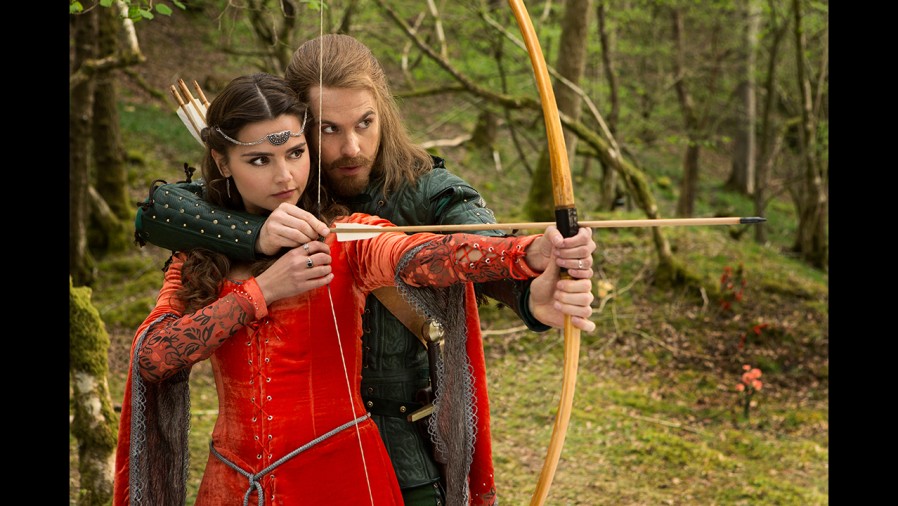 Doctor Who: Robot of Sherwood

The latest episode of Doctor Who offered a swashbuckling new twist on an old legend when the Doctor and Clara met Robin Hood. It was a worthy continuation of the show’s tradition of updating history/legends with a sci-fi twist.

Robin Hood seems such an obvious candidate for Doctor Who. The beloved folk hero has pervaded pop culture and been told and retold dozens of times. Seeing as it has such a foothold in British literary history, it’s a little surprising Robin Hood wasn’t featured before. While the episode didn’t offer a new take of the character of Robin, that’s to be expected. Often times with famous figures in Doctor Who, it’s about taking a well-known person or character and inserting them in a sci-fi situation, not radically reinterpreting them. Robin Hood was…well Robin Hood. He shot arrows and hung out with his Merry Men and annoyed the Sheriff. It was exactly what you would expect out of Robin Hood, which was good. The bickering that ensued between the Doctor and Robin (who are both alpha males) was funny, and at the end of the day, they worked well together and saved the world. The episodes also had a lot of nice moments for Clara, who had the unenviable task of babysitting the two men. She was deemed by the enemy to be the ‘ringleader’ since she was the most level-headed out of the three, and when she was brought in for interrogation, was able to flip the tables and gather information on the Sheriff’s plans.

In a nice continual of this season’s arc so far, the Sheriff’s plans involved killer robots, desperate to get to the ‘promised land’, which was pretty much the plot of the first episode. (Though fortunately, the robots this time wanted gold to fix their ship, instead of human parts fo fix themselves.) It was a good way to tie this episode into the rest of the season, rather than have it just be a fun standalone.

The conclusion/solution to this episode was a little cheesy, but honestly, it was what you should expect when you heard Robin Hood would be on Doctor Who. (Hint: it involved an arrow). There was a serious moment between Robin and the Doctor when they discussed the nature of being a famous figure and heroism. The conversation wasn’t a bad one; indeed the idea that famous heroes themselves are complicated and gray but are able to inspire heroism in others is an interesting concept to explore. The problem is that exact conversation happens over and over again. Verbalizing these ideas is only necessary once or twice. It’s telling, not showing a theme that has been explored over and over. Again, it’s a very valid and interesting theme to explore. What’s not interesting is having very similar conversations reiterate the point over and over again. This seems to be a recurring problem where the show repeats plots or dialogs that in and of themselves aren’t bad, but because they have been done so many times before, are boring.

Still, by itself, ‘Robot of Sherwood’ was a strong episode. It was funny, it was fun, and at times heartfelt.