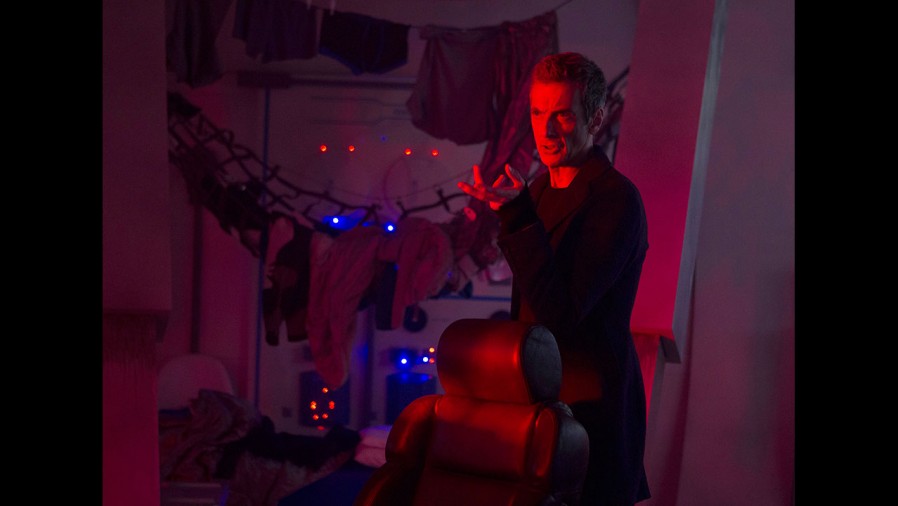 This week, Doctor Who delivered one of the most genuinely creepy episodes in a very long time. Although it fumbled the ending a little, most of the episode was the right balance of freaky and funny to make it an overall enjoyable episode. (Spoilers ahead).

The Doctor wonders why you talk to yourself when you know you’re alone. The answer is, because you know you’re not really alone. People have nightmares of something grabbing them from under the bed, except these nightmares aren’t dreams at all. The Doctor hypothesizes that there is a species out there that has perfected hiding. They can be there constantly, and no one would ever know. The premise of the episode utilizes a classic psychological horror concept the show has used to great success in the past. It was reminiscent of fan favorite episode ‘Midnight’, when the monster is never seen. Whatever the audience conjures up in their imaginations is infinitely more terrifying than anything a costume or make up department could put on screen. The closest visual was of a small child-sized thing, covered from head to toe with a blanket. Creepy.

The scare factor was well-balanced with humor and cuteness. Clara and Danny Pink finally get drinks together, but they both keep putting their foot in their mouth. It’s awkward enough, but time travel of course complicates things and amps up the awkwardness. First Clara accidentally meets Danny when he was a kid, then she meets Orson, who may or may not be her and Danny’s great-grandson. Jenna Coleman and Samuel Anderson play off each other really well already. It’ll be interesting to see how Danny reacts when he finds out Clara travels through time and space for fun, which will hopefully happen sooner rather than later.

Coleman also got a chance to shine when she interacted with Danny and the Doctor when they were kids. She was able to sooth both of them after they were awoken by nightmares and helped them be brave. While neither Danny or the Doctor would remember their experience, it’s important that Clara taught them something they would subconsciously carry with them into their adult lives.

Peter Capaldi keeps getting better and better as the Twelfth Doctor. He has so many tiny little blink-and-you-miss them characterization moments, not to mention a bunch of one liners he half mutters under his breath. This episode’s best was when he was informed you can’t find Waldo (or Wally, apparently, in the UK) in every book you read and he grumbles that’s a few years of his life he’ll never get back. He could so easily be just an angry curmudgeon, but Capaldi breathes quirks and subtleties into his performance that make Twelve such a treat to watch.

Despite all this good, the episode floundered a bit at the end. After interacting with the Doctor as a kid, Clara found adult-Doctor and declared there never was a monster. It was just a nightmare he had as a kid, and he’s been obsessed with it ever since. After all, Clara knows in this case, she was what was under the Doctor’s bed. The problem with this solution is there was definitely something else out there. There was chalk that was moved around and strange writing on chalkboard. There was banging outside a space station at the end of time and the universe when everything was supposed to be dead. (How many times is the show going to visit the end of time/the universe? Stop being so dramatic all the time, it makes it less effective). Those could all be explained away with creaking pipes, which fair enough. Or the Doctor wrote on the chalkboard then forgot. Flimsy, but possibly feasible. But how do you explain the creepy blanket kid that was standing right behind them then disappeared with a flash of light?

Clara’s monologue to child-Doctor was touching. But the way she came back after it and told the Doctor to drop the whole thing made it seem like she believed there never was anything there, and the audience should believe it too. Hopefully the hidden monsters are part of a larger storyline, or it feels like a cop out. The ‘twist’ that there wasn’t anything out there could have worked, except for the fact the audience saw a physical entity in the room with the Doctor, Clara and child-Danny. If it is a ‘to be continued’ problem, the way the ending was presented with such finality is a little weird, and makes me nervous that it’s a plot hole. Maybe the entities aren’t what the Doctor thought they were, but there’s still something that needs to be addressed here.

That being said, the season as a whole has done a decent job of weaving the episodes into the fabric of a larger story that is still unfolding. But the mysterious entities of this episode don’t obviously relate to the greater Promised Land arc of the season. That doesn’t mean they don’t/can’t, especially since the details of the Promised Land are still so vague. This episode also had a weird twist that the barn the Doctor used to sleep in as a kid was the same barn he returned to in the 50th Anniversary special to destroy Gallifrey. It felt like a really random detail to throw out there, so maybe it was meant as a bonus, or maybe it has some greater significance. We’ll have to wait and see.